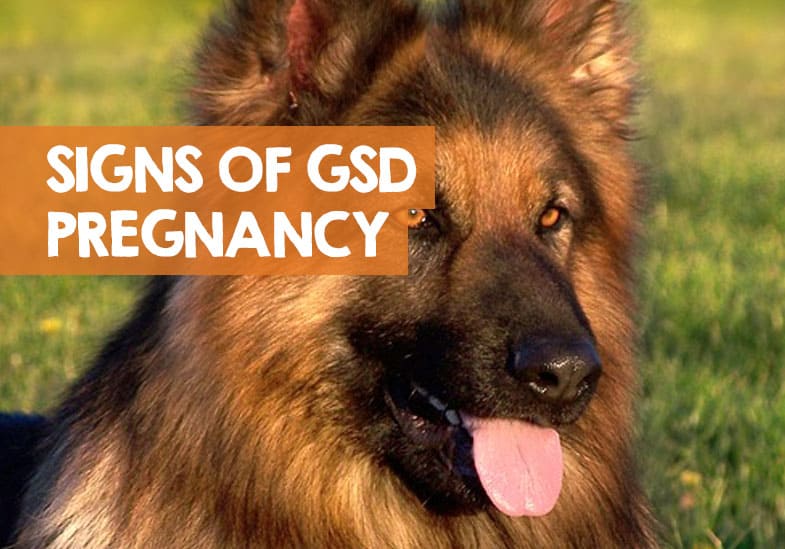 If you read on you will find out what the early gestation signs are, what the German Shepherd pregnancy stages are, and how you can make her as comfortable as possible.

The early signs of a German Shepherd pregnancy

None of the methods above are fool-proof checks to tell whether your German Shepherd is pregnant and expecting a litter of puppies though. Instead vets and breeders rely on more scientific methods to test for pregnancy, including German Shepherd ultrasounds, all of which you can see below.

How to tell if a German Shepherd is pregnant

To check for certain if your German Shepherd is pregnant, there are two methods which will offer 100% proof of pregnancy.

The fastest method for finding if your German Shepherd has conceived is to get your vet to perform a German Shepherd ultrasound. This scan can be first done 3 weeks after mating, but at this early stage it won’t always be 100% accurate – the best results come with an ultrasound at least 25 days after conception.

Ultrasounds are pain-free, but it can be a stressful occasion if your German Shepherd doesn’t like the vets as their belly hair will be shaved off.

The costs of an ultrasound pregnancy check tend to range between the $300 to $500-dollar bracket (£230 to £380 GBP). It’s not a cheap method, and many people will simply wait until their German Shepherd is showing more obvious signs of pregnancy rather than paying for a scan.

2. Blood sample at 5 weeks after mating

The second option for a pregnancy test is using a blood test. This can be performed after 5 weeks post mating and will help to detect a pregnancy hormone in your German Shepherd.

It doesn’t cost as much as an ultrasound but isn’t always accurate when done too early on. For example, if your German Shepherd has been pregnant for less than 35 days, it might flag up as being negative, even if she is pregnant.

What is the most reliable German Shepherd pregnancy test then?

The most accurate way to know if your German Shepherd is pregnant is the first option; the German Shepherd ultrasound. However, it should only be done after 25 days post mating, otherwise it might throw up an inaccurate result.

One the best things about this type of pregnancy test is how you can see the developing puppies on the scan images. You might also be able to tell at this point how many puppies your German Shepherd is expecting, although it might not always be an exact count due to their size and overlapping in the womb.

If you wait another 20 days, but day 45 you can also get an X-ray of the pregnant German Shepherd. This will let the vet count the skulls in the womb, giving a 100% accuracy count on how many puppies are in the litter.

Once you know your German Shepherd is pregnant, the excitement can really start. But what can you expect from the German Shepherd pregnancy stages? Here’s a quick overview of each stage.

The first month of your German Shepherd’s pregnancy isn’t actually that interesting, and a lot of the time you might not even notice anything at all. Some owners won’t even know their German Shepherd is pregnant without the aid of an ultrasound.

The 22nd day will typically see the German Shepherd fetuses starting to form, and around the 29th day, vets are able to detect heart beats using an ultrasound scan.

Your German Shepherd will now 3 weeks pregnant and should start showing some of the pregnancy signs I spoke of earlier. At this point those signs may even change a little to be:

Whilst these are typical signs of German Shepherd pregnancy, not all German Shepherds will exhibit these. It’s still very early on in the pregnancy and can be hard to detect properly.

Handy Hint: German Shepherds can actually have false pregnancies. I wrote a guide which includes information on what to look for and how long a dog’s phantom pregnancy can last.

The second month is where the pregnancy signs start to accelerate with the eyelids and toes appearing on the fetuses between the 32nd and 35th day.

The development is very rapid, as by day 40, the German Shepherd fetuses will have grown claws, and by day 45 have a skeletal form and even a coat.

You could ask your vet to perform an X-ray on the 50th day as it will be possible to use this to check how many puppies your German Shepherd is expecting. It’s very exciting, as you can now plan for the litter size!

By the 58th day, your German Shepherd will start her nesting behavior. This is where she starts looking for a safe and comfortable place in the house to give birth. Owners can help their dogs with added bedding, heat lamp, and creating a more secure environment for them – here’s what you need to know about whelping boxes.

It should now be outwardly obvious that your German Shepherd is pregnant, as she will certainly now be showing a rounder belly.

More signs of German Shepherd pregnancy at this stage include:

The third month is when you can ratchet up the excitement. You will definitely now know that your German Shepherd is pregnant, as there’s no mistaking it in this stage.

Yep, you guessed it, during this German Shepherd pregnancy stage she will be giving birth. The puppies will start to move into position to arrive as by the 58th day they are almost completely formed – they will move into the birth canal for the last few days of pregnancy.

The signs during this stage you will start to see include:

There will be plenty of behavioral changes in your German Shepherd too, not just physical ones. For example, as she enters the last 14 days of pregnancy you might see the following signs:

How to prepare for a German Shepherd pregnancy

As a breeder or owner, there are things you can also do to make sure your German Shepherd is ready to have a comfortable pregnancy and then give birth safely. These preparation tips include:

How German Shepherds give birth

The most common way that a German Shepherd will give birth is naturally. However, due to complications, some might need a c-section. Here’s an overview of what that might mean.

This technique is used in a small amount of German Shepherd pregnancies. Your vet can help you to decide if this is the best option by using an X-ray to check how large the skulls are, and how many puppies are expected.

If you decide to let things happen naturally after consultation with your vet, look out for the warning signs that your German Shepherd is ready to give birth to her litter.

If it’s time for your German Shepherd to give birth, then make sure her nest is completely ready. You will notice that she will start to visit her nest several times, returning back and forth to the area, scraping the towels several times, and then finally settling down and panting like she’s just had a lot of exercise.

This is not a calm time for her at all, and you will notice heavy breathing and an increased heart rate. It can take up to 12 hours for the first of the puppies to appear.

After a puppy has been delivered, the German Shepherd mother will bite at the sack and lick the excess away from the puppy. This lets the newborn start to breath in oxygen. Some owners might have to help with this if the mother struggles to do so.

You might even see the German Shepherd mother eating the sack and umbilical cords. Don’t be alarmed, as they actually contain nutritional elements and it’s entirely instinctive.

Once the German Shepherd puppy is out and moving, you can help my placing it onto the mother’s nipples to let them start feeding.

Whilst most births should go without a hitch (if recommended by a vet), there are warning signs that the delivery isn’t going to plan.

For example, if 10 hours have passed since she nested and sat down and you still haven’t seen a puppy, it could mean a blockage in the birth canal. This will then require an emergency c-section.

Handy Hint: If you do opt for a natural birth and encounter complications you will have to pay for an emergency c-section which will be far more expensive than if you had just booked one in to start with.

Knowing when your German Shepherd is pregnant is absolutely essential. If you don’t know she’s expecting, you can’t prepare her for the birth, and could put her and the litter at risk of miscarriage.

When it comes to the birth itself, most breeders I have spoken recommend a natural births.

If you do have a pregnant German Shepherd, then I wish you and her all the best and would love to see some photos of the pups!

Here are some more guides for owners of this breed.