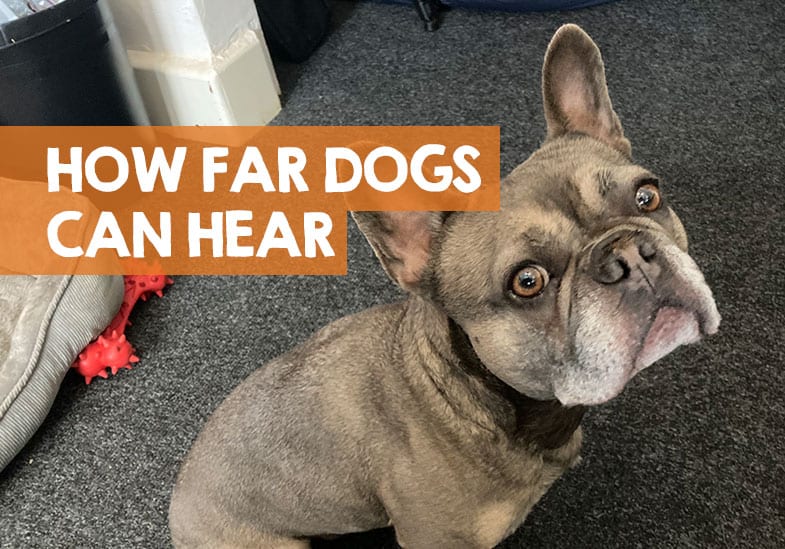 Have you ever noticed that your dog suddenly gets scared for what seems like no reason? It’s not until you then hear the thunder getting nearer to your home, that you figure out what the issue was. Your dog will have heard thunder or fireworks well before you do as their hearing is so good.

But just how far away can dogs hear compared to us humans? In truth, it’s a complex subject, so I’ve attempted to answer is best as I can in short, then with more detail lower down the page.

How far away can dogs hear? Dogs can hear 4 to 5 times further away than humans can. That means dogs can hear fireworks, thunder, or a whistle well before us. In fact, dogs could hear thunder as far away as 40 miles on a clear day and if the conditions are right.

In simple terms, if you can hear something, your dog will already have heard it from much further away. This will also depend on factors such as weather conditions including wind, obstructions, background noise, and the pitch of the noise.

A dog’s sense of hearing is between four and five times stronger than a human’s hearing ability.

How far away dogs can hear (more research)

I did some additional research on this topic about the incredible hearing ability that dogs have so that I could share my findings with you today. In this blog, you can find out how far away a dog can hear and the types of sounds your pooch can detect.

How many miles away can a dog hear?

A dog’s ear is made up of three parts. The outer part of a dog’s ear consists of the pinna which is the part that amplifies sound and transfers it to the ear canal.

Finally, there is the inner ear that has the cochlea which is the hearing organ and the vestibular system. There are about 18 muscles that control the direction and movement of a dog’s outer ear.

This allows dogs to change the shape of their ears to capture sound.

Humans don’t have the same hearing ability that dogs have so it can be impossible for you to hear sounds that are a mile away. So how can you tell when your dog is hearing something far away that you can’t?

A sure sign is when your dog’s ears change shape or when they’re perked up.

A dog’s ears will always react when they’re hearing something in the distance. You can also determine whether your dog is hearing sounds in the distance by their body language. This will depend on the type of sound he or she is hearing.

Additionally, it depends on the breed of dog you have.

Some dog breeds will jump up and down and bark. Smaller puppies may run to their owners for protection. Other dog breeds won’t react to every sound they hear. In this case, you’ll simply notice your dog’s ears perk up and then relax again.

Handy Hint: Recent research  suggests that dogs might be able to sense when an earthquake is coming.

What do frequencies have to do with a dog’s hearing?

Every sound has a pitch which is determined by its frequency wavelength. These frequencies are measured in Hertz (Hz). A single wavelength cycle is measured at 1Hz. Lower pitched sounds will have a lower Hertz measurement.

On the other hand, higher pitches will have a higher number of Hertz.

However, the average dog can hear pitches between 40Hz and 45,000Hz. This is the reason why a dog can hear a pitch that’s too high for human ears to detect.

How do dogs react to the human voice?

The average human’s voice has a frequency between 350Hz and 3000Hz but some people have a pitch of 50Hz.

How far away can a dog hear a whistle?

Some dog trainers use a whistle to give their dogs a series of commands which works well for hunting dogs. Using a whistle is an excellent method of training if your dog is unable to follow verbal commands. Whistles provide a distinct high-pitched sound that trainers can adjust.

Depending on the type of whistle you have, your dog can hear the pitch of the whistle as far away as 400 yards. But some dog owners may be concerned about the effects a whistle will have on their pet’s ears. As long as you don’t blow the whistle when the dog is close to you or for long periods it shouldn’t harm your dog’s hearing.

How far away can dogs hear thunder?

Some dogs are afraid of thunder because they’re not sure what the sound is so they perceive it as something threatening.

Veterinary experts suspect that dogs are afraid of thunder because of a combination of thunder, lightning, wind, static electricity and barometric pressure changes and low-frequency rumbling that humans can’t hear.

There is also a theory that dogs experience shocks from static buildup before a thunderstorm.

If your dog is stressed before or during a storm, make sure you have what you need to calm your pet. A lot of owners rely on a product called a Thundershirt for their dogs.

There are all-natural calming medications on the market for dogs that suffer from anxiety before and during a storm.

Since dogs have such a keen sense of hearing, they can detect a storm between 15 to 20 minutes before it happens.

A dog’s sense of smell can also detect when a storm is about to happen because of the scent of rain. There is no definitive distance as to how far a dog can hear thunder.

How sensitive are dogs to the sound of fireworks?

Fireworks are loud even for a human’s hearing. So, you can imagine how high these sounds are to a dog’s ears. The high-pitched wail when the fireworks are ignited to the loud bangs when they explode in the sky is perceived as a threat to a dog and triggers their fight or flight response.

Some dogs experience anxiety when there are fireworks, and they may run and hide under furniture.

How far away can dogs hear fireworks

Can dogs hear and recognize voices far away?

Studies have shown that dogs can recognize an individual’s voice whether they hear it in person or over a video call. However, dogs are far more responsive to the tone of voice rather than specific words being spoken. That’s why some dogs get excited when you use a specific tone of your voice.

Your dog can also detect whether you’re happy or sad by detecting certain tones when you speak. Dogs will respond to the specific tones in your voice. That’s how trainers get dogs to respond to command words because of their volume and tone.

So, it’s not that your dog can understand your language. Canines simply have incredible hearing abilities that allow them to detect different pitches that get them to react.

Dogs are fascinating pets. Not only do they have a keen sense of smell, but they also have powerful hearing abilities. If you ever notice that your dog seems to bark for no reason, but it could be that they’re hearing something you can’t.

And that thing they are barking at, could be further than you originally thought; dogs really can hear far away.