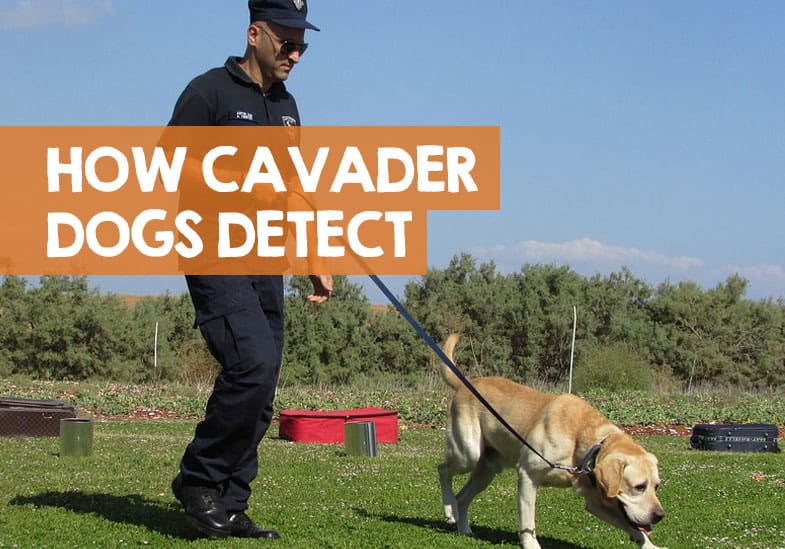 Cadaver dogs are trained to find dead bodies and have become an essential part of law enforcement. Cadaver dogs can track and smell scents that humans can’t, such as bodies sometimes a long time after death.

However, cadaver dogs do need to be put into action quickly to find the human remains of a body if police are looking for evidence to catch a dangerous killer. But that doesn’t necessarily mean cadaver dogs cannot detect bodies long after death has occurred.

The bottom line is cadaver dogs can be trained to detect human remains the moment the body starts to decay. But do you want to know more? I do, it’s a fascinating topic, and they can even smell through water, their senses are that good.

Cadaver dogs and how they can detect death

I’ve been wondering how a dog can detect human remains especially in ancient burials that may be many feet underground. I have done a lot of research into cadaver dogs and would like to share what I’ve found with you.

How accurate is a cadaver dog’s sense of smell?

If a cadaver dog is trained exceptionally well, the dog will seldom be wrong. Handlers have stated that cadaver dogs have 95% accuracy when detecting human remains.

So, if a cadaver dog is barking and showing signs to go in a certain direction, there’s a good chance they will find a body or human remains.

What’s more, a cadaver dog can detect remains as far as 15 feet underground. That’s deeper than a standard grave!

How long does a body have to be dead for a cadaver dog to smell it?

Research would suggest that a cadaver dog can detect a body that has been dead for as little as 24 hours. This is due to the fact that cadaver dogs are trained to detect for the scent of a decomposing body.

The human decomposition process begins to start between 1 and 3 days.

What does a cadaver dog smell?

Cadaver dogs are trained to smell human remains. This can include decomposing bodies or body parts such as blood, bone, and tissue.

A very good cadaver dog can detect a body that has been dead for just a few hours.

The scent of a dog is powerful enough to tell the difference between a living body and a recently deceased person. Therefore the dog can sniff out the remains and locate its whereabouts easily.

How long after death can cadaver dogs detect human remains?

New York State Police were working on a case back in 2014 where they were looking for the remains of a victim that was kidnapped in 1994. Cadaver dogs signaled to their handlers when they reached an area behind a cabin.

A bulldozer was brought in to dig up the surface and low and behold a body was found buried 15 feet underground.

Can cadaver dogs smell through water?

Since the 1970s, cadaver dogs have been used by law enforcement to help to smell and detect for bodies. A cadaver dog’s amazing ability to smell, also extends to through water. In fact, studies have shown that cadaver dogs have 95% accuracy when detecting objects and bodies – many times in underwater scenarios.

“Based on dogs’ greater olfactory ability to detect and process odors, this method has been used in forensic investigations to identify the odor of a suspect at a crime scene. The excellent reliability and reproducibility of the method largely depend on rigor in dog training.” (view source)

A cadaver dog can detect remains 15 feet underground, with the dogs being able to smell bodies that are 30 meters through water.

Human cremains (burnt bodies) have a distinct scent that cadaver dogs are trained to detect and locate. Cadaver dogs can easily locate the burnt remains in a building that has been destroyed by wildfires.

This is because a canine’s sense of smell is 100,000 times more powerful compared to a human’s sense of smell. Dogs have millions of scent receptors that help them identify different smells in any environment.

Dogs can sniff out subtle odors that humans can’t detect. Research shows that dogs can detect one drop of liquid such as blood or chemicals in 20 Olympic-sized swimming pools. So it’s no surprise that a cadaver dog can sniff out burnt remains in forests or houses destroyed by wildfire.

According to National Geographic, cadaver dogs can also smell for cremated ashes. This is based an article they published in 2018 which explained how sniffer dogs were able to find human remains even after wildfires in California.

“When wildfires sweep into a neighborhood, there is no time to collect valuables. Homeowners flee with bare essentials. Among the precious things that must be left include cremated remains, or cremains, often stored in a receptacle kept on a shelf or mantle. But now, professionally trained detection dogs are being dispatched to recover these human ashes from the charred ruins of destroyed homes.” (view source)

How are cadaver dogs used in the archeology industry?

In archeology news, a canine was used to sniff out 3000-year-old graves located in Croatia. An archeologist previously found other gravesites along Croatia’s Adriatic coast but wanted to find more. But there was too much terrain to randomly start digging.

The archeologist contacted a cadaver handler to see if canines could detect the burial grounds. They tested dogs by allowing them to sniff the area where they had dug up three graves previously that were no longer open.

Two dogs working on the project were able to locate the three graves quickly. They then allowed the dogs to sniff areas where they thought other graves were located. The dogs located six new graves that the archeologists couldn’t find before.

These new graves only contained small toe and finger bones that were inside stone chests. This simply proves how powerful a cadaver dog’s sense of smell is. The two dogs could locate only a few small skeletal remains that were buried underground in stone chests. And these remains were thousands of years old!

This is an amazing example of just how long after death, cadaver dogs can detect bodies.

Can a cadaver dog detect the difference between humans and animals?

Cadaver dogs are trained to work on sensitive police cases. The dog is taught to find remains quickly and so they can’t be distracted by other types of remains such as animal carcasses. That’s why a cadaver dog is only trained to detect human remains.

Furthermore, a cadaver dog can detect the difference between human remains and decomposing animals in the area.

There are most likely plenty of animal remains underground especially when police are scouting forests. The dog will only sniff out the remains of a human so as not to waste time.

How are cadaver dogs trained?

Air scenting is when a dog can sniff out a body’s scent carried by the wind and then follow the scent to locate the remains. When training a cadaver dog, certain chemicals are used to simulate the smell of decomposing human flesh. These chemicals are only used by specialized training facilities.

What dog breeds are used for cadaver dog training?

German Shepherds are the most common dog breed for any type of police work. These canines are used to sniff out narcotics, cadavers and they’re used in search and rescue missions.

This is because German Shepherds are fast, intelligent and fearless. These canines can work long hours without getting tired.

A Beagle is another popular K-9 dog because it has a small stature. This means they’re able to fit through places that humans can’t. Since they’re lightweight dogs they’re also easier to lift.

The Beagle is a fast and excellent tracking dog. That’s why they’re used to sniff out bodies and illegal substances – and their long ears help them to do this.

Lastly, Border Collies are also popular dogs to work with police because they’re extremely energetic and easy to train. These dogs are excellent for finding human cremains. This means that the dog can detect burnt human remains and find their location in burnt buildings or environments.

According to experts cadaver dogs are rarely wrong. However, they’re not always 100% accurate because they can make mistakes from time to time. But if the dog gets the proper training and works regularly they will be able to reach their average of 95% accuracy rating.

It will all depend on the breed that’s used, how many hours a day the canine is trained and how it’s trained.

However, it goes without saying that if there are human remains, no matter how soon or long after death it’s been, there’s a good chance the cadaver dog will detect.