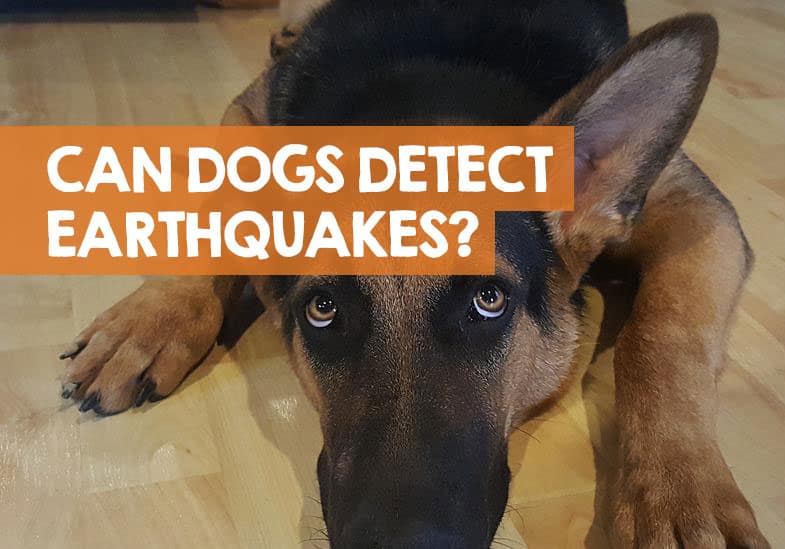 There’s a persistent rumor that dogs can dogs sense earthquakes before they happen and have some ability to detect seismic activity before an earthquake strikes. I wondered if there was any truth to these claims, so investigated the available scientific research. Here’s what I discovered.

Can dogs sense earthquakes? Research suggests that some dogs can detect earthquakes before they happen. Various studies and anecdotal reports show that some dogs will sense changes in seismic activity including atmospheric pressure, sounds, and vibrations.

Experts believe dogs get this special ability from their exceptional sense of hearing and smell. But dogs don’t need to feel the ground shaking slightly to know an earthquake is about to happen, unlike us, they could detect it way before it strikes.

Below I’ve put details of the research that explains the findings of the weird behaviors that dogs display when they suspect a quake is on its way. I’ve also included tips on what you can do as an owner if your dog is scared of earthquakes.

The research to show that dogs can sense earthquakes

A Japanese researcher, who worked as a public health doctor at the time, discovered surprising findings. Two months before this powerful quake hit, the number of dog-related complaints reported around the affected areas was abnormally high.

Then the earthquake occurred.

Some experts in Japan (led by the same researcher) believed this was no coincidence that dogs appeared to sense the earthquake before it happened.

However, their views were not able to 100% reliably state that dogs can sense an earthquake before it happens.

There has been more research though, most interestingly by Stanley Coren, PhD. He was researching Seasonal Affective Disorder in canines when, by happy coincidence he gathered data the day before a level 6.8 earthquake hit the Pacific Northwest. The AKC said:

“His data included activity and anxiety levels in 200 dogs living in Vancouver, Canada, a city that was affected by the quake. On the day before the earthquake, 49 percent of the dogs showed a significant increase in anxiety, and 47 percent were considerably more active. This was a sharp increase from the steady day-to-day averages collected to that point.”

Coren concluded that dogs can sense seismic activity, meaning they can almost predict an earthquake is coming… if only they could talk and tell us.

The Japanese research from 2011 points towards dogs being able to feel an earthquake coming. Dogs will often bark and exhibit weird behavior, and the suspicion is that they can detect changes in the atmosphere, gravity, subtle ground movements, vibrations, and odors from the ground.

Another possibility for why dogs can detect earthquakes before they happen is being able to sense P-waves, which humans cannot do.

P-wave are compressional seismic waves that shake the ground back and forth in the same direction and the opposite direction as the direction the wave is moving. But subtly.

Dogs also have an extraordinary hearing ability. Research shows their sense of hearing is four times greater than ours. They can easily detect high-frequency sounds, that is, sounds that are way beyond our hearing limits.

But that’s not all.

This impressive hearing ability also makes it possible for dogs to pinpoint where exactly the high-frequency sounds are coming from.

Before an earthquake strikes, The P-waves I mentioned earlier will travel through the layers of the earth underground. These waves occur in sequence:

Now, dogs can hear the first type of wave. The P-waves. That’s why our canine friends freak out way before the ground shakes.

They’ll know where these sound waves are coming from and what they signal (that a quake is on its way).

Plus, thanks to their exceptional sense of hearing, dogs can hear rocks rupturing below the surface and the sudden movement of groundwater (both incidents happen prior to an earthquake).

So, even before we feel the tremors, our canine companions can already sense what’s going on underground.

Dogs can also sense earthquakes through smell. The grinding of rocks underneath (before a quake strikes) causes the release of large amounts of radioactive gases nearer to the ground surface.

Humans can’t smell these gases. But dogs can, thanks to their extraordinary sense of smell.

In a nutshell, a dog’s ability to sense an approaching earthquake involves detecting the different situations underground occurring almost at the same time.

It’s this same strength of senses that help dogs to know when a storm is coming, albeit on a more sensitive scale.

Do dogs bark before an earthquake?

Dogs that can sense earthquakes and tsunamis will often bark before one strikes. In the 1989 San Francisco earthquake they were reports that dogs started to bark before it happened.

How do dogs react before an earthquake?

When a dog senses an earthquake is on its way, they will react weirdly, with not just barks.

How to keep your dog safe during an earthquake

If you’re a dog owner living in an earthquake-prone place, it’s important for you to know how to protect yourself and your dog when the rumbling ground movements start.

Earthquakes are terrifying. Not just to us, but to our dogs, which is a lot of the reason dogs will freak out when they sense an earthquake before it happens.

Here are some useful ideas to help you and your dog remain safe when this dreaded disaster strikes:

Here’s the thing about identification.

When earthquakes hit, many dogs go missing. If this happens to you (God forbid), your chances of reuniting with the canine love of your love will be higher if they have an ID.

If you’re inside the house, drop low and take cover in a sheltered place — like under a wide table. Take hold of your dog if they are within your reach and hide with them. If they insist on wanting to hide in another area inside the house, let them.

Forcing them to hide with you is asking for scratches and bite marks. Dogs have much better instincts than ours. So, if your canine companion wants to leave, it’s because they know of a spot where they will feel safest.

If the earthquake finds you and your canine friend outside, drop to the ground in an open area and hold on to their leash as tightly as you can.

Your dog will probably experience an aftershock after the quake stops. Be patient if they still don’t want to come out of their hiding place. Don’t force them. When they feel ready, they’ll run back to your loving arms.

Whether they are in hiding or come to you as soon as the quake ends, comfort them in soothing voices so they feel reassured that all is okay. Giving them a treat while at it also works.

Plus, keep your home environment calm for the next few days. You’ll avoid adding more stress to your dog, who may be trying to get over what just happened.

By calm, I mean putting plans to use your loud vacuum cleaner or blender on hold until your canine friend returns to their normal self.

How soon can dogs sense earthquakes?

Unfortunately, there isn’t reliable evidence showing how soon dogs can detect earthquakes. However, it is believed that 2 months before a Japanese earthquake struck, dogs were already starting to react.

Why do dogs act weird before an earthquake?

Dogs act weird because they associate earthquakes with horrible experiences. When they sense a quake is on its way, they know the horror that lies ahead.

How do dogs act when an earthquake is coming?

As discussed earlier, they bark, howl or pant more than usual, become abnormally clingy, exhibit inappropriate habits like biting their owners, and act super restless to the point of trying to escape from home.

Are dogs afraid of earthquakes?

Is there a list of animals that can predict earthquakes?

Whilst I don’t have a definitive list of animals that can predict earthquakes, I did find some interesting information on the USGS website. Here’s what the say:

“The earliest reference we have to unusual animal behavior prior to a significant earthquake is from Greece in 373 BC. Rats, weasels, snakes, and centipedes reportedly left their homes and headed for safety several days before a destructive earthquake. Anecdotal evidence abounds of animals, fish, birds, reptiles, and insects exhibiting strange behavior anywhere from weeks to seconds before an earthquake.”

In conclusion, there’s enough anecdotal and scientific research to show that some dogs can sense earthquakes before they happen. However, it’s not possible to say for certain, how dogs detect earthquakes and seismic activity… this is pure conjecture currently.