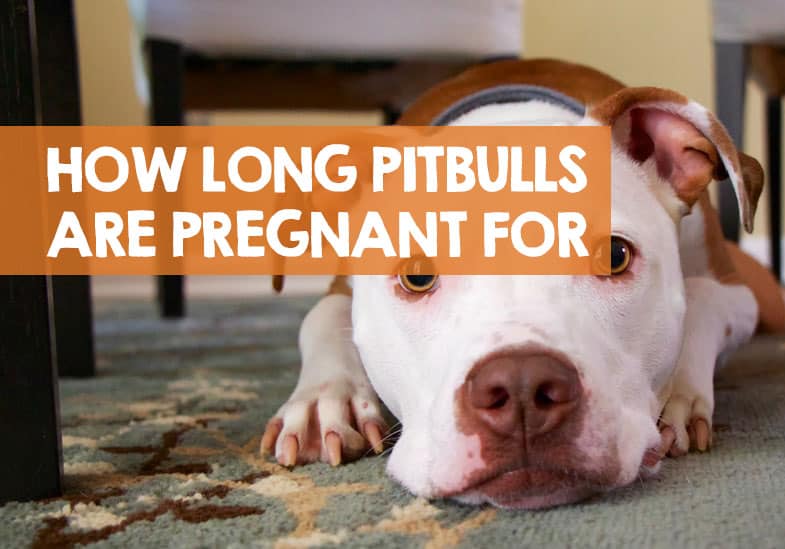 Pitbulls are a tenacious breed that were traditionally bred as catch dog. In more recent time they are being kept by people who just love them for their other characteristics. They have become one of the most popular domestic breeds in the country.

This means there’s big demand for Pitbull puppies, and many owners looking to breed them. One of the first questions those new to this will want to understand better is what a Pitbull pregnancy, week by week, is like. Here’s all you need to know, starting with how many days the Pitbull pregnancy will be.

How long is a Pitbull pregnant for? Pitbulls have the same gestation period as other dog breeds. Your Pitbull will be pregnant for 58 to 68 days, with the average pregnancy length usually being around day 63 from the point of conceiving to the delivery.

If you do have a pregnant Pitbull and don’t know to expect, please check out the following Pitbull pregnancy calendar. It’s a step by step guide through the days of your Pitbull’s pregnancy.

Once the female Pitbull has conceived (here’s how to tell), and the owner or breeder should continue as normal in regard to things like feeding and walks. There’s no need at this point to change her routine.

You might see a little sickness though related to motion sickness. There could also be a small pinky-colored discharge coming from the Pitbull, which is entirely normal and not a miscarriage.

At this point in your Pitbull’s pregnancy calendar, there’s so much more going on. The cells are developing, and the puppy embryos will transfer into the Pitbull’s uterus.

This is the time during the French Bulldog pregnancy calendar when the cells will start to grow, and the embryos move into the uterus area.

Just like the first 7 days of your Pitbull’s pregnancy, there’s no need to make any changes to her routine. You can keep her exercise and diet as it normally is.

Little Pitbull foetuses are now developing into shapes. They are very tiny still, possibly being about 1 centimetre long!

There is still no need to change your pregnant Pitbull’s diet and exercise routines yet at this point in the pregnancy calendar. However, you might find that she’s hungrier than usual and wants to take more calories on.

Things are now starting to take shape. Your vet may even be able to feel the puppies in your Pitbull’s belly with some soft, manual manipulation on the outsides of the stomach.

The tiny foetuses now look like little doggies. If scanned, it would be possible to see spinal and facial areas developing despite the fact the puppies are only 1.5 centimetres in length!

This is considered to be the most important times during the Pitbull pregnancy calendar as it’s when the developing puppies are most at risk from miscarriage.

It’s essential to start changing her routine now, making sure to limit any over-exertion and intense activities. Your vet might also recommend a change in diet, with possible nutritional supplements added.

Pregnancy signs to look out for include swelling of the nipples and clear discharge; neither are unusual or a reason to be concerned.

The Pitbull foetuses do really look like little puppies now with paws, claws, and whiskers starting to grow through. Scans could also reveal what genders the Pitbull puppies are too, as their genital areas can sometimes be seen.

Your pregnant Pitbull will start to put weight on and will demand more and more food to feed the growing pups. You will need to increase her calorie intake to help the foetuses develop healthily.

If you do pay for a scan, your vet will also be able to tell you how many puppies your Pitbull is expecting. On average, Pitbulls will have litters of 6 puppies.

Handy Hint: By week 5 in the Pitbull pregnancy calendar you might be able to start feeling the puppies yourself. Here’s how you can do it.

At this point during your Pitbull’s pregnancy she will be starting to show, and it will be obvious that she’s expecting! In fact, many breeders report that the female Pitbull visibly gets bigger with each day that passes in the pregnancy calendar.

Other things to look out for include the color of the nipples getting darker. Inside the womb there will also be changes afoot, as the Pitbull puppies start to develop their own unique markings and patterns.

Her nipples will also become darker, and there will also be color changes to the growing puppies too as they start to develop their unique markings.

As for mum, she will be getting hungrier as each day of the pregnancy passes. Some breeders will start to add puppy food into her diet, and nutritional supplements if not already.

I also recommend you help your Pitbull start with her nesting. This is where she finds a warm, quiet, safe, and comfortable place to give birth. It’s something that you can help her prepare for, so she is as calm as possible.

Your Pitbull will now have been pregnant for 42 days and could be experiencing hair loss. This is entirely natural, as is fur coming away from her belly in order to prepare for birth and feeding puppies.

You will also need to increase the mother’s food intake again as the puppies are now almost developed into the classic Pitbull shape known the world over.

Calcium is very important in her diet now, as it will help to strengthen and develop the growing Pitbull puppies before birth.

Some Pitbulls will give birth prematurely, despite the length of pregnancy typically being around 63 days – so this week is critical as it’s when it could happen. Be prepared just in case you get an early surprise.

The best thing you can do for your Pitbull is to keep them relaxed and calm, with almost zero physical activity. If she does over-exert herself and starts running around with the zoomies, she could give birth earlier than expected.

She will be showing nesting behavior, and you could even see signs of the puppies moving around under the surface of her belly. They will be more active than usual during this 8th week.

Now is the time most Pitbulls will give birth. A sign she is ready will be a slowing down, quietness, and a loss of appetite.

And then the Pitbull puppies will arrive!

And that’s that… and there’s going to be so much more for you to now do to help the mother. I will save that all for another blog post though; but here are some related questions.

How many puppies do Pitbulls have?

Pitbulls have 5 puppies on average, here’s what Wikipedia also says:

“The average size of a Pitbull litter is 5 puppies. When mother Pitbulls give birth to litters of puppies, the little pups weigh just a few ounces each.”

Here are some common dog breeds, and how many puppies they have on average compared to Pitbulls.

Pitbulls are notoriously popular which accounts for how expensive they can be. If you are thinking about breeding your own Pitbull, please do reconsider if it’s a pure money-making exercise.

Many owners will breed and breed their Pitbulls which can take a terrible toll on their bodies and mental health.

Whilst you might think that the length of time a Pitbull is pregnant for makes this look like a great way to make some regular cash on the side, do think again.

If you are on the other side of the fence and want to buy a Pitbull puppy, please do your research and make sure you are buying from a reputable breeder.

If you enjoyed this guide to how many days a Pitbull will be pregnant for, you might also like these related Pitbull guides: