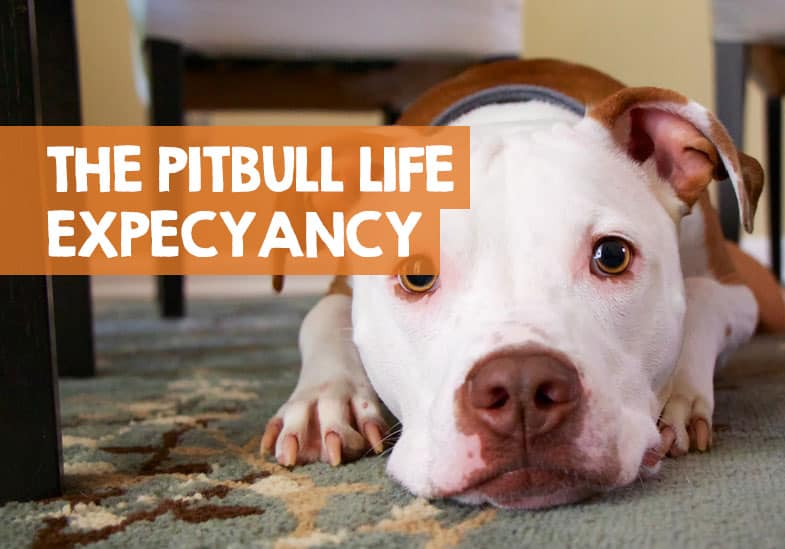 Pitbull Terriers have two reputations – they are either known as lovers or fighters. To a large extent, how they are treated by their owners, determines their average lifespan. If you have just bought a puppy or are thinking about getting this breed, you will want to know how long Pitbulls live for.

To help you I’ve laid out how long you can expect the Pitbull lifespan to be, including red nose and blue nose Pitbulls… and some tips on how you can help to extend the average lifespan of a Pitbull.

Here’s the short and generic answer first, followed by a more in-depth explanation on how long Pitbulls can live depending on various different factors.

How long do Pitbulls live for? The average lifespan of a Pitbull is around 13 years of age. Estimates of on how long Pitbulls can live for ranges from 8 to 15 years, to a tighter estimate of 12 to 14 years. It will depend on multiple factors including their health, heritage, and mix of breed.

Smaller dogs, in general, have a longer lifespan than large dogs. As they range in size from medium to massive it has a bearing on how long Pitbulls can be expected to live for.

Like Jack Russell Terriers, Pitbull Terriers are not a recognised breed of dog but rather a type. Pitbull is the umbrella term for a range of dogs resulting from cross breeding bulldogs and terriers.

Some well-known types of offspring and their weight ranges are:

Pitbulls are strong athletic dogs, bred for their ‘gameness’ – a combination of a fighting spirit and courage. They have large heads, strong necks and powerful jaws. They tend to have muscular front legs and low-slung hind quarters.

They are active dogs, and this in part can help inform how long your Pitbull lives for. If you keep your dog fit and active, with a healthy diet, there’s every chance that your Pitbull’s lifespan will be longer than the average.

Handy Hint: To help keep your Pitbull healthy, there are many foods which you should avoid giving them, some could even poison your dog!

Pitbulls have high levels of energy and need a structured regimen of vigorous exercise in order to channel that energy. Undisciplined dogs could easily find themselves getting into mischief and a great deal of trouble.

Dogs that don’t eat the right diet and have less exercise will naturally have a lower Pitbull life expectancy.

Then there are those owners that yearns back to the days of yore, and will go as far as cosmetically altering their dogs’ ears in order to make them appear vicious. Others have even taken it further and trained their animals for their initial intention of dogfighting, which is illegal in most countries.

Both lifestyles have an impact on the average lifespan of the Pitbull dog.

How genetics affects how long a Pitbull lives for

Unfortunately, due to their breeding, Pitbull terriers have developed a predisposition towards a number of debilitating and life-threatening conditions. These include:

These are potential illnesses that can affect any Pitbull at any stage in their life. Keep regular health checks arranged with your vet, and your Pitbull can live longer.

Other causes of ill health that affect life expectancy

Insufficient exercise can do the Pitbull a disservice in two ways. It can lose muscle tone, become overweight or even obese. This condition is exacerbated by a poor basic diet and too many treats.

Another outcome would be destructive behaviour resulting from a bored and frustrated dog. This is an undesirable character trait in a dog and could lead to inappropriate discipline and further behavioural problems.

Pitbulls are strong dogs and can be an uncontrollable nuisance if they are ill-disciplined. This results in many of them being abandoned or surrendered and placed in shelters.

Bad breeding can also cause health and behaviour problems when the dog gets older. A puppy should stay with its mother and siblings for at least 8 to 9 weeks. Socialisation at this stage teaches a puppy its place in the hierarchy, and how to treat others appropriately.

How to help your Pitbull live longer

Do your homework when buying a Pitbull puppy. Get to know the breeders and their philosophy. If they are interested only in making money, and want to separate the mother and litter as early as possible, you would be advised to look elsewhere.

Ask to see the parents of the puppy and enquire about their health. If they have any signs of the predisposed ailments, chances are high that they will have passed them onto their offspring.

By missing this check, there’s every chance you will get a Pitbull that won’t live as long as the average life expectancy is slated at.

Even healthy, well-bred pups can succumb to viruses against which they have no natural immunity. It is essential to get the pup vaccinated against these diseases, and to strictly follow the guidelines for booster shots.

Also keep your pup away from areas where other dogs have congregated, at least until it has had all its shots. The parvovirus pathogens, for instance, can remain viable in infected soil for up to a year.

Throughout the dog’s life have regular vaccinations and check-ups at the vet, paying particular attention to the possible hereditary conditions outlined above.

Keep worms and other parasites, such as ticks and fleas from irritating your Pitbull, causing them to lose condition and making them candidates for more serious health problems. Regular grooming will help you to identify any allergies, mites or other skin problems. It also helps you to bond with your dog.

A problem that is often overlooked by many Pitbull owners is dental hygiene. Much like humans, if plaque is allowed to build up on the gums, this gives germs a foothold. It could cause tooth decay, and even more sinisterly, sepsis, which could spread to other organs of the body.

From an early age, discipline your Pitbull so that it can be an asset to your family environment and a pleasure to any visiting friends or family members. These dogs have the strength and intelligence to become delinquents if not kept in check by a firm but loving hand.

An adjunct to this, would be regular exercise to prevent the behavioural problems that could lead to their downfall and a shorter than average lifespan. They are the kind of dog that seems to have endless energy, and gets fitter with exercise, so calculate the commitment needed to keep them out of trouble before acquiring one.

Pitbulls need a diet that will meet their high energy needs without causing them to put on excess weight. Treats, which help family members bond with a dog, need to be factored into their overall diet. Stock up with healthy, low carbohydrate treats. If you can convince them to enjoy cucumbers and cauliflower, that would be ideal.

As far as possible, create a calm environment which does not stress your dog. Teach them to socialise effectively with other dogs, animals and any people they may come into contact with.

Their looks can often get them into trouble with nervous people and aggressive animals. Be proactive in dealing with these incidents and help your dog to keep his cool.

Pitbulls have an unfortunate reputation for biting, and are on the banned list of many countries, where they cannot be imported, bred or sold. They are the type of dog most likely to end up in a dog shelter. Once there, it takes a longer period than most dogs to rehome them.

Pitbull owners bear a huge responsibility in keeping their chosen dog happy, healthy and out of trouble for the full length of its natural life.

Get this right and you will be richly rewarded with a loving and faithful canine companion. Then there’s every chance that your Pitbull could live longer than you would expect given the average lifespans of this dog type.

But what about the different types of Pitbull, and how long they live for? Well, let’s get a bit more specific below.

The red nose Pitbull is a medium sized dog, being a variety of the American Pitbull Terrier. In terms of lifespan, you can expect a red nose Pitbull to live to 14 years old on average. Some have been known to live as long as 16 years old.

How long do Pitbull mixes live?

This is an incredibly hard question to answer, as it will depend on what dog the Pitbull has been mixed with, and what genetic predispositions that might lead to.

The best answer I can give is that the life expectancy of a Pitbull mix breed could be from 12 to 14 years old.

What do Pitbulls usually die from?

According to the Handicapped Pets blog, Pitbull can be prone to a common range of major health issues which are listed below. However, in terms of the one that Pitbulls usually die from, it’s not uncommon to consider heart disease.

What is considered old for a Pitbull?

Given what we know about the average lifespans of Pitbull and how long they live for, I would say that 15 years and older would be considered old for Pitbull.

At this age, they have outlived most other Pitbulls and will have calmed down from the excesses of their youth and middles age…. If you were wondering, this is when Pitbulls calm down usually.

The Pitbull name is derived from the original purpose of their breeding. They were initially bred in the 16th century for dogfighting in a pit and for bull baiting in a ring. They were also found to be reliable in battle for attacking horses and the enemy’s dogs.

They became popular as the quintessential butcher’s dog, looking the part of a fierce carnivore.

Underneath all that brawn, they are intelligent and obedient, making them easy to train. They are extremely faithful dogs, and loyal to a fault. They will not hesitate to defend their owners.

And its this loyalty that makes them such a popular pet… which makes it even more heart-breaking when they eventually succumb to the end of the average Pitbull life expectancy.

However, with regular exercise, good diet, and vet checks once a year, there’s no reason why your Pitbull should not live longer than the average lifespan.