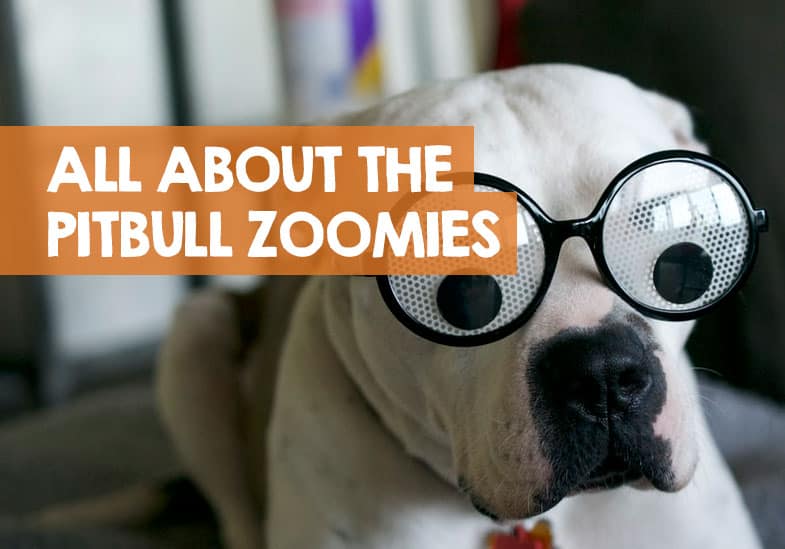 One of the best things about being a Pitbull owner is the utter unpredictability of life with your furry partner in crime. One moment your dog is completely calm and relaxed, and the next, he is running in circles all around your living room doing the zoomies.

Your Pitbull terrier might get the zoomies after a bath, towards the end of the day, at night, when playing outdoors, after they have done a poop, or perhaps for no obvious reason at all.

It’s almost as if an invisible switch has been flicked, and your Pitbull is suddenly running back and forth and around in circles all over the place. These occasional absurd bursts of energy are often referred to as the zoomies… and for good reason too.

Pitbulls run around in circles like crazy with the frenetic random activity periods (FRAPs) frequently. Also known as the zoomies, they are frantic, repetitive behavioral episodes caused by excess buildup of energy.

Handy Hint: Running around like crazy can get less as the Pitbull grows older. Here’s when you can expect most Pitbulls to start calming down.

The zoomies or FRAPS most commonly occur in Pitbull puppies and younger dogs, but it can also happen in Pitbulls of all ages.

High-energy, active dogs such as Pitbull Terriers may have more zoomies than less active breeds. Senior dogs that still get the zoomies will likely live very long lives—zoomies are actually sign of very good health and nothing to be overly concerned about… providing your dog isn’t hurting themself.

Pitbull zoomies can be triggered at certain times of the day or after a specific activity. Anecdotally, many Pitbulls get zoomies after they’ve had to stay still for a bath or after spending many hours in a crate.

Pitbull zoomies can also be triggered by stressful situations like a vet visit, too. Sometimes a dog meeting another dog can trigger a bout of excess energy release.

Pitbulls who get the zoomies usually seem like they’re having the time of their lives. It’s completely natural, normal, happy dog behavior that shouldn’t be a cause of alarm.

Just give your Pitbull the room to run around without running into furniture or other dangerous objects.

However, suppose you notice that your Pitbull has been getting the zoomies much more often than he used to. In that case, it’s a good idea to keep a closer eye on him and determine precisely what he’s reacting to.

Frequent zoomies can be a sign that your Pitbull is not getting enough exercise. This can be resolved by going on longer or more frequent walks.

When Pitbull zoomies happen most

Owners can often tell when their Pitbull is just about to get the zoomies. He or she will get a glint in their eyes, they might assume the play-bow position, and they start jumping around in small bursts before full-on running around in big circles or running up and down corridors in your home like crazy.

Pitbull zoomies hit at seemingly any point of the day, and for one reason or another. There are a few occasions where they you are more likely toyou’re your Pitbull get the zoomies though.

My Pitbull zoomies after a bath

Your Pitbull gets the bath time zoomies happen due of the pent-up adrenaline from having to sit still for so long, or because running around will dry their fur faster.

My Pitbull zoomies before bed or late at night

Some Pitbull puppies get the zoomies right before bedtime as a final energy release before settling in for the night.

Other reasons why Pitbulls get the zoomies

Some Pitbulls get the zoomies right after an extended training session, once they’re free to take out their built-up nervous energy. Sometimes even a good poop can send a Pitbull into running like crazy in ever more excited circles.

Some Pitbulls get so excited that their zoomies include nipping or biting behavior. If this happens, redirect his energy by engaging him in a game of tug of war, fetch, or by presenting his favorite toy.

How do you calm a Pitbull with the zoomies?

When your Pitbull runs around like crazy, expect the zoomies to normally last around five minutes or less. If so, there’s nothing to worry about as long as your Pitbull is zooming in a safe place.

Avoid letting your Pitbull zoom on slick surfaces or your hardwood floors.

Don’t ever chase after a Pitbull with the zoomies. A chase will likely be misinterpreted as an attempt to play and will only excite him further. If you need to catch your zooming dog, go the opposite way and try to make him chase you. Encourage him to follow you into a safer area, and give him a toy or a treat when he does. Teaching your dog and regularly practicing the “come” command can help get your Pitbull to follow you.

If your Pitbull is zooming a bit more wildly than can be contained, you can try to redirect their energy by throwing them a toy. If your dog has good recall, he will come to you once the worst of the zooms calm down.

Handy Hint: Pitbull Terriers are one of those breeds that do have a reputation for getting clingy. Here’s why Pitbulls get clingy and what you can do about it.

As long as their environment is safe, it’s alright to just let your Pitbull’s zoomies run their course. Zoomies won’t give your dog seizures or cause emotional or physical problems.

However, if your Pitbull has a long history of being very low-key and calm, and he suddenly starts to run around like crazy in wide circles every day, a trip to the vet may be necessary.

When it comes to zoomies, prevention is the best medicine. You may be able to reduce the frequency of your Pitbull’s zoomies by challenging your dog physically.

If your Pitbull gets the bath time zoomies, perhaps a vigorous game of tug of war or a long walk before his bath will lead to a nap instead?

Your dog may need more mental stimulation, too. Bored Pitbulls are more prone to the zoomies. A short training session every day will develop good habits and be great exercise for your dog’s mind.

Whilst there is no absolute scientific evidence to explain why Pitbulls get the zoomies and run around like crazy, we can make assumptions as described above.

The zoomies are unlikely to harm your Pitbull, but if you do want to reduce them, make sure your dog gets plenty of exercise and mental stimulation.