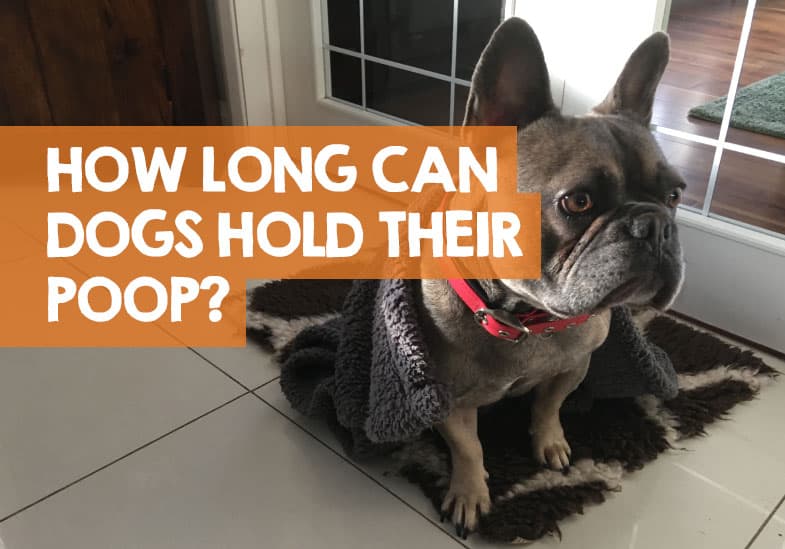 We’re lucky enough to have a dog flap, meaning our dog can go out back when he needs to poop or pee. But recently I had to lock the dog flap up due to some fencing work on our property and go out for a few hours.

It made me wonder how long a dog can hold its poop after eating. My dog likes to do his business pretty soon after a meal, or at least, it seems that way.

To find out whether we’d have a nasty surprise when we got home, I did some research into how long a dog can hold his pee and poop. Plus, whether holding it in would make your dog sick – here’s what I discovered.

How long can a dog hold its poop? Most healthy adult dogs can hold their poop and pee for 8 hours if they absolutely have to. Experts believe puppies can hold their poop for one hour for every month in age they are. This limit appears to level out ay 8 months of age, meaning 8 hours holding of poop at a maximum.

However, there are so many variables involved.

For example, is your dog older, have health problems, what was in their diet? All these factors can make a big difference in how long dogs hold their poop in for.

How long can a dog hold its poop after eating?

What will happen to your dog’s toilet break if you find yourself stuck at work? Or perhaps you had to leave the home urgently for a few hours? It could be that you are suddenly rushed off your feet, caught in a traffic jam, or are otherwise unable to get home on time for your pup’s scheduled walk?

Likewise, what do you do when you are dealing with a new puppy who isn’t house-trained yet? Or similarly, an older dog who is unable to hold its bowels for longer than an hour or two?

You need to be aware of how long your dog can hold its poop for, as this can help you deal more efficiently with situations like these.

Knowing this can also help you to plan accordingly so that your dog is not left alone for too long. Hopefully, this will then reduce any chance of coming home to an unwelcome surprise on your living room carpet.

How long can an adult dog hold its poop?

Most healthy adult dogs can hold their poop for around 8 hours after eating. However, whether they hold it for this long when pushed to the limit is debatable.

If your dogs are forced to hold their poop for too long, they will start to become uncomfortable and will want to relieve themselves as soon as they can.

Thus, most dogs will not wait for this length of time and would rather save themselves this discomfort by relieving themselves sooner than later. This can even happen with dogs that have been house-trained, which can be surprising for many owners.

So, if something like this does transpire and you are put in a situation where you cannot get home on time, be aware of how long you have been gone.

If your dog has had an accident, try to refrain from getting angry and remain patient. Instead, use comforting words to reassure them and then take them out for a walk as soon as possible.

After all, most of you will be aware of how it feels to need the toilet desperately. It can be stressful when you cannot find a place to relieve yourself, and the same is true for your dog when they need to poop or pee.

Puppies should only be left for a maximum of 1 to 2 hours, as they can develop problems in their behavior if they are left for too long.

Several other factors can affect how long your dog can hold its poop after eating.

For example, you might own a dog who is starting to get long in the tooth or a dog who is recovering from health problems.

How long can an older or sick dog hold its poop and pee?

if you are the owner of an elderly dog, you will probably be aware that they cannot hold their poop or pee for long periods of time.

When compared to younger dogs, older dogs have to poop more frequently, and some dogs will have to relieve themselves after every meal.

Handy Hint: Here are some tips on how you can stop your dog from peeing around the house and on your furniture.

In most cases, elderly dogs are very similar to puppies, and they should be taken out to do their business quite often. This will then resolve any problems of them pooping in the house.

Likewise, if you are the owner of a dog that is currently sick or recovering from an operation, they will probably be unable to go very long without needing to empty their bowels.

You should talk to your vet if this is the case and monitor your dog for any signs of abnormalities in its stools.

How long can a puppy hold its poop and pee?

Interestingly, as each month passes the puppy’s ability to hold its poop lines up exactly with their age (i.e. 3 months x 3 hours, and so forth).

This continues to develop until the pups are around 8 months old, where in theory, they will have progressed to being able to hold their poop for the same amount of time as an adult dog.

Of course, this is not always a set rule.

All puppies are unpredictable, and unless they are house-trained, will likely poop whenever and wherever they feel like it.

A lot of this depends on their personalities, and it can take a lot of trial and error before they can be relied upon not to poop in the house.

If you do own a puppy, you should always be on the lookout for signs that they are about to do their business.

These can be shown in various ways, such as sniffing around, barking, circling in the same place, scratching at the door, and other restless behavior.

Handy Hint: Here’s how long after eating you can usually expect a dog to digest his food and then poop it out.

Can a dog get sick from holding in poop?

In theory, yes, a dog could get sick from holding in their poop. When poop is held in it can reabsorb into the body. It can lead to fecal bacteria overload and cause abdominal pain.

However, it’s unlikely that a dog would have the control and desire to hold his poop in that long that it would make him sick… unless they have a medical problem relating to constipation or similar.

What if my dog hasn’t pooped in 24 hours?

Healthy dogs can poop as much as 5 times a day, so to not poop at all in 24 hours is very unusual. If you notice your dog hasn’t pooped in a day, it could mean they are constipated.

You should call your vet if it goes on longer than 24 hours.

How many times should a dog poop a day?

How frequently a dog poops in one day can often change due to several factors. Normally, the average dog will usually need to go between 1 to 5 times a day.

Puppies, on the other hand, will have to go more frequently, as will older dogs (as stated earlier in the article).

However, some dogs can suffer from constipation from time to time. If this does happen, they may not poop for up to 24 hours, or more.

Handy Hint: Many vets say it’s okay to let your dog have constipation remedies that are actually designed for humans!

To help them pass their poop quicker you can add fiber to their meals, with canned pumpkin, olive oil, and spinach being some of the most popular foodstuffs that contain high amounts of fiber.

Nonetheless, if there are no improvements in your dog’s constipation after having added fiber to their diet, I suggest taking them to a veterinary clinic, especially if they have not had a bowel movement for 2 days.

Here they will be able to properly diagnose what is causing the issue, and, hopefully, offer you some advice on how to deal with the problem.

Dogs can also have issues with pooping too often. Diarrhea is often the main culprit, which causes them to pass soft and watery stools several times a day, if not more. Diarrhea in a healthy dog can be triggered by several different things, but it is mainly caused by eating rubbish or rotten foods while outside.

Sudden changes in their diet, stress, and the development of bacterial or parasitic infections can also have a negative effect.

Diarrhea normally lasts for a short period, often only affecting a dog for a few hours or a day at most.

However, some dogs can develop chronic diarrhea, which can last significantly longer. If you notice your dog has diarrhea then you should make sure that they are drinking plenty of water.

Failure to do this can lead to your dog becoming severely dehydrated, which can be extremely dangerous for their health. Likewise, you should take your dog to the vet if you notice any blood in its diarrhea, as this can sometimes be the sign of a more serious underlying condition.

Let’s face it, if you are like me, this question isn’t something you find yourself wondering about very often. However, knowing the answer can prove surprisingly useful for several different reasons. (Especially for those of us who do not own a garden or yard).

But there will be a time when knowing how long a dog can hold its poop will be very useful, so I hope I’ve helped.

The bottom line is (no pun intended) there is no guarantee how long your own dog will hold its pee and poop… so don’t take this guide as 100% fact!