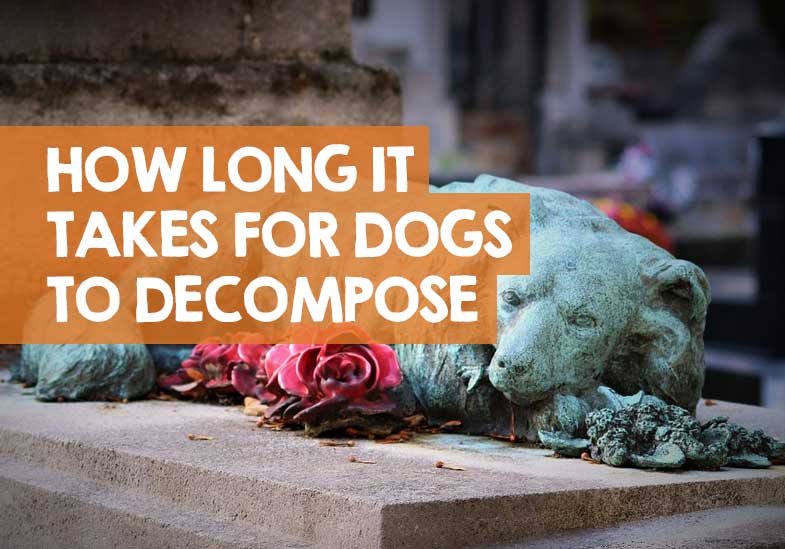 There are many reasons why you might want to know about dead dog decomposition times. It could be that you have a dead dog on your land that you don’t want to disturb. It might be that your pet has passed away, and you want to bury them on your property.

Whatever the reason, I’ve put together a handy guide which explains how long dogs will take to decompose when buried in the ground in dirt, or when left above ground. I’ve also included some tips on how you should bury them to stop scavengers further down the page.

How long does it take for a dog to decompose? When buried deep in the ground, a dog might take 6 months to 18 years to fully decompose. If left above ground, decomposition will be much quicker. Dead dog decomposition speed includes how deep, whether the body is wrapped, and the climate.

How long does it take for a dog to decompose when buried?

There are so many factors that come into play when calculating how long it takes for a dog’s body to decompose, including:

But let’s just play out a couple of different scenarios in what you might describe as being average weather conditions.

How long does it take for a dog to decompose underground?

In standard climates, a dog that is buried in the ground with nothing wrapped around it and in no coffin, might take 6 months to a year to decompose.

If that dog is buried deeper in the ground, and in a plastic coffin for example, it might take as long as 18 years for the body to completely decompose to bones in the soil.

How long does it take for a dog to decompose above ground?

Handy Hint: Flies will often bite at dog’s ears. Here’s how to make your dog’s life easier and stop the biting.

Providing it’s not a hot or very cold climate, you could expect it to take as long as one month for the dog’s body to decompose when left above ground.

The 5 stages of decomposition in a dog

If the dog has been left to decompose above the ground, you would witness the 5 stages of decomposition, as taken from Wikipedia.

Here is some advice I thought you might also want to look into if you are seriously considering burying your own dog.

How long can you wait to bury a dog?

A vet I spoke to said that you should not wait too long to bury your dog, as it can start to smell and attract flies inside of 24 hours.

However, you also want to wait long enough just to make sure that the dog is in fact dead. You can tell the dog is dead once rigor mortis starts to set in 2 to 6 hours after death.

Did You Know? It’s a commonly held belief that all dogs die with their eyes open. But just how true is this, or is it a myth?

How long does it take for a dead dog to smell?

As we’ve already established, dead dog decomposition can depend on the environment. This means that if you’re in a warmer part of the country, a dead dog’s body might start smelling in as little as 10 to 12 hours after death.

However, if the dead dog in a cold environment such as Alaska, and is outside in the snow, you probably won’t get any bad smells at all at just above freezing temperatures.

On average though, you might expect a dead dog to take as long as a day to start smelling.

How deep should you bury a dog?

In order to let a dog’s body decompose properly when buried, and to reduce the chance of it being disturbed by scavengers, you should dig 2 feet down. In lighter soil which has a sandy consistency, you will need to dig deeper, to 3 feet… for best results though, here’s how deep I recommend you go with any dog grave.

These depths should also mean you don’t hit any utility lines or pipes near your home.

Make sure you also fill the last 6 inches of the burial spot with stone, then cover dirt over that, and then place rocks or slabs over the spot.

This will help to protect the dog’s grave from being disturbed and dug up by other animals.

Where is the best place to bury a dog?

It’s important to choose the best place in your garden or yard to bury your dog that won’t be disturbed in the future. That means burying the dog in the ground as far away from any flowerbed, water sources, and pipes.

What animal would dig up a dead dog?

You don’t want to see your beloved pet being dug up. This is why it’s so key to bury the dog as deep as you can, because there are some scavengers out there who will try and dig the corpse up.

Common animals that would dig up a dead dog include any scavenging animal. The most likely would be foxes, wolves, vultures, bears, and badgers, depending on where you live.

In the UK, it’s illegal to bury a dog anywhere other than on your own property or with a registered pet cemetery. If you do decide to bury your dog in your garden, you must own the property, and not be renting it.

UK legislation from 2013 also states you should bury the dog 2 feet deep in heavy soil, or 3 feet deep if it’s in lighter soil. You are also not permitted to bury the dog near any water sources, or at all, if the animal is said to be a danger to human health.

As you can see, there is no real cut and dry answer for how long it takes for a dog to decompose when buried, or just left above ground. There are so many factors involved.

If your dog has passed away, I would recommend you seek to have them buried in a proper grave at a pet cemetery where things like decomposition rates won’t be an issue for you.