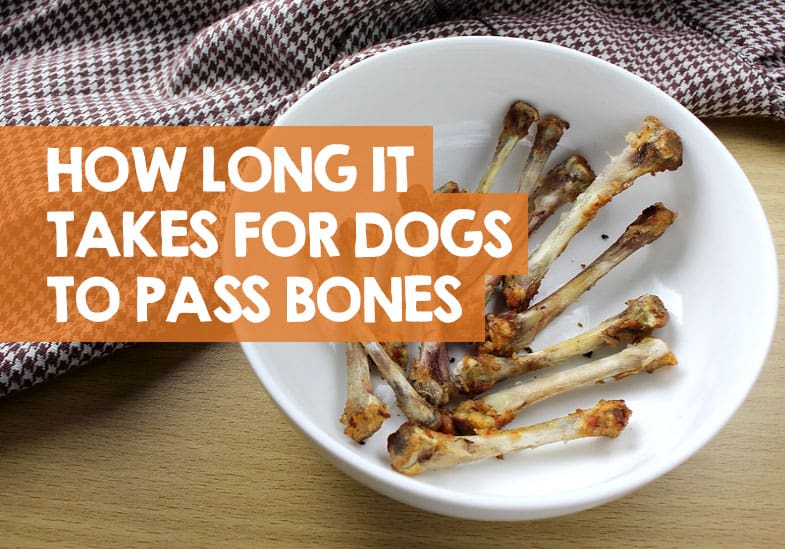 While many owners will happily let their dog chew on a large, raw bone, if swallowed when cooked or raw, bones can cause problems. When bones are cooked, they become brittle and sharp and so could cause damage to our dogs as they’re swallowed and pass through their digestive system. Even raw bones can cause blockages when swallowed.

Now there’s a good chance that your dog will pass the bone without problems. If it is going to get passed though, how long should it take? Here’s what a vet told me…

How long does it take for a dog to pass a bone? Sometimes a bone will pass through a dog in 8 to 12 hours. However, there is no guarantee or set time within which it can happen due to the various factors in play, including size of bone, cooked, raw, size of dog, and more.

Important: If your dog has swallowed a bone, call a vet immediately for professional advice. Whilst it might pass through and get digested, you are best to check in case of any risk.

I personally went through this exact same thing a couple of months ago. I was walking Claude near our local shops and he grabbed a chicken bone off the pavement before I had a chance to stop him.

I went to grab it from his mouth, and he gulped it down immediately. I freaked out as most dog owners would and called the vet.

The vet told me that the chicken bone should digest and pass through his system after I described the size of it. They said I should call back if I see any symptoms of a blockage in a dog… but he was absolutely fine.

The cooked chicken bone passed through my dog’s system with no problems, and in fact, I didn’t even see anything come out the other end.

It might not always be the case though, so read on for more advice on how long it takes for a dog to pass a bone, and whether their stomach acid can dissolve it.

Can a dog’s stomach digest a bone?

Ask any vet what they’ve removed from a dog’s stomach and they’re likely to come up with a whole list of weird and wonderful items. From pantyhose to children toys, jewelry to coins, it seems as if our dogs will swallow just about anything!

The good news though is that a dog’s stomach acid can digest or dissolve a bone in many cases. Small bones are usually dissolved by acid in the stomach and pass without problem.

However, there is still a risk that cooked chicken bones can splinter when chewed and then cause perforations in the intestine. Now while it’s unusual for this to happen, it is possible.

Hopefully in most cases, how long it takes a dog to pass a chicken bone will be 8 to 12 hours as with most small bone types… but you should still seek immediate vet advice in case of blockage.

Make sure those chicken bones are bagged up and then kept safely away from your dog until they go out in the trash.

Handy Hint: I’ve previously written a guide on how long it takes for various foreign objects to pass through a dog’s digestive system.

What should I do if my dog swallowed a bone?

First things first, is your dog choking or struggling to breath?

If yes check to see if you can see the bone and whether you can safely remove it to clear their airway. If you can’t remove it, don’t delay trying to get it clear and instead head straight to the vets.

Do let them know that you’re on your way so that they can have a vet ready to see your dog as soon as you arrive.

Now hopefully and more often than not, your dog is sitting and looking very happy with themselves having enjoyed that tasty treat. So, assuming that they are behaving normally, then the likelihood is, that the bone is making its way down to their stomach. There are now three different outcomes:

Should you call the vet if a dog swallows chicken bones?

Your vet is the best person to make a call on what if anything needs to happen next. So, it makes sense to give their office a quick call to let them know what’s happened and to ask for their advice.

Now the chances are that they will suggest that you wait and see what happens next but also ask that if you see any of the following symptoms to get back in touch with them straight away.

All of these symptoms combined with the eating of the bones are likely to indicate that there is a blockage which is a potentially life-threatening situation for your dog to find themselves in.

Is surgery ever needed if a dog cannot pass a bone?

If the vet has asked to see your dog then the first thing they are likely to do, is to see if they can see the bone by taking a look in your dog’s mouth. If they can’t then the next step is to take an x-ray so that they can see what’s happening inside of your dog.

Once they can see where the bone is, they can decide on the next stage of action. If the bone has made its way from the stomach to the large intestine, then it’ll be passed in your dog’s poop and no further treatment is needed.

That’s because by the time the bone has reached the large intestine, most of the bone will have been digested and absorbed.

By the time your dog passes the bone it will be alongside feces which are around 60 to 70% water all of which helps everything to pass with ease.

If it’s decided that the bone needs to be removed, then that’s usually done with an endoscopy which is a flexible tube with a camera and that’s inserted via your dog’s mouth.

Now that the vet can see more clearly what’s happening, they will be able to either remove the bone back through the dog’s mouth or push it into their stomach where it can then pass through the digestive system as normal.

Surgery is the last option and is usually only considered if the vet believes that it would dangerous to use an endoscopy or if the bone has caused a perforation.

When this is the case then your dog will also require hospitalization where they will be given fluids until they are able to once again eat and drink on their own. It’s likely that they will also be prescribed antibiotics and electrolytes supplementation to help the recovery process.

Now whether the chicken bones were cooked or not makes a big difference as to how you need to respond to the situation. If it was raw bones that they ate, then there is probably no need for stress or worries about vet visits.

In fact, many dogs eat raw chicken bones as part of the daily diet when they are fed on what’s called Biologically Appropriation Raw Food or BARF diet.

Dogs have a digestive system which allows them to pass bones as part of their diet. For example, your dog’s stomach acid can dissolve bones.

However, if this is a very new type of food or if they have eaten large amounts of raw chicken bones, they may become a little constipated due to the high levels of calcium that they’ve consumed.

Then, it can be helpful to also feed them a meal so that the percentage of bone the stomach is trying to process is reduced.

You may be wondering about the risks of salmonella which is associated with raw and undercooked chicken. Well, the good news is that this is very rare, and this is due to their due to the strong stomach acid within their gastrointestinal tract which neutralizes the bacteria.

But, if your dog has other illness or been through a stressful period, then their chances of becoming infected can increase.

Symptoms of salmonella in dogs are much the same as you would expect to see in people and that includes stomach cramps, a high temperature, sickness and diarrhea.

The notes in this content is based on my own personal experience and research. Even if my dog was to swallow a bone today, I would still call the vet, rather than wait for the bone to pass and digest through his system – always play it safe!