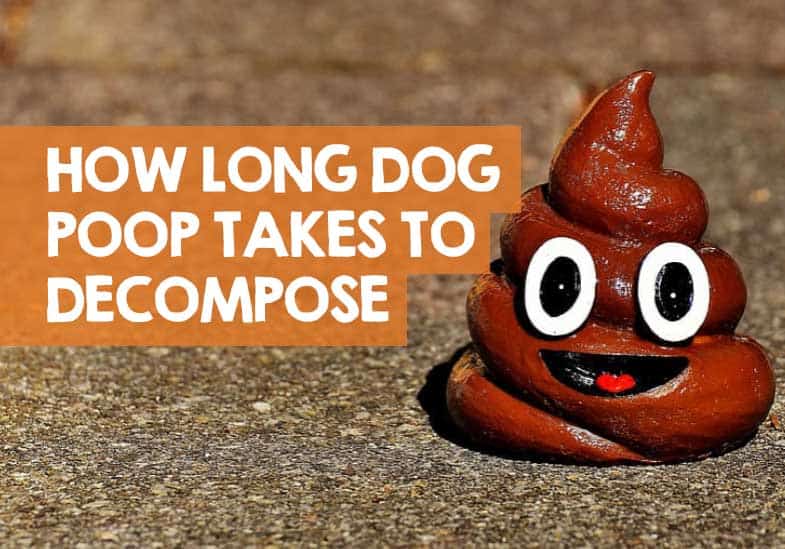 My dog has the run of our property and will often do his poop in outdoor space. I’ve often wondered what would happen if I just left it. For example, would the rain dissolve it, or would it decompose, break down, and biodegrade by itself quite quickly.

I decided to look into it, so if you’ve been thinking the same about dog poop decomposition, here’s a short answer first followed by more detail.

How long does dog poop take to decompose? Dog poop can decompose in as little as 9 weeks depending on environmental factors and the dog’s diet. In colder climates, it can take up to 12 months for dog poop to decompose and break down in cold weather, particularly if it’s been buried in the woods during winter.

For more detail on this fascinating subject, continue reading!

How long does dog poop take to decompose / break down / biodegrade?

Whether your dog’s poop decomposes and breaks down slowly or rapidly biodegrades depends on several different factors, including your dog’s diet and what kind of climate you live in.

For example, in colder areas dog poop can take much longer to decompose and break down – sometimes up to a year! This is due to the cold weather preserving the waste. Whilst in warmer weather it will likely decompose much quicker due to it being unable to freeze.

Another thing that can affect how long it takes dog poop to decompose and biodegrade is the dog’s diet. Dogs that eat a diet that is high in protein, such as meats, will inevitably do poops that are harsher on the environment.

Whereas dogs that eat mostly plant or grain-based foods will do poops that are kinder to the environment. One of the reasons for this is due to the latter being able to decompose much faster.

However, it is estimated that on average, the majority of dog’s poop will take up to 9 weeks to decompose and break down. It goes without saying that this is a long time, and if dog poop is regularly left for this duration, it will have a devastating effect on any grass or plants it is in contact with.

In fact, it can ruin most people’s lawns within no time at all. Likewise, dog poop can also be harmful to wildlife conservation areas or national parks because of the acidity in the poop.

Handy Hint: Here are some tips on how to protect your trees from dog urine, and how you can also prevent damage occurring to your well-kept lawn.

It is important to be aware that leaving dog poop in protected areas, as mentioned, can not only be harmful but also constitutes a serious offense that can result in a heavy fine or worse.

Within the first 7 days of being left, dog poop will stay relatively the same in appearance.

However, it will most likely contain pathogens that can be dangerous for both humans and wildlife. These pathogens are extracted from your dog’s digestive system when they empty their bowels and can also contain harmful bacteria, such as coliforms.

Therefore, you should always pick up your dog’s poop straight away before it becomes harmful to the environment.

During the 2nd and 3rd week, the poop will begin to decompose and biodegrade slightly, often turning a darker shade of brown. It is during this time that dangerous bacteria in the poop can become a real risk and pose an increased threat to wildlife.

Any animals that consume these bacteria can become very ill, and the same is true for any dogs or pets that do the same.

Mold may also begin to form on the outside of poop as the 3rd-week progresses.

Handy Hint: Young puppy poop will tend to disappear quicker as it’s not as solid as adult dog poop.

As the dog poop begins to further decompose, any eggs that might have been present in the waste will begin to hatch. These eggs will produce larvae that are parasitic and will be able to infect both humans and dogs.

It is essential that you pick up any dog poop that is left in your yard before it gets to this 4-week stage.

Although non-lethal, worms can cause symptoms similar to the flu and can make your pets sick.

The last thing that we want is for our children or family members to accidentally catch worms. Although this sounds unlikely, it happens more than people think.

For example, worms can easily be transferred by accidental contact with feces that are on items, such as your shoes, tennis balls, or your dog’s toys. This in turn could lead to worms being spread to surfaces and objects around the house.

Therefore, you should always be vigilant and careful to make sure that this does not happen. If you do pick up any dog poop lying around, make sure to wash your hands straight away and disinfect any surfaces you may have come into contact with.

During the 6th and 7th week stage, mold will normally have spread throughout the poop. This mold is usually not that dangerous to humans and animals.

However, there are types of mold that are more harmful than others.

For example, some molds will cause allergic reactions, whilst other molds will have a detrimental effect on the respiratory system.

Therefore, it is a good idea to pick up any poop that might be lying in your yard before it gets to this stage.

In the 7th and 8th week stage, the dog poop will begin to break down properly. It will have shrunk in size, and any grass on which it was lying would have probably stopped growing. This is because light cannot pass through poop due to its density, and this in turn stops plants from getting the light they need to survive.

Finally, in the 9th-week stage, most traces of the poop will have fully decomposed.

However, despite this, there could still be traces of harmful bacteria lingering on the ground. Unfortunately, these bacteria can still have the potential to harm wildlife.

Handy Hint: If you are worried about how many times a day your puppy is pooping, don’t be! They will poop a lot during 24 hours!

How to dispose of dog poop correctly

There are several ways you can dispose of your dog poop safely so that it does not affect the environment.

Firstly, you can use biodegradable doggie bags.

These bags can fully break down if disposed of correctly. However, it is important to choose the right company as some biodegradable doggie bags are of better quality than others. In fact, some are not fully biodegradable at all but are falsely advertised as being so.

Another option is to choose corn starch doggie bags from a reputable company, as they are vegetable-based and are 100% biodegradable.

Unfortunately, these types of doggie bags are more expensive than others but are worth every penny because they are better for the environment overall.

Some dog owners dispose of their dog’s poop by burying or composting it, however, there are many right and wrong ways to go about doing this.

Firstly, you cannot use a normal compost bin, and instead, you should use a separate composting system that contains nitrogen and carbon-rich materials. This system will dispose of the poop more safely and effectively compared to a normal compost heap.

Likewise, you could purchase a canine waste disposal unit, many of which can be found online. These effectively work like septic tanks and can be buried anywhere on your property.

You can then simply dispose of your dog’s poop by shoveling it into the system and occasionally adding water and a digester.

This then breaks down the poop into an easily disposable liquid that dissolves into the ground.

However, if you prefer, with a little bit of DIY savvy, you could build one yourself. You will find many guides online that will show you how to do this.

Next, we have the burying method which involves you digging a hole in your yard. To do this the hole needs to be dug at least 6 inches deep so that the poop cannot be dug up by your dog or any other animals.

If done correctly, this eliminates any chance of germs being spread around your yard. This method is somewhat controversial, however, as many owners are not keen on having a bunch of holes dug in their yards.

However, it should be noted that the poop should never be bagged as this could cause a blockage and is extremely bad for the environment.

You should also make sure to ask your local sewage center or relevant authority whether flushing dog poop is a viable option, as some recommend against doing this.

Lastly, there are water-soluble doggie bags designed to dissolve when placed in water.  These bags are made specifically for flushing and have less chance of ending up in landfills.

However, if this does happen, they will break down very quickly when compared to other types of doggie poop bags.

Important Tip: If you ever see white specks in your dog’s poop that are not moving, you need to know what this could be.

The bottom line is; it can take some time for dog poop to break down and biodegrade. That’s why it’s never a good idea to simply leave it. It needs to be cleaned up, no matter where your dog poops.

This isn’t the first time I’ve blogged about dog poop!