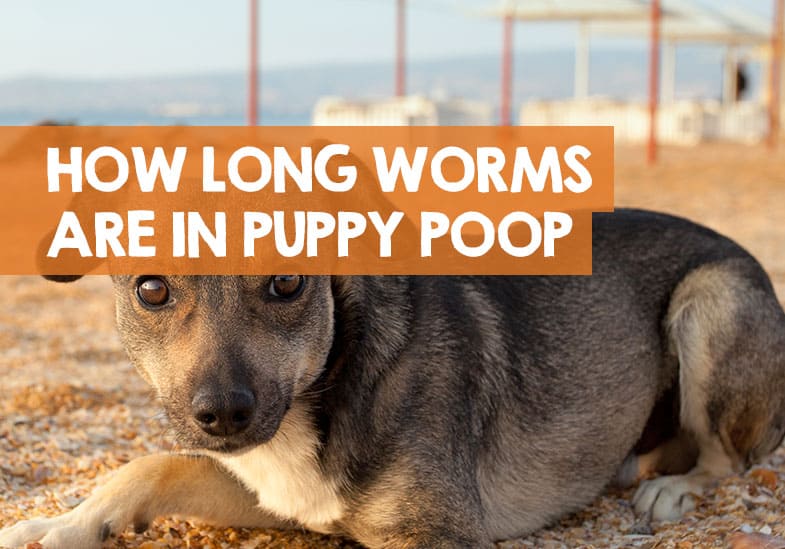 If your pup has all the signs of worms and has been dewormed, you might be wondering how long it will before they get the all-clear. Often you won’t know until you stop seeing worms in their poop.

Which begs the question really about how long it takes for your puppy to poop worms after deworming. I needed to know to help my friend out, so did all the research for you. Here’s the short answer followed by some related information.

How long will my puppy poop worms after deworming? Puppies will usually poop worms for a couple of days as the parasites die off between 2 and 14 hours. However, it’s not unusual for worms to still be pooped out for up to a week later.

How long does it take to get rid of worms in puppies?

How long it takes to get rid of worms in your puppy, with them all being pooped out really does depend on how bad the problem is. It might take as little as two hours for the treatment to start working and 12 hours for all the worms to come out in their poop in more minor cases.

Where the worm issue is much worse, then you may need to repeat treatments, and that might take up to two weeks for your pup to then be free of problems.

How to tell if your puppy has worms

If you have given your puppy treatment, and you are still seeing worms in their poop weeks after deworming, it’s not worked.

The most obvious signs are two which are tough to miss; that’s your puppy throwing up worms and worms in their poop – even after deworming you can still get them in bad cases.

Other signs can be when your puppy is growing or putting on weight as expected. They might not have that usual puppy energy and may not be all that interested come mealtime either.

Your puppy might also have diarrhea, which has streaks of blood, and they may be vomiting as well. Then there’s a tell-tale sign of an extended tummy.

Most of these symptoms can also be the signs of other conditions, so that means a quick chat with your vet is needed to ensure that your pup is getting the correct treatment.

What are the white worms in dog poop?

While no-one wants to closely examine their puppy’s poop, knowing what type of worms they have will make sure they get the right treatment.

How did my puppy get worms in the first place?

For many pups, the worm problem was transmitted from their mum. It happens when worms pass through her bloodstream to her unborn puppies or via her milk when’s she’s feeding her newborns… yes, puppies really can be born with worms.

It’s recommended that dog mums are wormed little and often, with small doses given from the middle of the pregnancy right up until the pups are born.

This helps to prevent a big hit of the medication, which may not be a great option for the unborn puppies, and instead ensures active ingredients are circulating to keep them worm free during this critical period

Once the puppies are born, they can pick up worms by coming into contact with poop infected with either worm eggs or larvae. Even when the poop is cleaned up, the eggs and larvae can survive for a long time on the soil or plants.

That means it’s essential to ensure that all household dogs have received treatment and are worm-free before the pup arrives home.

Dead animals and birds can be another problem, so do make sure that any areas your pup goes out to play in are free of any issues. Don’t let them eat the poop of other animals as this is a sure-fire way for puppies to get worms.

So far, we’ve been talking roundworms, but other types are transmitted in different ways. Tapeworms, for example, are carried by fleas, and then your pup becomes infested if he should swallow one.

Snails transmit lungworms, and heartworms are carried by mosquitoes that pass the parasite from one dog to the next – it’s also possible for them to get ill from slugs.

What to expect after deworming your puppy?

We’ve already established how long your puppy will poop worms after deworming, but that’s not the only thing to prepare for.

Most deworming treatments get to work pretty quickly and will be killing the worms within 2-6 hours of being given. The next time your puppy poops, you may well see either a whole worm or bits of them being passed depending on the medication used.

Sometimes the worms might still be alive and wriggling, which is pretty gross, but they will quickly die, and they’re much better out than in! Ensure that you immediately clean up after your puppy and then wash your own hands with an antibacterial soap.

How often should you deworm your puppy?

Prevention is much easier than cure, so getting into a regular deworming routine is essential for your pup’s health and wellbeing. Now, how often to deworm a puppy does depend on the age of your dog and where they live.

Most adult dogs should be dewormed every three months, along with monthly heartworm preventatives and flea treatments. Do make sure that the worm treatment also prevents tapeworm; if not, you’ll need to give an additional tablet to ensure that your dog has full protection.

Puppies should be given worming treatments every two weeks until they are around three months of age. Then they can move to monthly treatments till they are six months old before finally going to every three months after that point. You can read more about how often the deworming should be here.

Dogs living in rural areas can also run a higher risk of being infected with worms, especially if they are likely to come across bird or animal carcasses. That may mean that they need treatment every 6-8 weeks but check with your vet for information on the best dosage rates for where you live.

Can you get worms from sleeping with your dog?

Parasitic zoonoses are conditions that can be passed from an animal across to a human. The most common of these problems that we can get from our dogs are hookworms and roundworms.

It’s thought that these are passed by humans coming into contact with the worm’s eggs on the dog’s coat.

Those who are most at risk include young children and anyone with a compromised immune system.

Keeping up to date with regular working treatments is always important, but if you have an open wound, recently had surgery, or are a vulnerable person, then it’s probably best that your dog sleeps in their own bed at night.

Can you get worms from your dog licking you?

Lots of us kiss our dogs, but if you think about where their noses have been, then you can probably already see that it’s not likely to be the cleanest of places. Generally, the germs there don’t cause us humans too many problems, but parasites such as hookworm and roundworm can be passed by your dog licking you.

Just as with sharing your bed, if you have a weak immune system or recently had surgery, then you’ll also want to avoid the possibility of infection through licking.

Can roundworm eggs live in the carpet?

So, you’ve wormed your dog, but now you’re wondering if there might be worm eggs and larvae still living in the carpet and rugs. Unfortunately, you’re right also to be thinking about the home environment because both the worms and their eggs can live in your soft furnishings.

Thorough vacuuming and steam cleaning will clear up the problem but don’t forget to empty your vacuum and carefully dispose of the contents immediately. For hard surfaces, a solution of one-part bleach to thirty parts water will do the job. Don’t also forget to clean your puppy’s toys and their feed and water bowls.

If your puppy got worms through fleas, then it’s recommended that you use a spray specially designed for the job throughout your home. Make sure that dog beds and curtains don’t get missed out in the clean-up.

Worms in puppies aren’t all that unusual; in fact, if your pup’s mum didn’t get all the care they needed when pregnant, then it’s pretty likely that your youngster will be born with worms already in their digestive system.

However, once the deworming process starts, you can start to expect to stop seeing them in your puppy’s poop.

How long you puppy will poop worms after deworming can vary, but in most cases will be just a few days.