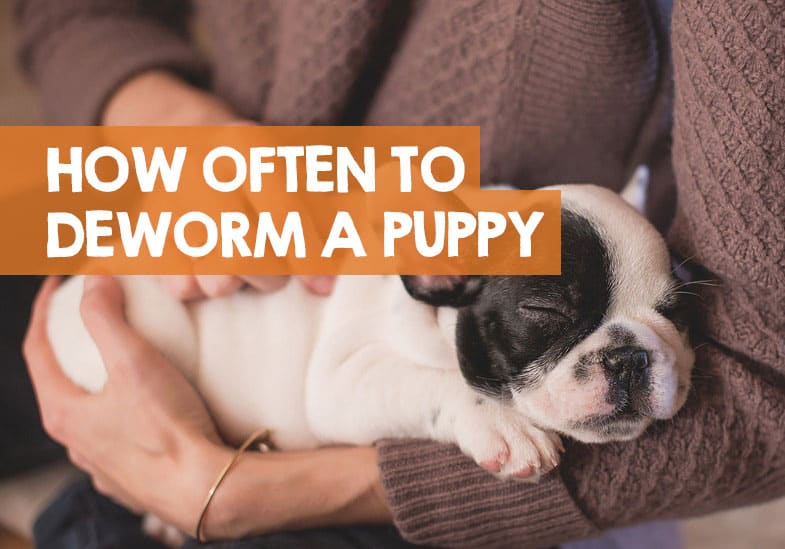 If you’ve not owned a puppy before, be prepared for a steep learning curve. There’s lot to consider, particularly in respect to their health. At this young age they have a weaker immune system than adult dogs and can be prone to parasitic infections if they are dewormed properly.

Aspects to consider will be how often to deworm new puppies, how much dewormer to use, and what age to deworm a puppy – all of which I will answer here today.

Worms are very common in puppies since they can easily be passed from mother to pup before birth or during feeding. In fact, most puppies are actually born with worms, so the deworming process is critical.

Read on to get the ins-and-outs of deworming your new puppy. I’ll also be sharing why it’s necessary, the right age and what to expect when you’ve just dewormed your puppy.

Why you need to deworm puppies

As I’ve already mentioned, mothers can transfer worms to their puppies. This happens before birth while the puppies are still in the womb. Two of the most common types of worms found in puppies are roundworms and hookworms.

Aside from being passed through the placenta before or during birth, it’s also possible for the infected mother to pass the hookworms and roundworms to her puppies during feeding.

Since puppies are prone to tasting and eating everything they encounter, it’s also possible for them to eat larvated eggs that may be in their environment.

What age to deworm a puppy?

As puppies are extremely susceptible to contracting worms from their mothers or their environment, vets recommend deworming them at an early age in their lives. The age to deworm a puppy will be 2 weeks, then 4, 6, 8. and 12 weeks.

If you start deworming your puppy at two weeks, then the cycle to follow would be 2, 4, 6, 8 and 12 weeks of age. Once the puppy reaches 12 weeks of age, the deworming process can be scheduled for every three months for the rest of its life.

Consult your vet for advice on the best dewormer for your type of dog.

How much dewormer to give a puppy?

How much dewormed to give your puppy will be typically based on their weight and type of infection. If your puppy is already showing signs of having worms, it’s best to take the little fellow directly to the vet to prescribe medication specific to that type of worm.

Deworming medication can come in the form of tablets, capsules or liquids. Each specific medication will have clear instructions on the labeling and packaging. Don’t exceed the amounts indicated on the label.

What are the common signs of worms in puppies?

Ideally, you want to deworm your puppy before they get worms. But your puppy might contract worms from an infected mother before the date you planned to do the deworming. It’s important to know what signs and symptoms to look for so that you can get your puppy to the vet.

Some of the common symptoms to look for include the following:

If you suspect your puppy might have worms or has been exposed to infected dogs, consult your vet to recommend the right medication to eradicate the problem.

What happens when you deworm a puppy?

Have you ever given any thought to the exact science of deworming your puppy? What actually happens to the worms? The two main ingredients found in puppy deworming medications are Pyrantel Pamoate and Niclosamide.

Pyrantel Pamoate belongs to a group of drugs known as anthelmintics. These medications are also known as “broad spectrum” because they can easily kill a whole host of parasites that might live in your dog’s gut. The medication works by paralyzing the worms and this prevents them from infecting the rest of your dogs’ intestines.

The puppy’s body can then expels the paralyzed worms through their stool. It’s completely normal to see dead worms in your puppy’s droppings. Some of the worms might still be alive as can be seen by a slight flicking motion. Rest assured, the worms will die.

If you’re taking your puppy to the vet the process is quite simple because the doctor does all the work! However, if you’re administering dewormer at home, there are a few simple steps to follow which include the following:

Step 1: Weigh the puppy to ensure the right dose is administered.

Step 2: If you’re using the liquid form, use a syringe. Draw up the required amount into the syringe. Be sure to not exceed the advised amount.

Step 3: It might be easy to give the puppy the medication if it’s sitting in your lap. Don’t make it too obvious that you’re about to administer medication. The puppy will clamp its mouth shut and it’ll become a huge struggle.

Step 4: Open the puppy’s mouth holding it open from behind the dog’s head and gently squirt the liquid to the back of its throat so that it flows down the throat. Don’t do this from the front as the puppy will spit it out. If you’re giving the pup a tablet, gently press the roof of its mouth to get the mouth open. Use your other hand to gently push the tablet to the back of the pup’s tongue. Close the mouth and gently stroke the throat until the tablet is swallowed.

Step 5: Have some water on hand. A squirt bottle would be handy in this instance. Give the puppy a quick squirt of water to help wash the tablet down the throat.

Step 6: Reward your pup with a small treat. This will make it easier to do next time. As the pup gets older, it might get more difficult to do as the pup is wise to your actions. Rewarding your pet will make the puppy less likely to fight the process.

Can I hide the dewormer in food?

Sometimes the only possible way to administer medicine to dogs and puppies might be to hide it in treats or food. This is a good idea when it comes to puppies because of their eagerness to guzzle everything down. However, it’s important to check with your vet if your dewormer can be given this way as some drugs shouldn’t be mixed with certain types of food.

If the dewormer is administered this way, don’t put the tablet or capsule in the whole bowl of food. The pup won’t be properly medicated if it doesn’t eat the tablet all at once. Consider placing the tablet in a chunk of cheese, inside a piece of sausage or anything else that the pup will eat in one gulp.

My sister recently adopted a new puppy. As you know, there are few things as cute as a new little puppy. They’re soft and fluffy and have that unique puppy smell that makes you want to hold and hug them all day long… not when they have worms though!