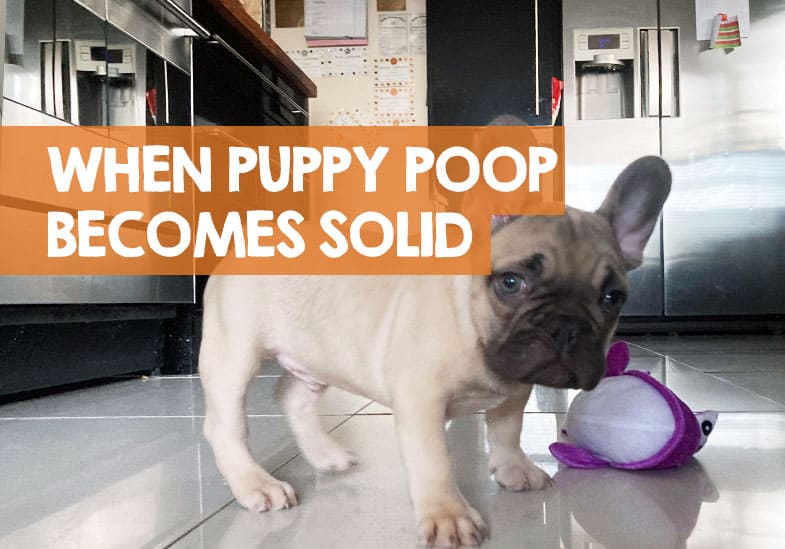 I loved it when my dogs were puppies, but it came with a heck of a lot of poop. And not the hard poop that’s easier to pick up either. Like all dogs of a young age, puppy’s poop is not solid. But just when does puppy poop become more solid so you have an easier task…

Newborn puppy poop becomes more solid (but still soft) typically at age of 3 to 4 weeks. By 8 to 10 weeks, healthy puppy poop becomes solid and is hardened to the firm consistency you would expect from an adult dog, unless something upsets their stomach.

It is normal for puppies to have soft poop for many weeks. However, you should start to notice the difference with it beginning to harden when they start weaning, which is 3 to 4 weeks of age. As your little furry friend begins to eat solid food, you can expect their poop texture to shift from soft to a more solid consistency.

Once a puppy is ready to leave the mother at 8 weeks then this is long it takes for puppy poop to harden to the level you would expect. It happens because they are eating more solid foods, rather than relying on milk for 100% of their diet.

There’s more to it though, and if your puppy’s poop is not solid yet despite them being older than 8 to 10 weeks, I have some advice for you – including how you can firm and harden up the stools.

When should my puppy poop become solid and harden?

There are many exciting things to say about being a puppy parent. But cleaning up your puppy’s runny poop isn’t one of them.

And the reason is obvious – the stool’s softness makes the whole scooping task nauseating to the core.

This explains why most puppy owners (especially new puppy parents) often want to know how long it will take for their puppy’s poop to harden. I would expect at ages 8 to 10 weeks.

But let me start by clarifying that it’s completely normal for puppies to have runny poop during their first few weeks of life. So, if you’re worried your puppy isn’t okay, don’t be.

The soft poop has got everything to do with a puppy’s limited diet after birth.

Just like human babies, puppies fully rely on their mother’s milk for a specific duration before quitting suckling. When a puppy is under three weeks old, they should only feed on their mom’s nutritious milk.

No water (here’s when to start them), and no solid food.

And if they’ve been separated from their mom for different reasons, they should be on a puppy milk formula.

Because of this liquid-based diet, your puppy will have soft poop.

But I promise you, it will get easier having a puppy.

Your puppy’s stool will begin to harden when they start weaning. Experts say that our little canine friends need to exclusively breastfeed (or feed on formula) for at least three to four weeks after birth.

So, when your puppy crosses the 3 to 4 weeks old mark, that’s the right time to begin weaning. This is often considered the ideal weaning age since our small furry friends start teething at around three weeks.

Nursing a teething puppy can be quite uncomfortable for the mother.

The puppy’s developing milk teeth are sharp and can cause pain to the mother’s teats during suckling. To avoid all this, the mother may pull away while her puppies are yet to suck to their fullest. Weaning at this point ensures the puppies don’t go hungry.

When you gradually introduce your puppy to high-quality solid foods, you will notice a difference in their poop. It won’t be as soft as when your puppy strictly fed on milk.

Handy Hint: Here’s how long after eating a dog will poop on average.

How long do puppies have soft stools?

After a few days of solid food, a puppy’s poop will be firmer and you won’t have the soft stools anymore. You might still get to deal with diarrhea here and then, but overall, stools will have hardened.

You’ll likely realize that despite the change from extremely soft to solid, your weaning puppy’s poop still doesn’t hold its shape when picked up.

So, if your puppy’s poop isn’t fully firm a few days after introducing solid food, don’t fret. It’s normal because milk and water are still a huge part of their diet.

When a puppy is about 8 weeks, they no longer need breast milk or formula. They will entirely depend on solid food and water, so their poop will appear fully firm.

And if you realize your furry friend likes to poop multiple times a day, no need to panic.

This means two things. One, any food they eat digests much faster, hence the frequent pooping.

And two, their food demands are higher because their stomachs can’t hold much food. Since they require more meals daily than an adult dog, they will poop more times.

Do puppies grow out of diarrhea? (When poop doesn’t harden)

All puppies will grow out of diarrhea unless you continue to feed them something that disagrees with them.

But in most cases, your puppy’s stool shouldn’t be too soft or too hard (tiny, pebble-like poop) a few weeks after weaning. Extremely loose or hard stool is a sign that something is wrong.

You should also be concerned and chat your vet if your puppy’s poop suddenly becomes runny after being firm for a while.

Some of the common causes of unhealthy stool texture in puppies include:

You should also pay attention to your puppy’s poop color and coating.

Healthy puppy poo should look like it a light brown or dark brown color. Anything besides that for instance, yellowish, whiteish, and black stool should worry you.

If your puppy’s stool looks somehow white and crumbly, they might be getting too much calcium from their daily diet. Excess calcium puts puppies at risk of bone development problems.

If your puppy’s poop has a black color, like coffee-black, they might be having internal bleeding (probably due to worm infections).  Also keep an eye out for black specks in poop, a bit like little bugs that don’t move – sometimes you might see small white dots too.

As for coating, your puppy’s poop shouldn’t have any blood spots or excess mucus-like coating around it, sometimes you might think it looks like jelly in the poop.

If you notice any unusual texture, coating, or color on their stool, it’s advisable to speak to your vet as soon as possible.

The earlier the vet identifies the underlying problem, the better.

How can I firm up my puppy’s stool?

I’ve never had to do this myself, but I did as a local vet on how I can harden my puppy’s poop so I can give you some pointers.

She told me that there are a few things you should consider if you want your puppy’s poop to be healthy and solid enough so that your cleaning task is less of a nightmare:

How long does it take for puppy poop to harden?

As mentioned earlier, it takes a few days after starting weaning for your puppy’s poop to become firmer and harden.

Normally, puppies begin taking solid foods and doing solid poops when they are about 3 to 4 weeks old, then 8 to 10 weeks for full firmness.

Is it normal for puppies to have soft poop?

Yes, it’s normal for puppies to have soft stools when they are still feeding solely on their mother’s milk or formula.

Why is my puppy’s poop not solid?

If your puppy is less than 3 weeks old, the reason is they’re yet to begin weaning (that is, eating solid foods). When they stop feeding on milk alone and start weaning, you will notice their poop becoming more solid.

How many times a day does a puppy poop?

Most puppies will poop about 5 times a day. This is normal for puppies of 6 months, 3 months, 8 weeks, and any age until they reach adulthood.

But there are a few factors that affect how many times a day puppy poops which I’ve outlined in this guide to a puppy’s daily pooping habits.

Puppies at 8 weeks of age can still have loose stools. It’s very normal for them to have frequent bouts of diarrhea as they get used to certain foods, eat things they should not.

However, if the loose stools persist for longer than 24 hours, consult with a vet.