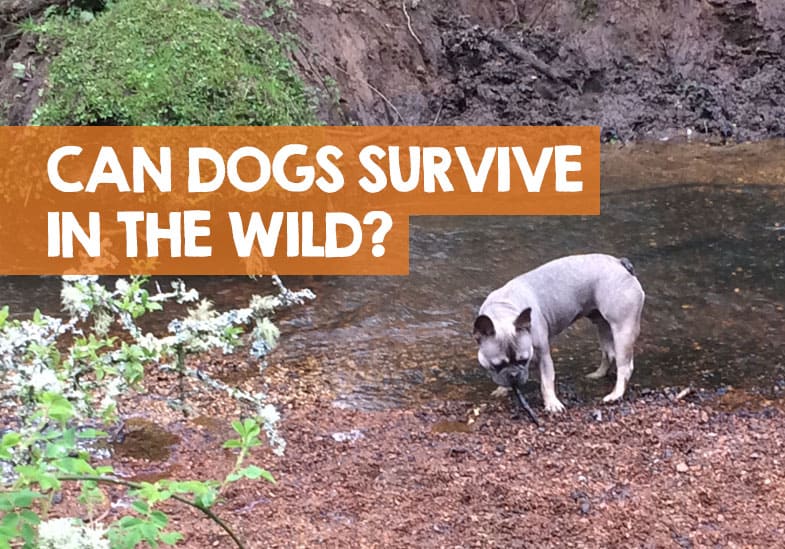 When my wife and I travel abroad, and in particular to places in the south Mediterranean, we are always shocked by the number of stray dogs we see. If I think of my own dog, I can’t imagine him being able to survive in the wild… but these foreign dogs survive on their own – or at least it appears they do.

Those dogs probably get a lot of help from tourists with snacks from the restaurant tables so might not be an accurate representation of whether dogs can survive in the wild… so what is the truth? Can dogs survive on their own and live in the wild and be better off?

Can dogs survive in the wild? Some dogs can survive on their own in the wild, and even thrive and be better off in the wild. However, this won’t always be the case. Survival in the wild will depend on the dog’s size, condition, sociability and prey drive.

That’s a broad answer, so please continue for an overview of documented examples of dogs living in the wild, and what factors go into making it a success.

Can dogs survive on their own in the wild and be better off?

When you think about it, there are some very well-documented canine communities that have either escaped from or been abandoned by humans. The most notable is the so-called ‘Dogs of Chernobyl‘. Their owners were not permitted to take their pets when they were forced to flee after the nuclear explosion in 1986.

Despite attempts to euthanize the dogs, several of these dogs survived in the wild woods of the exclusion zone, even during the harsh Ukrainian winters. Although it is many canine generations later, the dogs still suffer the effects of the radioactive fallout and have a limited lifespan.

There are currently efforts to shelter, feed and sterilize those that live near human settlements, such as the guard huts.

Other examples of dogs that survive in the wild are Australian cattle dogs and Pyrenean mountain dogs. They will routinely spend months alone, protecting livestock in areas that are not conducive to human survival.

If you are planning to live with your dog in the wild, attributes such as loyalty, watchfulness and a protective instinct come into play. Strength and endurance are important if you plan to harness the dogs for chores such as transport.

Dogs that have been inbred for highly specialized purposes, for example, ‘looking good on Instagram’, may not make it, on their own, past lunch on day 2.

Survival hierarchy of needs for dogs living in the wild

According to Maslow’s hierarchy of needs, basic requirements for human survival include food, water and shelter. Thereafter, we need security and a social structure.

If we extrapolate this model for canine survival, we can reasonably dispense with ego and self-actualisation needs. An exception may be made for that quadruped piranha, otherwise known as a Chihuahua.

The first need would be for water. Dogs are not as fussy as humans when it comes to drinking water so they will probably pass this hurdle. They may have digestive issues for a while but they will soon adapt.

Secondly, they will need food. For most dogs not living in the wild, this would be at 8 am and 4 pm every day. However, left to their own devices they will snack on anything, in between times.

Dogs are fortunate in that they are omnivores and their digestive systems will cope with eating proteins, fat, bones and starches. Many dogs do not even care how old their food is.

When dogs live in the wild, they will no doubt need to develop hunting skills in order to survive in the long run. Individual small dogs like terriers and Beagles need less food and will be able to follow small mammals into their burrows. They could also be agile enough to catch birds.

Hunting dogs, such as pointers, setters and beagles have an elevated prey drive and are relentless in tracking down small mammals and birds. Retrievers, Spaniels and Newfoundlands would have an advantage in the wetlands, and might even be successful at catching fish. Other dogs have lower prey drives – click to compare.

The social structure becomes important for slower, larger breeds, such as rottweilers and mastiffs as they will need to hunt in packs.

Canine species in the wild, such as jackals and wild dogs, do eat carrion, but they invariably need to compete with other animals to secure sufficient quantities. Individual dogs would not be able to live in the wild and survive as successfully as they won’t can’t compete as effectively.

Shelter is a concern for most domesticated dogs. However, in the wild, dogs who live outside will grow and shed hair in accordance with the changes in temperature. In extreme hot or cold climates, respectively, the Mexican Hairless and the Malamute would have an advantage.

In most other climates, even short-haired breeds will survive, with the help of their friends.

Although there is a dominance hierarchy and ‘survival of the fittest’ that comes into play, within the pack, the collective will take care of its members. For example, nursing mothers will be protected, and the very young fed by older siblings.

Research has shown that rather than breeding indiscriminately, the way street dogs do, packs of wild dogs have fewer offspring.  Among African wild dogs, the most efficient hunting mammals on that continent, it is usually the alpha male and female that mate, thereby preserving the dominant genes most likely to lead to the survival of the pack.

Even domesticated dogs have a highly developed sense of smell and this will serve them well in identifying friend, foe and food in the wild. Dogs also have more pigment in their irises so can withstand bright light for longer than their human counterparts.

Photos of packs of feral dogs show a prevalence of medium to large, cross bred dogs, with short hair. Most are lean but not too muscular. Small dogs routinely punch above their weight and don’t seem to survive when humans are not around to keep larger dogs in check.

After successive seasons, the pack would take on a uniform colour coat, suitable for adapting to the region. For example, in warmer areas, such as the desert, dogs tend to have lighter coloured coats. One could term them sandy-haired.

What dog breeds are likely to survive in the wild?

Among the small breeds, the Jack Russell and Cairn Terriers stand the best chances of survival. JRTs are energetic little dogs, bred to be rat catchers and to enter burrows in pursuit if their prey. Cairn Terriers are hardy wire-haired, Scottish dogs that seem to thrive in all weather conditions.

Spaniels and Beagles are slightly larger breeds. Beagles have a bad rap in that they are reportedly slower and do not match the intelligence of other hunting dogs. But they are dogged in pursuing their prey (their big ears help).

Spaniels have the same reputation but are better suited to the water.

The best mid-range dogs are collies, retrievers and heelers or cattle dogs. They bring all the attributes of the aforementioned breeds to the hunting party but have more bulk. The retrievers will sparkle in water.

For protection of the pack, and backup in a hunt, Doberman Pinschers are lithe, fast and aggressive. Rottweilers would make into the pack by virtue of their appearance, and any of the Pitbull types gain a place because of their reputation. These are both strong, powerful dogs with attitudes that do not invite opposition.

In the snow, Alaskan Malamutes have the intelligence, the work ethic and the strength required for long term survival. The large breeds, such as Pyrenean Mountain Dogs, St Bernards and Newfoundlands are all immensely powerful dogs with glowing reputations as working, carting and guard dogs.

Handy Hint: Some owners are fans of putting boots on their dogs in the snow, but is it necessary?

The St Bernard, due to its record of Alpine rescues, has the honour of being the national dog of Switzerland.

Regional dogs, such as the Boerboel and the Rhodesian Ridgeback would be high on the list of survivors in the Southern African region.  The Thai also have a Ridgeback, and in Indochina, you will find a formidable breed of domesticated dingo which would easily revert to being free range. The Irish Wolfhound would no doubt love to join its namesake in the wild.

Do dogs live longer in the wild?

Whilst there is no research to prove whether dogs live longer in the wild, the best assumption would be no, they do not. If you think of the risks such as illness with no vets, food sources, water, traffic, fights, and other potential predators, they life expectancy of a wild dog will be lower.

Handy Hint: Here’s the truth about whether male or female dogs live longer.

Can I release my dog into the wild?

Of course you can release your dog into the wild, but whether they will survive or not is another matter. Most dogs who have been domesticated will struggle to adapt when released into the wild.

As well as the ethics of releasing a dog into the wild, there are laws too.

For example, in the UK when you release a dog into the wild you are contravening the Wildlife and Countryside Act of 1981. Section 14 of the act prohibits releasing dogs into the wild as a non-native animal.

After rats and cats, feral dogs have become the world’s third largest human-introduced threat to wildlife. They are responsible for the extinction of almost a dozen species of birds and mammals, and are thought to be a threat to another 200 species, some of which are on the endangered list.

Releasing a dog into the wild is both irresponsible and illegal.

It’s also ethically wrong, as most pet dogs will not be able to adapt and survive in the wild.