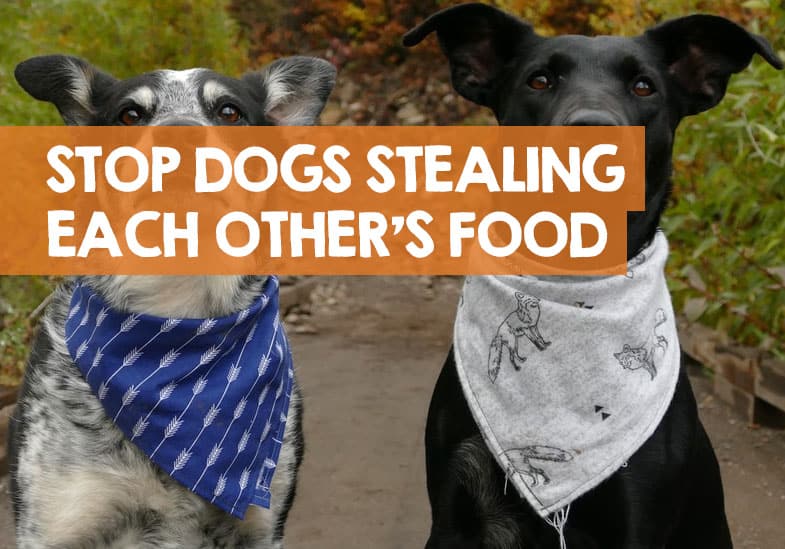 I love taking some time off and going up to the cottage with my family in the summer. It’s fun to get everyone together and just relax for a few days. The only issue I used to have is when my dog would steal food from my parent’s dog.

It always ended up becoming such as an issue. I ended up working on the behavior and have managed now to stop my dog from stealing food form other dogs, and here’s how I did it.

Probably the simplest way to stop a dog stealing food from another dog is to supervise feeding time and establishing clear bowl boundaries. Another way is to feed the dogs separately, especially if the issue is with a dog that you only see occasionally.

How to stop your dog stealing food from your other dog

That’s not always possible though, so here’s what to do if you have two or more dogs living at home and you want to stop food stealing. Lower down the page I explain how to deal with visiting dogs and the stealing of each other’s food.

For this to work, you will need to dedicate a lot of time hanging out with your dogs at mealtimes. Every time the dogs have a meal, fill up both bowls without the animals being present in the room.

Once completed, bring in the dog that has been stealing the food. Allow him to eat without interruption. If he starts to move towards the second bowl, start step 2.

Step in between the dog and the second bowl. Use your body as a shield to keep him away. Even give him a little push if he does not understand right away. Use your words and commands that he is aware of.

For instance, say “leave it” in a clear, firm voice. Do not say anything else to not confuse him. Continue this until the dog stops trying to steal from the other dog’s food bowl.

Once the dog has stopped trying to steal your other dog’s food, give him lots of praise. Pet him and give him a treat.

This is not a one-time cure for this type of behaviour. You will need to do the same thing over and over for weeks until the first dog stops trying to steal form the other dog’s food bowl.

If you do not have enough free time to commit to this, it might be worth hiring a dog sitter. You can explain to them what you are trying to do and ask them to continue the training.

Step 4 – Let them eat together

Finally, it is time to see if the training has worked to stop the dog stealing the other’s food. To do this, feed both dogs at the same time in the same place.

Stand close by and be prepared to intervene if the first dog goes for the other bowl of food. If this happens, use the “leave it” command.

Eventually, your dog will get the message and they will be able to eat together without supervision.

The method above is worth a shot if you have multiple dogs at home at all times. However, if the problem is only occurring when you are visiting with another dog (like in my case), the process would be different.

The easiest thing, in this case, would be to feed the dogs at different schedules, since it will only be for a few days per year anyway.

Step 1 – Train them for different schedules

Your dogs will get hungry around the same time as each other, that’s only natural. The trick is to feed the dominant one just a little ahead of the other. Then he can eat his meal quickly and the submissive dog can spend as much time as he wants with his.

You will need to have an area where each dog can eat privately one at a time. This could be in the laundry room, or any room that has a door.

You could also set up baby gates around the kitchen. Make sure to always have filled water bowls accessible to both dogs at all times.

Bring the first dog into the eating area and shut the door or close the gates. Give the second dog something tempting such as a toy to keep him occupied in the meantime.

The first dog will be given 10 minutes to eat his food alone, and then he will be removed from the area and distracted with a toy.

Bring the second dog in and shut the door or close the gates. Give that dog 10 minutes to finish his meal, and then open the door again.

This should give the second dog less anxiety because he does not have to worry about his food being stolen anymore.

Why is my dog stealing food from other dogs?

There are two main reasons why dogs steal food from others. The first reason is simply that the first dog has less of an appetite or is eating at a slow pace.

The second dog will press their advantage and gobble up the leftovers. This is their instinct to gobble down as much food as they can.

The second reason is that one of the dogs is adopting the alpha role. They are trying to show their dominance over the other dog, in this case by eating their food.

This is usually the case if you bring a new dog home or visit with a family member’s pet.

Weirdly, some dogs will even start peeing on their food bowls when distressed like this.

Why is this a problem?

The main problem with food thieves and dogs that steal, is that one dog will have overeaten while the other hasn’t eaten enough. This can cause the first dog to become overweight and the second to become underweight over time.

Another issue is that the first dog will eat too quickly because they know that they are being bad. This can cause them to become physically sick.

Another related problem is that the dog may start to steal food from humans as well. If he is used to stealing other dog food, he may start jumping onto the table or counter to push the limits.

Dogs can get very sick from eating human food, so this needs to be avoided at all costs.

Handy Hint: You might even have a dog who is stealing food from your cat. Here’s why it’s bad if it becomes regular, and also how you can stop it.

Why is my dog eating so slowly?

Once you give both dogs the same amount of time to eat, it can be clearer for you to notice potential issues.

For example, if the second dog is taking twice as long to eat as the first one, this could be a sign of a problem.

Take him to the vet for a consultation, as this could be an indication of a toothache (here’s how to tell). He might be eating slowly because he is avoiding chewing with certain teeth.

It may also be an upset stomach that needs to be addressed by a vet.

If it is a health issue that can be healed, this may even solve the food issue on its own. If both dogs are eating at the same pace, one will be unable to steal food from the other.

Dogs are entirely led by their stomach, so given half a chance, most will take the opportunity to steal food from another dog.

However, it can be trained out of them.

If you have tried these tips I would love to hear how you got on, so please do comment on our social media channels.