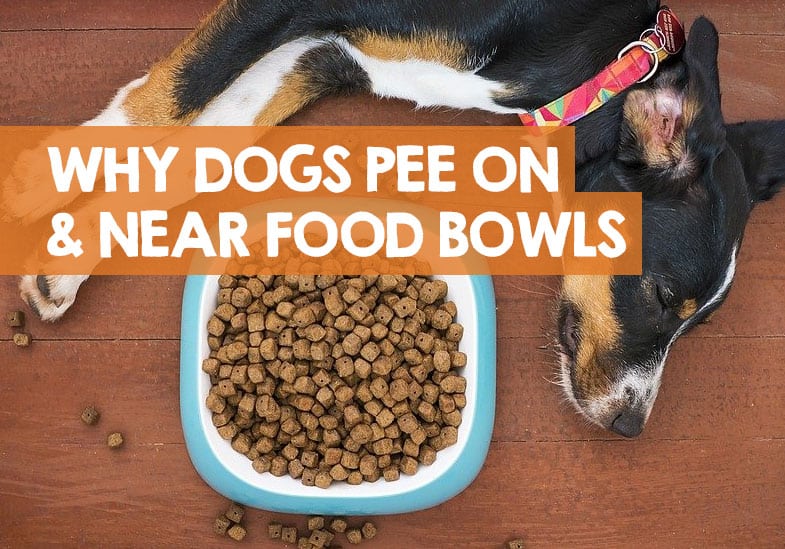 Last week I was witness to what was one of the strangest things I’ve ever seen my dog do… and he’s done a lot of weird things in his time. He walked up to his food and water bowls, cocked his leg, and shot a warm stream of hot urine all over them!

What in the world was that all about? What would possess my dog to pee on his food bowl? It’s crazy behavior I am sure you would agree. But actually, once I found out the reasons it makes a lot of sense. Let me share that with you below.

Why does my dog pee on his food bowl? Dogs will pee on and near their food or water bowls to communicate a problem. This can include marking their bowls as theirs to stop other dogs eating and drinking there. It will certainly be due to a fear or anxiety, so should be treated by a vet.

That’s the brief answer, but there’s a lot more to it, as I’ve detailed below. Please take a read of it all, as it’s fascinating stuff.

Why does my dog pee on his water bowl and food bowl?

Take a moment to picture this situation. You notice it is time to feed your hungry dog, so you make your way to the kitchen to prepare his food. After you have filled your dog’s bowl full of his favorite kibble, you place the bowl on the kitchen floor.

Your dog looks up at you, asking for permission to eat and you give the go-ahead for him to start tucking into his meal. However, instead of eating it straight away, he does the unthinkable. Your dog cocks his leg and pees all over the bowl, ruining the food and making a mess on the kitchen floor.

Does this sound familiar to you? Do you want to know why your dog pees near the food bowl, or even in it?

If your answer is yes, then you are not alone. Many dog owners experience this strange phenomenon from time to time, even those with a dog who has no prior history of peeing in the house.

However, finding out why dogs pee on their food bowls is sometimes a battle in itself, with little information being readily found online. Therefore, gaining an insight into this rather unpleasant behavior can be frustrating.

As a result, it is easy to become disheartened and impatient with your dog, or on the flip side, anxious whether there is something wrong with his or her health.

Thankfully, if you are currently having issues with your dog peeing on his food bowl at home, let me help you to better understand what is causing this behavior.

Dogs pee on their food bowl to communicate their feelings

To better understand the root cause of why dogs pee on their food, we first have to take a detailed, yet fascinating look into why dogs urinate on objects in the first place. It will be clear to most owners that peeing is an integral part of their dog’s lives, with most dogs having a favorite tree or post that they regularly choose to cock their leg up against.

However, what might not be so clear is the reason why this is so important to them.

First and foremost, the majority of dogs will pee on objects (and that includes food bowls) to leave their scent on them – no doubt you will have seen them do this countless times around your local neighborhood whilst out on a walk.

Handy Hint: Here’s how you can protect trees on your property from being killed by dog urine.

Dogs are territorial creatures and will leave their scent on objects to let other dogs know that this is their spot, or that they are active in the area.

Additionally, dogs will also pee on areas that have already been scent marked by other canines. This is your dog’s way of marking over the original scent and essentially tells the other canine that he is further down the hierarchy than them.

Put simply, this means that your dog is making a statement that he is of a higher rank in the pack. This particularly the case when your dog pees in your other dog’s food bowl. It’s all about the hierarchy. Some owners think their dog pees indoors out of spite – it’s not the case.

Quite often, there will be a popular object in the neighborhood in which multiple dogs battle for supremacy in terms of scent marking, such as an unfortunate post box, lamp post, or car wheel.

This is a similar sort of behavior to barking, as dogs will often bark when they perceive that there is an intruder in their territory. Some dogs can take this behavior further and will defecate when they possess a particularly territorial nature or personality.

However, it is worth noting urinating is by far the most common way that dogs show ownership of their territory, next to barking (in fact, pooping to mark territory is rather rare).

Scenting via urination in dogs primarily comes from an evolutionary urge, and as such, it is very strong in most dogs.

However, it is especially strong in dogs that have not been neutered, as male canines will additionally scent to let females in heat know that they are in the area.

Furthermore, it is worth mentioning that dogs will only begin to scent when they reach adulthood, and not as puppies.

Handy Hint: Puppies will also pee when they get too excited. This is for different reasons to the ones explained in this guide, but equally as fascinating.

Why do dogs pee on their food and water bowl?

After reading the section above, you will probably have guessed as to the reason why your dog is peeing on its dog bowl and food.

However, it should be mentioned that this sort of behavior is far from the norm for most canines and can sometimes be an indicator of psychological or behavioral problems – it is not instinctual for dogs to eliminate waste near their food.

If your dog is constantly peeing on its food bowl and has been doing it for a long time, then you should consult your vet so that they can check that there isn’t anything more serious happening.

That being said, dogs will sometimes “mark their territory” in the form of peeing in or around their food bowls and water bowls. This can often happen when you bring a new dog into the household or if a friend brings over their pooch.

In rare cases, this can even happen when new people have come to stay or if friends are visiting. The reason for this will often come down to the dog feeling uncomfortable about its position in the pack, likely due to the presence of a new unfamiliar face or dog – or even a new baby in the house.

Why does my dog pee in my other dog’s food bowl?

Likewise, dogs may also pee in their bowls if another dog you own has a habit of stealing their food. Essentially, they will mark the food as theirs and this will usually be enough to deter any greedy pooch from going near their bowl and drinking the water.

Some dogs will even do this while they are in the process of eating, especially if the offending dog is close by, which can be rather unpleasant to witness.

Unfortunately, this sort of habit is usually a by-product of fear and anxiety and should be taken seriously if it is a regular occurrence. At times, this can also be a sign that your dog feels bullied or is fearful of other dogs or pets in your home. I’ve even heard when dogs will pee on people for similar reasons.

Likewise, if your dog isn’t necessarily peeing in its bowl but is urinating while eating, it could be a sign of potential urinary problems. If you suspect your dog has this issue, then you should take them to the vet immediately.

Although urinary problems are often manageable, they can sometimes be an indicator of more serious health conditions such as cancer.

How do you stop a dog peeing on its food bowl?

Once you or your vet has figured out the cause of the issue, there are a few things you can try to curb your pup’s unsanitary habit.

For example, if your dog is marking its food because it is territorial, then you can try moving the bowl to an area of the house in which there are no other dogs.

At times, this can often be enough to stop this behavior, especially if the room you choose is quiet and free of any distractions.

Furthermore, if you believe your presence has an effect on your pooches eating habits, or you feel as if you are making them nervous, then you can leave the room too.

However, it is important to note that you shouldn’t close the door or lock your dog in when doing this. As this could make them feel anxious and could lead to further behavioral problems down the line, especially if they believe they are being punished for some reason.

Handy Hint: You can use the tips I published on how to stop dogs peeing on furniture, as often the training and little hacks will work just the same.

Similarly, if you own another dog that is prone to stealing, you could try putting them in the yard or in other areas in the house where they feel comfortable while your pup eats.

Sometimes the absence of any other pets within the immediate vicinity can make anxious dogs feel less threatened, and as a result, help curb weird behaviors such as peeing or scenting at mealtimes.

Likewise, training dogs in your household to leave food alone unless you permit them can also help.

If your dog is peeing on the water bowl and near their food, then I hope that with some patience, you will then be able to curb the habit. You might need to seek professional help with this one, as once the habit is ingrained, it can be hard to break.