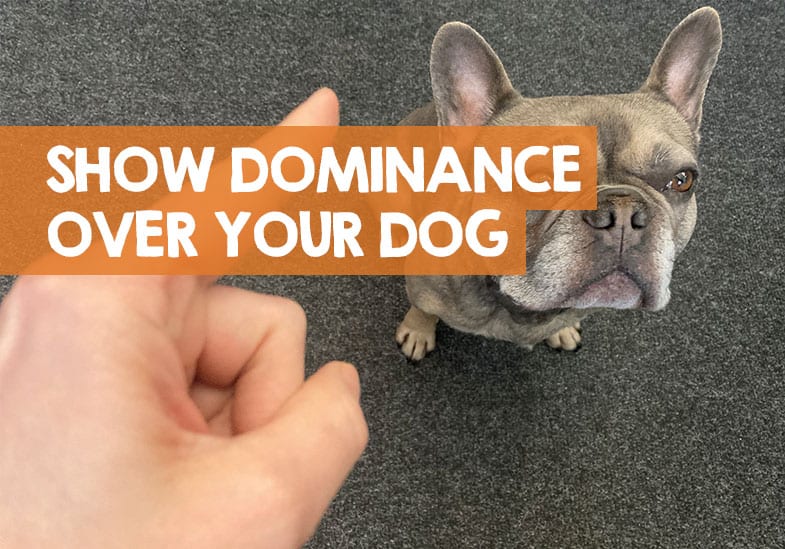 Due to character, background, or training, some dogs will not consider their owner the pack leader. This can cause a lot of problems, including aggressive behavior.

With that in mind, many owners who encounter this issue will need to re-asset themselves as the alpha, and that means learning how to assert dominance over a dog… without being cruel or mean.

How to assert dominance over a dog

Owners must always show their dog they are the pack leader and alpha. Without proper guidance, many dogs, particularly males, will naturally challenge their owners for a higher ranking in the pack. This can quickly escalate to battles over dominance in and outside of the home environment, not just with other dogs, but also humans.

However, for many dog owners, the act of showing dominance over their dog feels unnatural or even cruel at times. Despite this, it is a vital part of ownership and should result in a happier and more relaxed dog, and wider family environment.

Thankfully, learning how to assert dominance over your dog need not be aggressive or over the top to get results. There are many methods owners can use, many of which are remarkably subtle, involving body language, tone of voice, and eye contact.

Below I will explain how you can show your dog you are the pack leader and how to change the dominant force being from your dog, to you.

1. Put yourself first and don’t led the dog lead

As a first-time dog owner, it can be very easy to put yourself second and allow your dog to take the reins when it comes to a multitude of different scenarios. However, if you don’t act quickly to display dominance over your dog, it can quickly become problematic.

For example, most dogs are notorious for pulling on the leash, and although this behavior may seem somewhat innocent, it is still a form of disobedience and should be discouraged at an early age.

Never allow your dog to lead the way on a walk unless they are off-leash and you have given them permission. If you don’t do this, you will find it a lot harder to assert dominance over your dog.

Instead of pulling you down the street, they should be encouraged to walk beside or even behind you – you are the top dog, and as such, you should always lead.

As well as this, you should also discourage your dog from sitting close to the door before a walk. Always ensure that you are the first out of the door, and if necessary, train your dog to sit and wait until they are given the command to follow you.

Although this may sound over the top, it is a great way to subtly communicate to your dog that you are the leader of the pack and the alpha in charge.

Plus, if you and your pooch eat at the same time, make sure that eat your meal first. By doing this, you will indicate that your mealtime is more important, a common behavior amongst alpha canines.

As dog owners, we must make sure we correct continuous bad behavior if we want our dogs to respect us and look on us as the alpha pack leader. Naturally, almost all dogs misbehave at times, which is part and parcel of their canine nature.

However, in some cases, dogs will regularly engage in bad behavior in a bid to directly challenge their place in the hierarchy, causing unnecessary issues at home as the dog attempts to assert dominance over the humans.

Handy Hint: Here are 21 signs you can look for to tell if your dog has no respect for you as a pack leader and alpha.

Unfortunately, it can sometimes be difficult for owners to see their dogs in this way, chalking their problematic habits down to personality traits and shrugging off any naughty behavior.

For example, puppies are the most likely to act troublesome, pulling on leads, stealing food, and peeing on furniture. However, in young dogs, these behaviors are not always indicative of a problem and, are, instead, purely a result of a lack of training.

On the opposite spectrum, adult dogs will sometimes test their owner’s patience by pushing boundaries, often growling, snapping, or refusing to come when called to show their dominance.

In most cases, this is a direct challenge, and it should never be dismissed or ignored.

If you find yourself in a position such as this, make sure you remain calm and firmly rebuke your dog with a command.

Furthermore, you must never scream, shout, hit, or otherwise punish your dog whilst correcting any bad behavior. To do so will only undermine your authority and cause your dog to develop serious behavioral issues in the future.

3. Give your dog permission to eat

As the leader of the pack, you must always be responsible for controlling your dog’s resources. In a wild setting, the top dog alphas will lead their pack members on hunts, searching for animals to chase down, kill and consume.

In a sense, it is the pack leader’s responsibility to ensure that the whole group survives.

At home, this dynamic is slightly different, however, you should still ensure that you control when and where your dog eats.

Similarly, make sure that you teach your dog to wait for its food and never to snatch or grab it out of your hands. Unfortunately, many dogs retain this habit from puppyhood, having never been taught to gently take food from their owner’s hands.

Although this behavior may not seem a big deal, it can quickly spiral into increasingly worse habits, some of which can prove to be incredibly destructive.

For example, food-motivated dogs who are not educated in proper food etiquette by their pet parents could bite children’s fingers in an attempt to get food, sometimes drawing blood and causing injuries.

Additionally, without proper boundaries, they may take food off the kitchen counter or steal from your plate when you are distracted. Therefore, you must teach your dog to wait patiently before it is fed or given treats so that this behavior does not arise.

Handy Hint: Dominant dogs will try and jump up to the table and kitchen counters to steal your food. This is how you stop counter-surfing.

All dogs, without exception, need playtime to stay mentally and physically stimulated. Additionally, many popular breeds come from working backgrounds that require them to complete tasks and engage in various physical activities.

Without a regular playtime or exercise routine, the majority of dogs, regardless of breed, will quickly become depressed and severely bored.

However, despite this information, you must still discourage your dog from playing during inappropriate situations if you want to show your dog you are the pack leader.

For example, one way how you can assert dominance over a dog can be achieved is by teaching your dog not to instigate play with other canines until you have given them permission to do this.

Firstly, keep your dog on the lead, get them to sit, and then command them to wait. After they have visibly relaxed, take them off the leash and only allow them to run towards the dogs after you have said “okay”.

After repeating this method for a few weeks, your pet should begin to look at you for permission – because you have learned how to show dominance to your dog.

Whilst at home, you can also confine toys to certain areas of the house where your dog is free to play, such as the garden or patio. Try and discourage them from playing with their toys in areas like the kitchen, bedroom, or stairs and take the toys away if they continue to bring them there.

Similarly, do not be afraid to say no to your dog if you are too busy to play with them (when occupied or in the middle of a task).

By doing this, you will allow your dog freedom to play but only where and when you have given them permission to do so.

Did You Know? Some dogs will even try to show they are the dominant one by peeing on you and other people. Here’s more on that strange habit.

There is nothing wrong with snuggling up to your beloved companion from to time, especially on cold winter nights.

However, if you want your dog to listen to you as the pack leader, you must occasionally set boundaries when it comes to personal space.

For example, it is not a good idea to allow your dog to sleep on your bed with you every night.

Although this may be difficult to hear for a lot of owners, allowing this can negatively affect your dog’s perception and effectively cause them to see you as a fellow pack member on equal standing, instead of the pack leader.

Another example where your dog could think he’s the dominant one, is when he jumps up into your seat as soon as you leave the room.

Get your dog off your spot now and show him that you are the pack leader and the dominant one in the relationship.

Dogs are social creatures and in the wild, they naturally form packs to survive. Although most of our furry companions live a more sheltered life nowadays, they still retain their instincts and these often play a pivotal role in their relationship with their owners.

At times, dogs will occasionally view themselves as the leader of the pack and, therefore, try to exert dominance over family members and pets living in the same household.

Unfortunately, if left unaddressed, this behavior can quickly become uncontrollable and lead to aggressive and destructive tendencies from said dogs.

What I would say though, is that most dogs who have been trained properly from a puppy will grow into loving, trusting, and obedient pets that create strong bonds with their human masters. It’s in their nature to be extremely loyal and they will follow their owners to the end of the earth and back.

I see this with my own dog Claude, who seems to respect me and respects the fair decisions I make. He shows signs that he sees me as the alpha and because of this, he’s a gentle and well-behaved dog who can adapt to almost any social situation.

A lot of this boils down to showing dominance to a dog during the formative years of life. If you can get this cracked when they are puppies, it’s a lot easier.