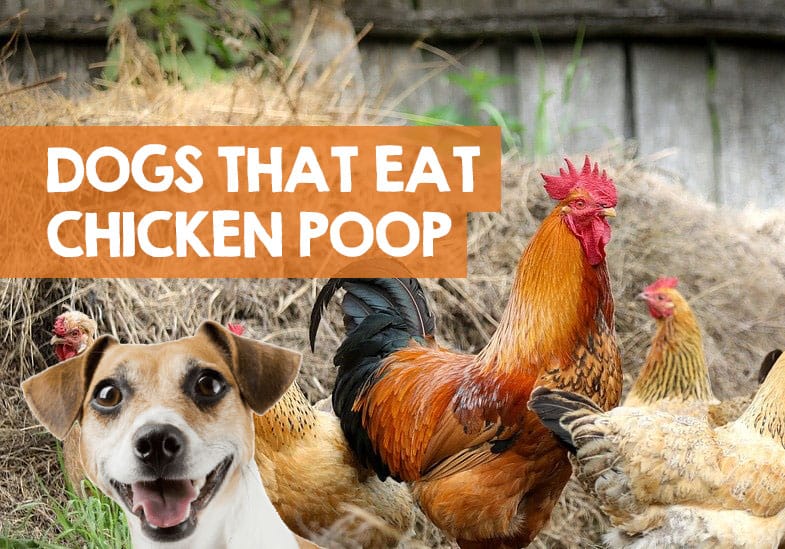 Many friends of mine have started to keep chickens in recent years, setting up small coops in their yards and gardens. That’s all well and good, but a lot of these friends also own dogs; having both animals comes with challenges and risks, particularly with the chicken poop.

Keeping chickens requires a lot of hard work as their poop needs cleaning out each day. If you don’t do this, it can increase the chance of your dog eating chicken poop and the subsequent risks of this to your dog’s health.

If you’ve got both or are planning on doing so, you need to know what these risks are, and how it can be bad for your dog to eat chicken poop. Here’s all you need to know in one helpful guide.

Is chicken poop bad for chickens? It can be harmful for dogs to eat chicken poop, but the risk is low. If your chickens are healthy and free from worms, salmonella, and disease then it’s unlikely that a little chicken poop will hurt your dog or make them sick.

Is chicken poop toxic to dogs?

Anybody with a dog will know how undiscerning they can be when it comes to eating things. I’ve seen my own dog eat slugs, chew on horse manure, and even try to eat a dead rat.

If you own chickens and dogs, be prepared for your dog to try and eat some of the poop – which let’s face it, is never going to be in short supply!

But just how toxic or harmful is it for dogs to eat chicken poop?

Whilst chicken poop itself isn’t toxic to dogs, it may contain many harmful elements which can make dogs sick – and not just from being eaten. Dogs can also get sick with germs that go airborne from the poop and then get inhaled by a dog.

But the risk is low to moderate and is entirely dependent on whether the chickens and hens themselves are sick or carrying disease or parasites.

There will always be the possibility of harm from the following illnesses that transfer via animal feces.

But the biggest risk where chicken poop can make dogs sick is by being eaten, as it can pass salmonella from the chicken to the dog. Salmonella bacteria is shed from the chicken via feces and can then infect the dog once ingested.

There is also the possibility of a dog getting sick from eating chicken poop due to giardia. According to the CDC.gov website, giardia is spread by:

The CDC go on to say that giardia can also be contracted when dogs roll and play in contaminated soil or drinking water that has been exposed to the parasite… all things that you could see as being likely in a chicken coop environment.

Giardia is a microscopic parasite, so you won’t even be able to see it in your dog’s own poop.

Dogs can also get worms from eating chicken poop, including these nasties listed below.

All the worm types above can be passed from animal to animal via infected feces. This means that if a chicken has worms, a dog that eats the infected poop containing worms’ eggs can also become a host for the parasites. It could also occur if a dog was to attack and kill a chicken, and ingesting fecal matter.

There is also a slim chance of dogs getting parvo from eating chicken poop. I’ve talked about parvovirus before, where puppies can get it on beaches. It’s a highly contagious disease and is usually spread when dogs eat the feces of parvo-contaminated dogs.

My belief that it could also be transferable via chicken poop is based on a 2013 research paper I read that explains how chickens can get parvovirus (view source). Based on that, if you have sick chickens, it doesn’t take too much of a leap of faith to think it’s possible for parvo to be contracted via chicken poop eating.

If your chickens are disease and parasite free, it’s unlikely that a dog will get sick from eating chicken poop, as all that’s really coming through then is the chicken feed.

However, you have no guarantee that there won’t be a parasite or possible infectious element in the chicken poop that the dog eats, so you need to prevent it.

Can dogs get coccidia from eating chicken poop?

Coccidiosis, while present in both birds and dogs, is species specific. This means the strains carried by poultry cannot be passed to dogs and vice versa.

Handy Hint: Have you ever seen slugs on or in your dog’s poop? The reason the slugs are there might surprise you, here’s what you need to know.

What if my dog eats chicken poop?

If you see your dog eating chicken poop, I would discourage them from doing so, but at the same time would not panic. Whilst it can be bad for them to eat it, a few pellets here and there might not be harmful.

The bottom line is this; if you have sick chickens who have disease and parasites, then yes, your dog has a far higher chance of getting ill from eating poultry feces.

With salmonella topping the list of possible illnesses, here are the signs to look out for with salmonella poisoning (and even this can be rare according to the Whole Dog Journal:

“Though it’s relatively uncommon for dogs to actually become ill from ingesting Salmonella – the illness is called “salmonellosis” – the canine symptoms are similar to those seen in humans, including diarrhea, sometimes with blood and/or mucous; vomiting and refusal to eat; fever; lethargy; and abdominal pain and cramping.”

When it comes to worms, in most cases you will see them in your dog’s poop. Other symptoms include weakness, weight loss, swollen stomach, loss of appetite, and vomiting.

How do you stop a dog from eating chicken poop?

Whilst the risks of illness are relatively low, you should still try to stop your dog eating chicken poop. Here is a selection of tips to help you do this.

1. Use cayenne pepper or chili sauce

I’ve not tried this with chicken poop, but our dog used to eat our cat’s poop until I started dropping chili sauce and cayenne pepper onto it.

I would go out early in the morning, find the poop, and add my own special ingredients to it. After a few attempts, our dog Claude realized he’d get quite a nasty taste so soon stopped the filthy habit.

Try the same with chicken poop, as hot chili or cayenne pepper is something that dog’s hate the taste of.

2. Add pineapple to your chicken’s diet

I have no evidence that this works, but it’s worth a shot as apparently dogs hate the taste of pineapple… so if it’s in your chicken’s poop it should stop your dog wanting to eat it.

Like the cayenne pepper tip, it might be something you do for a week until your dog makes the association, then you can stop feeding it.

3. Keep the coop and run area secure and clean

As the possible harmful bacteria is in the chicken poop, you need to stop access to the area. The best way to stop diseases being passed between dogs and chickens is to keep their enclosures completely separate.

Aside from these tips, you could also try distracting your dog, keeping him supervised, and obedience training – all of which are far too obvious for me to list in detail here.

Handy Hint: Dogs can get along with chickens but you should never take anything for granted. Here’s what you need to know about the chances of your dog killing a live chicken and which breeds are best suited to keeping poultry.

Is dog poop bad for chickens?

Of course, it can also work the other way around, with your chickens possibly eating your dog’s poop. The risks are the same, albeit in reverse.

However, I believe dogs are more at risk of developing disease and sickness in their poop due to their wider exposure to the world. They go on walks and runs where can are exposed to a wider and more frequent volume of possible illnesses.

For me that means it’s going to be more likely that a chicken would get ill from eating dog poop, rather than the switched scenario.

Handy Hint: I’ve written a different guide that details all the ways in which chickens can make dogs sick and the possible diseases that could be passed.

Having spoken to a vet last week to confirm my findings, she agreed with me that chicken poop can be bad for dogs, but it is a low risk. She said that it almost goes without saying, that you should try to avoid it happening if you can.

Something things are easier said than done though! Dogs are persistent and do eat the strangest things as you can see in these other blog posts I’ve research below.