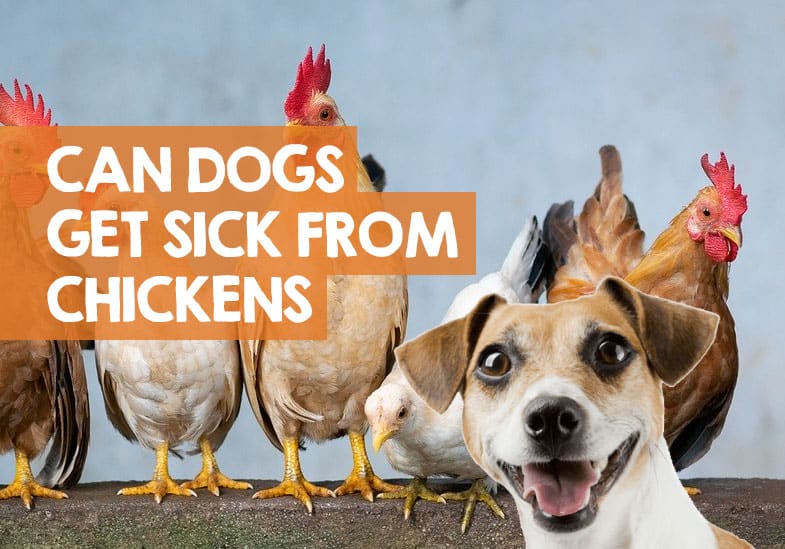 As someone who lives in the countryside, plenty of our friends and neighbors keeps a range of animals, with chickens and dogs being a popular combination. But anyone keeps animals of different species in close proximity should always be aware of any health risks – in this can case whether chickens can make your dog sick.

In this helpful guide I will explain how dogs can be sick from being around chickens. Whilst the risks are comparatively low, there are still things you need to be aware of as a dog owner regarding chicken feed, feces, and possible disease or contamination.

But first, the short answer as follows:

Can dogs get sick from chickens? Dogs will not get ill simply from being around chickens as cannot contract avian bird viruses. However, there are some cases where diseases can be transmitted between chickens and dogs, for example fecal contamination and fungal infections.

Can dogs get disease from chickens?

It is possible for dogs to get sick from chickens with various diseases that can pass from chicken to dog and vice versa. Most illnesses will be passed between the species when a dog eats chicken poop, but there are other scenarios which could spread disease too.

For example, germs and disease can be passed through the air, being inhaled by your dog when near a chicken coop. But this is very rare, and in truth, providing your chickens and hens are healthy, it’s unlikely that chickens can make your dog sick.

But there will always be a small element of risk, as chickens can give dogs diseases providing the environment and circumstances align. Here are some of the ways in which chickens can make your dog sick, albeit rare.

Can dogs get Marek’s disease from chickens?

Marek’s disease is one of the most contagious diseases found in chickens, named after József Marek, a Hungarian veterinarian. It typically affects chickens from 12 to 30 weeks of age and is something more commonly found in poultry farms.

For most people who have a small number of chickens in a small coop, versus are farm environment, Marek’s disease will be rare according to the Poultry Site.

“The good news about Marek’s Disease is that it is rare in small flocks. Personally, I’ve never seen a case or even heard of anyone I know having a case. It’s nearly completely preventable.”

To conclude, Marek’s disease is not something that can make your dog sick form being close to chickens (or turkeys).

Handy Hint: I also wrote a guide on how to introduce chickens and dogs to help reduce the risk of them not getting along.

Can chickens give dogs parvo?

Given that chickens can get parvovirus, it stands to reason that they can in-turn pass parvo onto dogs. Parvo is extremely contagious and typically passes through feces.

Therefore, if you have unhealthy chickens who have parvo, and your dog eats the poop, your dog could get parvo from the chickens.

I do not have any scientific evidence I could find online that backs up my assumption but seeing as parvo is something dogs can contract from eating feces, it sounds likely they could contract parvo from chicken poop too.

Can dogs get salmonella from chickens?

Salmonella is one of the more common illnesses and bacterial diseases that is possible for dogs to catch from chickens. Dogs can get salmonella from chickens when eating the infected feces and droppings around a coop or run.

According to the WagWalking.com websites, chickens with salmonella make dogs sick by:

“Dogs can get Salmonella infection from chickens and other animals carrying the bacteria, by exposure to contaminated excretions (mostly poop!) or by eating contaminated meat.”

In addition, the Scoop from the Coop website says:

“When keeping dogs and chickens it is important that you don’t give the dog free run of the coop or main housing area. This is mainly due to the fact that ingesting some germs that may be present in your bird’s droppings (think salmonella) could make them sick.”

Of all the possible reasons for dogs getting sick from chickens, salmonella is probably the number one risk.

Can chickens give dogs worms?

Many worms are passed out through fecal matter, so if the chicken is infected with parasites such as hookworms, roundworms, and tapeworms, and the dog eats the poultry feces, there’s a risk of illness.

Can dogs get giardia from chickens?

Dogs can get giardia from chickens, primarily through the ingestion of feces. The Centers for Disease Control and Prevention website says this about this particular disease.

There is also documented evidence of dogs contracting giardia from playing in dirt and earth where the parasite is present. This presents the possibility of a dog getting sick when playing near chicken coops – if the chickens have giardia of course.

Handy Hint: Here’s a guide to follow if you want to stop your from killing chickens.

Most dogs will eat anything that they come across and this includes the feed you give your chickens. I also wanted to investigate whether there was a risk of chicken feed making dogs sick and it turns out that is unlikely to make them ill.

Unless the feed has medication in it, your chickens’ food probably won’t harm your dog. Here’s another quote from the Scoop from the Coop website on the matter:

“The un-medicated food that you feed your chickens likely won’t cause any harm to your dog unless they eat a huge amount of it. If you are using a medicated food for your chickens, the medication is not approved for use for dogs. The tougher chore will be to keep your birds away from your dog’s food. This food is high in protein and often becomes a flock favorite once they discover where the food bowl is kept!”

Can dogs be allergic to live chickens?

I found some great information on the VCA animal hospital website which mentioned how dogs living in close proximity to chickens can develop allergic reactions in certain circumstances. Here’s what they say:

“Aspergillosis begins when susceptible dogs inhale mold spores often found in compost piles, stables, and barns. In some dogs, the spores trigger an allergic reaction. In others, the spores cause an infection. Most infections localize in the nose, while some dogs develop mild to serious lung infections.”

As you can probably imagine, this fungus will develop in damp chicken pens and coops, so could be the cause of an allergy in your dog.

Another fungal pathogen that could put your dog at risk is histoplasmosis – again it can be found near chickens as it grows in soil made rich from chicken poop.

To wrap things up, if your keeping a small number of chickens in your yard or garden, then it’s very unlikely that your dog will get sick from being close to them.

The key here is to keep your chickens healthy and keep their coop and run clean and disease free. By doing so, you can help reduce the slim risk of a dog getting a disease from a chicken.

If your dog does really like the taste of chicken perhaps you should just peel the batter off some nuggets for them?

Dogs eat the strangest things, and can get ill for a wide variety of reasons. Here are some of the oddest ones I’ve researched this year: