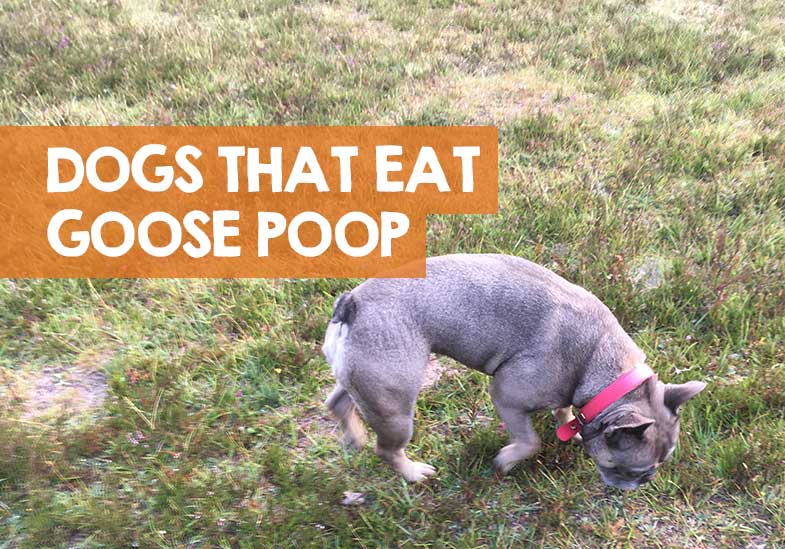 Dogs will eat the strangest of things. Not all are things that you would immediately think could be edible let alone appealing… and none less so than goose poop! However, if you take your dog on a walk near where gooses hang out, you won’t fail to notice this unusual interest in geese droppings.

From what I have researched, dogs eat goose poop more as puppies and will often grow out of it. However, some will continue to be attracted to eating goose dropping into their adult years. It’s not particularly nice, and there can be some potential risks to it, albeit slim – and I will explain why it can be bad for your dog further down the page.

In this helpful guide I will explain to you why dogs like to eat goose poop, and how you can take steps to stop them doing it. But first up, here’s a very quick answer to your question.

Why does my dog eat goose poop? There are many reasons why dogs like to eat goose poop, with the simplest explanation being that they like the taste and smell of the geese feces. However, some dogs will eat goose dropping due to a medical condition or due to a lack of nutrients in their diet.

Is it unusual or common?

The medical term for poop eating is coprophagia (see definition) and it’s actually quite common in dogs. In that a research team led by Dr. Benjamin Hart at the University of California published a study in 2012 that found:

“Frequent stool-eaters comprised 16% of the dogs in the study. They were more likely to come from multi-dog households and tended to be greedy eaters. Intact males were less likely than neutered males or females to be stool eaters. Stool eaters were one-third as likely to eat their own stools compared to those of other dogs, and the behavior was overwhelmingly concentrated on fresh stools.”

So, if you do have a goose poop eating dog, it’s certainly not that unusual. To break things down further, here are all the possible causes why your dog is goose droppings, and after that, some ways you might be able to stop it.

You would think that geese droppings and poop tastes bad. For us maybe so, but definitely not for dogs!

Other animals’ fecal matter has many appealing attributes such as how it smells, the texture, and the taste… all of which far outweigh any consideration a dog has that it’s fecal waste.

Poop, and in particular goose poop is rarely unpleasant to your dog as it has a smell that will attract them whilst our exploring on walk. In fact, you will probably see your dog actively seeking out goose poop to eat.

This is particularly relevant when you consider what geese eat; it’s things like roots, shoots, stems, seeds, grass, grain, bulbs, berries, and insects – all things you’ve probably seen your dog eat before.

Put those ingredients into one neat and smelly little package, and you have something that resembles a dog salad!

A reason why puppies eat goose poop can often be attributed to investigative and scavenging traits. Young puppies will put things in their mouth to find what they are; you see the same behavior with human babies.

In the majority of cases, puppies will stop poop eating for this reason by the time they reach 9 months of age.

3. To replace nutrients or an enzyme deficiency

Dogs can also like to eat goose poop if they don’t have enough nutrients in their system or have an enzyme deficiency. But what does that have to do with goose droppings I hear you ask?

Well, the poop of other animals, particularly those that graze will be rich in enzymes and partially digested proteins. You see this behavior a lot in the animal kingdom where creatures eat the droppings of different species. Here’s a quote from the American Kennel Club website about the matter:

“For some species, such as rabbits, eating fecal droppings is a totally normal way of obtaining key nutrients. In fact, if you prevent rabbits from doing this, they will develop health problems, and young ones will fail to thrive.”

Dogs have this same innate instinct.

Often dogs will eat goose poop as a form of medication.

For example, dogs with parasites will often turn to poop to try to medicate themselves. Parasites will leach nutrients from your dog, and your dog might think it can replace those nutrients via goose poop, which will often be high in it.

There’s another instinctive possibility for goose poop consumption worth considering, and that’s the eating of feces to protect the pack. In the 2012 study I referenced earlier, the researchers said the following:

“Eating of fresh stools is a reﬂection of an innate predisposition of ancestral canids living in nature that protects pack members from intestinal parasites present in feces that could occasionally be dropped in the den area. The only way that wild canids can remove feces before infective larvae hatch is by consuming them.”

The takeout from that statement is that poop eating is in your dog’s DNA, harking back to when their ancestors were living in the wild.

Dried goose poop will look very appealing to your dog. Not only is the smell going to be “off the scale” interesting, but it looks great too and can resemble a tasty snack!

As a dog owner, you will already know how food-orientated they are. Imagine then how tempting it will be to see something that resemble a treat on their walk? You can’t really blame them then for wanting to give it an investigative nibble.

7. Your dog is just hungry

Considering how tasty goose dropping smell, it will be far too much of a temptation for a hungry dog. Consider when the last time that your dog had something to eat, as this could be a driving factor behind him scoffing down droppings.

Is it bad for dogs to eat goose poop?

From what I can find on various vet websites, most dogs won’t get ill from eating a little goose poop. But that doesn’t mean you should let them do it, as in some cases, it can be bad with risk.

For example, there can be traces of salmonella and campylobacter in goose feces. Admittedly that sounds bad, but dogs are said to have quite robust gastrointestinal tracts, so infections are said to be few and far between.

There’s also the consideration that in addition to possible bacterial infections from goose poop, there could also be parasites, viruses, or toxins present.

The bottom line is this; I would discourage my dog from eating goose droppings, as there is always a chance it could lead to a problem, no matter how rare.

You might also want to consider the health hazards that geese dropping present to humans. According to the Goose Busters website:

Sounds nasty doesn’t it, and it’s not something I would like to expose myself to, and there could be a small risk if you own a dog who likes to eat goose droppings regularly.

How to stop your dog eating goose droppings

You will have already considered avoiding any areas with geese, that goes without saying. But if this is not possible then you should consider the following ways to stop it:

And above all, if the poop eating becomes problematic then it could be sign of health issue such as parasites so really needs professional intervention.

If you have any concerns, you should always consult with a vet. The notes in this guide are written by me, a dog lover and not a veterinary professional – everything you read here is based on my own online research and opinion.

What I would say is this though; if your dog’s poop eating appears to be problematic and way to regular to be dismissed, you should call your vet.

From what I have discovered with my own research, a little bit of goose poop in your dog’s diet probably isn’t going to cause them any long-term harm in the majority of cases.

There will always be a risk of illness though, so where possible do try to stop and discourage it from happening – which isn’t always that easy!

Dogs will eat the grossest of stuff, some of which I’ve spoken about before on Doggysaurus. Here’s a selection of some of the more recent articles.