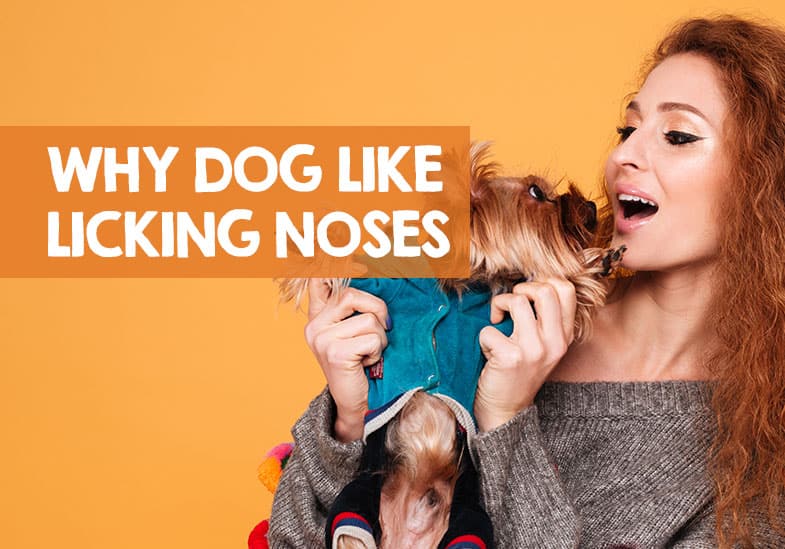 My dog is big on body contact. If he’s not laying on me, he’s pawing my leg. At times, he may give my nose a nibble and rub his nose where he shouldn’t. There’s one thing I hate though, and that’s when my dog likes licking in my nose – just too weird! Is it just another way of showing his love for me?

Why does my dog lick up my nose? Dogs lick up noses as a sign of affection but also due to instinctive behavior. When puppies are born, their mother will lick their nose to get them breathing and to clean them up. The puppies then learn to lick their own mother’s noses. It appears to be learned behavior.

That’s the short answer I found with my own online research. I’ve found out quite a bit more too about why does like licking up our noses – read on for some surprising facts.

Why does my dog lick up inside my nose?

It’s not the first time I’ve been licked inside the nose by my dog. In fact, whenever I hold a puppy they dive for my nose. Just watch other dogs next time you’re walking yours. You’ll notice they’ll even lick up each other’s noses!

1. Dogs lick up your nose because of instinct

All animals are instinctual creatures. Humans are too but we’re just not good at listening to our instincts. Dogs’ instincts drive them to certain behaviors. And one of them is licking up your nose.

From the day they’re born, puppies experience having their nose licked by their mother. She does this initially to clear all the gunk from the birth process and get them breathing. But she also does it to keep them clean.

Puppies, being the instinctual creatures they are, naturally follow their mother’s lead and will eventually lick her nose as well. And the noses of other puppies in the litter.

It’s also been known for puppies from wild dogs to lick their mother’s nose so she regurgitates food for them. This is a primal behavior that can be seen in domestic dogs as well.

Have you noticed how puppies will always go straight for your nose and start licking in it? It’s what they naturally know and do.

2. Dogs lick up your nose because they want attention

Dogs will go to all lengths to get your attention when they’re feeling deprived. One of the ways that works really well is licking up your nose.

I was watching my brother the other day as his dog licked up his nose. He was laughing so much while responding by licking his dog’s nose too!  Who says our dogs aren’t master manipulators?

3. Dogs licking up your nose is a sign of affection

Okay, so your dog may be manipulating you when he licks up your nose. He could also be showing you how much he loves and adores you.

You could say your dog’s licks are like the kisses you give them all over their face. Just because they like to lick your nose it’s simply their way of giving you a kiss.

4. Licking and smelling goes hand in hand for dogs

Licking is an instinctive reaction by dogs. It’s how they “see” and “smell” (although they do use their noses for smelling too). While their human owners may use their eyes to see something, your dog may resort to licking to get a better sense of something.

When your dog smells your face, he naturally wants to lick it too. It’s how they get all the information they want to know. Especially when you’ve just come back home. They’re curious to know everything you’ve been up to.

You see this with dogs who try to lick babies. It’s not safe though, as the saliva can threaten newborn’s immune systems.

You also might find that if you’ve been feasting on a tasty meal, your dog is licking your nose because he can smell food.

He’s going to lick all over your face simply because he’s trying to locate the smell. And he’s hoping to score some morsels along the way!

Licking is what a dog does when they smell with their noses. It somehow improves the smells and relays back the information they need.

5. Could it be excitement or boredom?

Your dog could be licking your nose because he’s so excited to see you. You’ve been away all day and as you walk into the house, your dog goes crazy. He runs around in loops, jumps up on you (not so good!) or if you pick him up for a cuddle, he simply can’t stop licking up your nose.

Playing games can also get your dog all excited. He may resort to licking up your nose because he can’t contain himself!

The opposite could be happening too though. Your dog is so bored because you’re lying on the couch and not playing with him. Licking up your nose keeps him entertained until you finally agree to go walkies with him.

If you notice your dog licking other things in a strange manner, for example floor licking, this is certainly time to worry and could be an issue.

If you’re still wondering why your dog licks up your nose, figure out if he only does it at certain times. It could be either of the above scenarios. Once you know whether its excitement levels peaking or boredom driving him to frustration, then you can do something about it.

Dogs will often lick another dog’s nose as a sign of submission. That’s why you see this kind of behavior happening on your walk in the park.

When your dog is licking up your nose, he could be showing his submission to you. And, acknowledging you as the leader of the pack.

If you’re angry or upset, your dog will also try to lick up your nose. They’re trying to calm you down or may even be a bit scared because you’re angry.

Is it bad to let your dog lick your nose?

Is it a good idea to let your dog lick up your nose or your brother’s kids’ noses when they come to visit? Most times, it’s not a problem unless your dog is a drooling Bull Dog, then it could get messy and unpleasant.

However, it can be bad to let your dog lick your nose due to the bacteria present in their saliva, so for me, I’d discourage it.

And if your dog is doing it persistently or doesn’t know when to stop when instructed, then you could have a problem.

Dogs’ mouths are not as clean as we would like to believe they are. Just like the human mouth, you can expect to find bacteria residing inside your dog’s mouth.

The next time he licks your nose, he could be transmitting something not so pleasant to you.

In most cases, actually up to 90% of the time, dog saliva poses no threat to your own body. But, if your immune system is a bit under par, you may find yourself getting sick.

Bacteria from your dog’s saliva can easily enter through the membranes of your nose, mouth and eyes… some dogs will even try to lick your eyes too!

The other danger of letting your dog lick up your nose is them biting your face or the kid visiting your home. What may start off as seemingly innocent licking of your nose, if not properly managed, could lead to nipping and even biting.

How to stop your dog licking up your nose

Often, especially with adult dogs, licking up your nose becomes a learned behavior not based on instinctual behavior. This happens when you “reward” your dog for licking your nose such as by laughing or kissing him back on his face.

When a dog’s behavior is reinforced with acknowledgements, then he’s going to continue doing it. To stop this from happening, you need to stop the positive reinforcement.

One of the ways to do this is by ignoring or walking away from your dog when he licks your nose.

Make sure he’s getting enough attention and love from you. Keep the excitement levels down and the boredom at bay. Use distraction to divert him from your nose.

When all else fails, speak to your vet or call on an animal behaviorist to help you train your dog to stop licking up your nose.

I hate it when my dog licks up inside my nose. Not only does it feel weird, but I’ve seen what else my dog licks and puts in his mouth… so it’s a no from me!