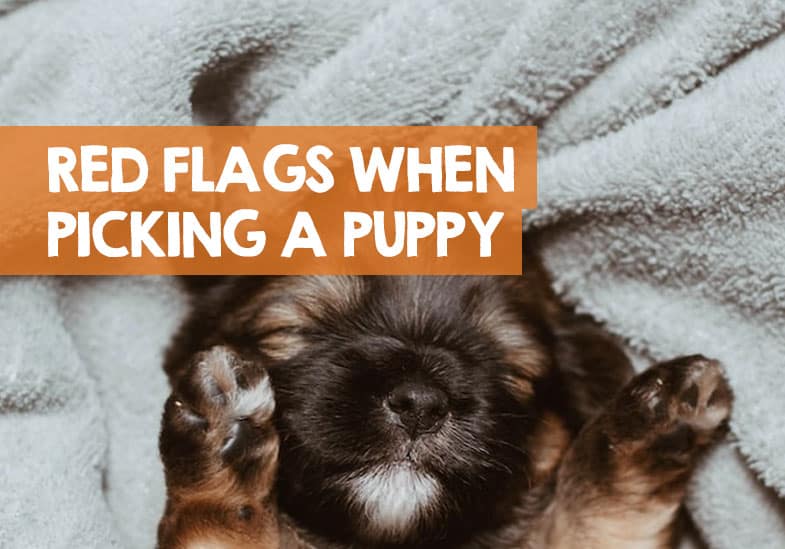 If you’re planning on getting a puppy, it’s easy to get caught up in the excitement and miss the red flags during the buying process. By that, and don’t just mean red flags about the breeder, but also the puppy you are considering.

In this guide I will first explain the red flags when picking out a puppy from a litter, then follow that with red flags about a breeder. That will give you a solid base on which to pick out a puppy.

Red flags when picking out a puppy

Before I talk about the breeders, a quick note on runts. The runt of the litter is not necessarily the smallest, and it’s not always bad to get what you perceive to be the runt. Some will say the runt is more aggressive – here’s what I’ve discovered.

Watch out for these 9 red flags when buying puppies

There are several warning signs you should pay attention to when picking out a puppy. This includes a seller who only wants to communicate strictly via email, is quick to ask for a deposit, has no health records, and doesn’t ask you questions, among many others.

There’s a lot you need to know. Read on as I talk about all the red flags you can’t afford to ignore when picking out a puppy because the worst thing to happen will be it becomes a hospice puppy or you regret the homing.

Scammers know that most aspiring puppy parents are often eager to own a puppy and tend to overlook the red flags.

If you’re not cautious, an ingenuine breeder will swindle you of your hard-earned cash or sell you a puppy with too many issues hidden in that gorgeous little body.

So, what are some of the red flags when picking out a puppy?

You have reasons to be suspicious if the breeder you’ve found online only wants to keep communication strictly via email and dismisses your requests for a phone or video call.

Most scammers — including illegitimate breeders — like to hide behind emails. That’s because they can quickly research answers to your hard-hitting questions and cook satisfactory responses to appear “knowledgeable” and “legit” before your eyes.

But if you ask them those questions via a phone call or video call, they will likely mumble — and it will be obvious they aren’t as legit as you thought they were.

This is a huge red flag when picking out a puppy.

Also, a breeder who’s against video calls probably doesn’t have your dream puppy, so they have nothing to show you.

Remember, pictures alone can’t confirm that a breeder is genuine. Anyone can get adorable photos of your preferred breed online and send them to you via email.

So, if a breeder insists on no video calls, take that as a giant red flag.

2. No proof of puppy yet asks for a deposit

Another red flag is a breeder who’s pressuring you to make a deposit without showing you they have the puppy you’re looking for (through a video call). Or a breeder who isn’t okay with you making a site visit (and not giving you a good reason) before putting down a deposit.

Yes, I know. Some legit puppy breeders ask for a deposit to put you on a waiting list. But in this case, there will be a puppy contract involved. This contract will specify the terms and conditions of your deposit.

And if you wish, the breeder will allow you to visit them and check out the soon-to-be dog mom carrying your dream puppy.

If the breeder you’re engaging mentions nothing to do with a puppy contract but insists on a deposit, run for the hills. Else, you’ll end up paying for a non-existent puppy.

3. No questions for you

Think twice about picking a puppy from a breeder who’s got no questions for you as the puppy’s potential caregiver.

You see, legitimate breeders put the interests of their puppy above everything else. They aren’t too eager to release their puppy to anyone who professes their love for it.

A genuine breeder will ask you questions to gauge how well you can care for the puppy — this can be via a video call or face-to-face as you check out the puppy. Others may send you a questionnaire.

If a breeder doesn’t take time to question you, that’s a big red flag when buying a puppy.

Found a breeder that’s honored your request for a site visit? Great!

Not so fast, though. You should pay attention to how clean the puppy’s environment is and whether the mother and her puppies are visibly healthy.

The mother should look well-settled and happily interacting with her puppies. If you notice their environment seems dirty and foul-smelling, that’s a serious red flag.

The puppies should also not exhibit any unusual signs. For instance, redness on their skin, excessive discharge from their eyes or ears, and red gums.

If you pick a puppy whose physical health raises eyebrows, you’ll be making a costly mistake.

Any legitimate breeder should have a health record of all their puppies.

The records will tell you all you need to know about your dream puppy — whether they have a genetic condition or any health issue, their vaccination schedule is up to date, and other important health details.

Never, ever, buy a puppy with no vaccinations.

Walk away from a breeder that gives excuses when you ask them for the puppy’s health records. Or if the records have many inconsistencies that awaken your gut feeling.

I’ve heard of shady breeders who work in cahoots with quack vets to hide some puppy health problems. If a breeder doesn’t agree to you taking the puppy to your preferred vet for a final checkup before buying it, that’s a big red flag.

When deciding on your dream puppy breed, you must have researched the average price and determined how much it would cost you (roughly).

If a breeder’s price seems too good to be true, tread carefully.

There’s no way a legitimate breeder would sell a high-quality puppy at an absolute rock-bottom price — especially if the price is way below the average market price.

And if they do, they probably know that the puppy has hidden health issues, and you’ll spend the better part of your puppy parenting journey at the vet.

7. Puppy too young to be sold

Avoid picking out a puppy that’s below eight weeks old. A puppy should spend at least eight weeks with its mother and littermates since this is good for their development — particularly their personality.

If a breeder wants to sell you a puppy that hasn’t hit eight weeks old (the records will show) or is staying on their own without the mother and littermates, don’t pick that puppy. They will be too shy and fearful, and you might regret your decision later.

Reputable breeders often issue a contract that covers many things, including what the buyer should do if the puppy doesn’t turn out to be what they wanted and how the breeder will intervene in case of any serious puppy problems.

Experts say legit breeders usually include a “return-to-breeder” clause in their contract.

While looking for your dream puppy online, avoid engaging breeders who seem to have puppies on sale every other day. This is a red flag that they are overbreeding, or have multiple scam ads.

It’s also best to avoid breeders that don’t specialize in breeding a particular breed (they’re always advertising any breed under the sun). Such a breeder likely lacks expert knowledge of your dream puppy.

Some breeders confidently say they “always have puppies in stock for sale.” There’s a good chance that such a breeder is overbreeding their dogs, which can lead to puppies with serious health problems.

What to look for in a puppy when picking it out

As discussed earlier, look for a puppy that appears to be in great physical health, is interacting with its mother and litter in a clean environment, and is over eight weeks old.

Should I pick the shy puppy?

It’s best to avoid picking a shy puppy, as you will have to invest more time and money to train them to become confident. If this isn’t a sacrifice and commitment you’re willing to take, don’t pick the shy puppy.

Puppies are the cutest cuddly companions ever, dish out unconditional love, and know how to brighten your day with their crazy antics. Having a little waggy-tailed friend around will change your life in remarkable ways.

And guess what? We aren’t the only ones who know how precious puppies are.

Understand the red flags and you should get a lovely pup.

Puppy photo in header from https://unsplash.com/photos/m8v7BDLV8yE