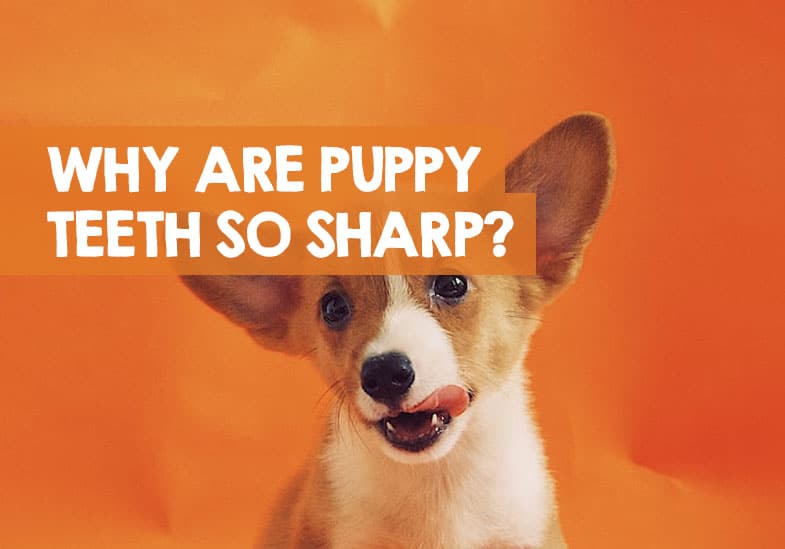 If you’ve ever been bitten by a puppy, you will know how sharp their teeth can be. Given how much thew chew things, you’d think they’d be blunter, but unfortunately not. Here’s why puppy teeth are so sharp, and what to expect over the next few months.

Puppies have sharp teeth to help them in their weaning journey since their jaws aren’t fully developed. Puppies’ sharp teeth also emerge as part of a puppy’s growth and natural socialization process.

There’s a little more to it than that though, including how long puppies’ teeth stay sharp.

“Shark teeth”, “razor-like”, “needle-sharp”, “dagger teeth”, “vampire teeth”. These are some of the popular phrases that puppy owners use to describe their puppy’s sharp teeth.

And quite frankly, that’s exactly how a puppy’s teeth are.

As a puppy owner, you’ll agree that a puppy’s bite can hurt a lot. No matter how cute and playful your puppy’s bite seems, those small, sharp teeth will make you think you brought home a little monster – it’s not wise to let them have a chew!

Every puppy has super sharp teeth. And since they mostly use their mouths to explore their surroundings, they will nip at you, your clothes, and anything they set their mouths on.

But the real question is, why do puppies grow sharp teeth?

The simplest answer to this question is, it’s nature’s plan for a puppy’s development and learning process. There are three good reasons that can explain this “plan”:

1. To help a puppy transition to the next stage of growth (weaning)

Puppies can’t rely on suckling forever. As they get older, they need to start eating solid foods to help them grow bigger and stronger.

That’s what weaning is all about — introducing solid foods to your puppy’s diet while milk feeding for a while (letting them drink formula from the bowl). It teaches them independence.

Weaning is essential to a puppy’s development, and it can’t happen if a puppy’s sharp teeth don’t erupt.

You see, all puppies are born without teeth. During the early weeks of life, they must breastfeed since their mother’s milk has special nutrients and antibodies that a newborn puppy needs at that stage in their life.

Did You Know? It is possible to roughly estimate the age of a puppy by their teeth.

As a puppy grows older, they need to move onto the next phase of development — from breastfeeding to weaning.

Naturally speaking, a mother dog can tell her young one is ready for weaning if she feels any teeth brushing against their teats during breastfeeding.

These sharp teeth often emerge at around three weeks. A three week old puppy will likely bite their mother as they suckle, prompting the mother to push them away.

Once a hungry puppy realizes their mother won’t let them suckle, they will have no choice but to try out other foods.

In other words, a puppy’s emerging sharp teeth is nature’s way of indirectly encouraging the mother to release her little ones into the weaning world.

As much as a three-week puppy is old enough to start eating solid foods, they’re still at a point in life where most of their physical features are underdeveloped — like their jaws, for instance.

Adult dogs can comfortably chew and crush hard foods because of their well-developed jaws and teeth.

But since puppies have underdeveloped jaws, the sharp teeth erupt to compensate for the inconvenience of not having strong jaws. These razor-like teeth help them chew solid foods much better throughout their weaning journey.

If they had ordinary, blunt teeth, it would be harder for them to chew foods with different textures during weaning. The sharp teeth grow naturally to cater to your puppy’s weaning needs.

3. For the sake of natural socialization training

When a puppy enters this world, the first family they know is their mother and littermates. That means your puppy’s first-ever socialization experience was when interacting with their mother and siblings.

If you’ve ever observed a litter of puppies, you know that their interactions often revolve around play fighting with their sharp teeth.

Puppies grow sharp teeth naturally to help them learn what’s acceptable when socializing with their canine family and what’s not.

Here’s how this normally happens:

Unfortunately, all they naturally learn is that puppy-to-puppy biting isn’t right — not puppy-to-human biting. It’s up to you to teach them that biting humans is inappropriate.

Puppies’ teeth tend to stay sharp until they are 12 weeks old, or three months. There are good reasons why puppy teeth are so sharp until this point in their lives.

Here’s how that journey works…

Once a puppy hits three weeks old, the sharp but temporary puppy teeth start growing. These teeth go by other names — milk teeth or deciduous teeth (to mean they’ll eventually fall out).

By the time they turn six weeks old, they’ll have a full set of sharp puppy teeth — 28 of them! These natural mini weapons consist of:

Sharp puppy molars don’t grow since a puppy is still too young to eat hard foods that require much grinding.

When your puppy reaches 12 weeks, they will begin to shed off the sharp teeth. The shedding happens as the erupting adult teeth push the sharp puppy teeth out.

You may randomly find teeth lying on the floor when cleaning. Most times, puppies end up swallowing these teeth — this is normal and won’t cause any harm.

So, your puppy’s teeth will remain sharp until they turn 12 weeks old (three months).

How can I make my puppy’s teeth less sharp?

It can be a nightmare putting up with the painful bites. But don’t even think about pulling out these sharp teeth or trying to make them less sharp — no matter how loose they seem.

Trying to make your puppy’s teeth less sharp won’t work. You’ll only inflict unnecessary pain on your beloved puppy and interfere with their normal teeth development.

And even in this case, it’s your vet who should remove the retained puppy teeth. Not you.

The best way to ensure your puppy doesn’t bite you often with their little sharp teeth is to consistently train them using treats and commands. You should also provide them with various puppy-safe chew toys (view on Amazon)so that they put their teeth to other uses rather than on your skin.

By the time your puppy hits six months old, they will have all their adult teeth — typically 42 of them! These include four canines, twelve incisors, sixteen premolars, and ten molars.

What puppies have the sharpest teeth?

Truth is that all puppies have sharp teeth. There is no evidence showing certain puppy breeds have sharper than others.

Why are puppy teeth shaped weird?

If you mean weird, as in shaped like sharp needles, this is to compensate for puppies not yet having strong jaws. They need sharper teeth to bite and chew with.

Puppy photo in header via https://unsplash.com/photos/9M0tSjb-cpA