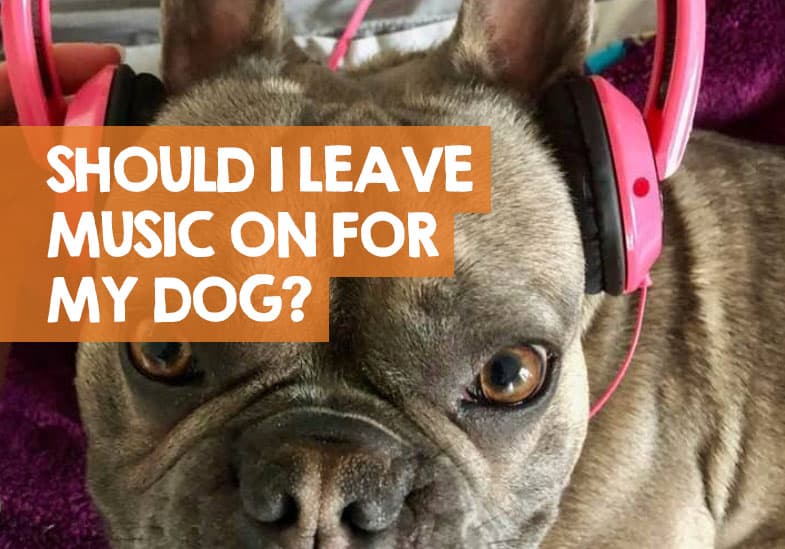 If your dog stays at home whilst you go out for the day, you might be wondering the best way to keep them entertained whilst you’re out. I know I do, so will often leave the TV or some music on the Alexa for him to listen to.

However, it did wonder if this was even a good idea. Just because I like music, that doesn’t mean Claude the dog will. So, what is the right answer, and should you leave music on for your dog at night or when you’re out of the house?

I decided to look at what science says, and present that back to you with my neatly packaged findings. Here’s the short answer first though.

Based on what I’ve found, music is a great idea if you have a dog that suffers with separation anxiety or perhaps one that is scared of fireworks. Music can help calm them and could even drown out scary noises.

I understand that whilst for some dog owners, the solution to their dog being alone lies in the radio, other might be more sceptical.

To help convince you, I’ve laid out the reasons why you should leave music on for your dog, based on me picking apart the science.

Why it is good to leave the radio on for dogs

The relationship between dogs and music is a complicated one, and it is important to do your research before just slapping the radio on and leaving your pup to its own devices.

I wanted to better understand the relationship between dogs and music.

Here’s what I found, and why I now leave music on for dog at night (on a low volume) and when I go out for a few hours without him.

What the research says

Music can help to calm dogs down.

The first study I found was by the Scottish Society for the Prevention of Cruelty to Animals (SPCA). They played different music genres to dogs for 6 hours to see what happened to their heart rate, cortisol and stress levels.

The researched measured the dogs’ responses to 5 different types of music and made some very intriguing observations:

Here’s what a researcher said:

“Overall, the response to different genres was mixed highlighting the possibility that like humans, our canine friends have their own individual music preferences. That being said, reggae music and soft rock showed the highest positive changes in behavior.”

Another study I found on the American Kennel Club’s website found that dogs like to listen to music. But not just any music, with the findings backing up what the SPCA found.

“The dogs listening to pop music showed did not seem to have any type of reaction. The heavy-metal tunes prompted barking and agitation, and the classical music seemed to have a calming effect. It is well established that music can influence our moods; classical music, for example, can help to reduce levels of stress, whilst grunge music can promote hostility, sadness, tension, and fatigue.”

I also found alternative sources of research that said dogs like to listen to classical music, but other studies like the SPCA’s which found this genre raised stress. You might want to leave classical music off your four-legged friend’s playlist just to be on the safe side!

What kind of music should I leave on for my dog?

Now we know that leaving on music for your dog could be a good thing, what type exactly should you be letting them listen to for the most calming results?

There have been countless studies over the years by scientists and dog behaviourists about what genres of music are best for your dog to listen to. Some of the studies into what type of music dogs like best comes down to the pitch of the tunes.

Here’s why pitch is important when deciding what kind of music you should leave on for your dog.

Have you ever wondered why you can’t even hear the sound dog whistles create even though they clearly impact nearby dogs?

The answer to this is simple; dogs’ ears can hear a much wider range of frequencies and tones than human ears can. However, a dog’s ability to process a wider breadth of sounds comes at a price; namely, it their perception of a large range of sounds means that it is more difficult for them to perceive individual notes.

This means that dogs find it difficult to tell the differences between more subtle note and key changes in some kinds of music, which means that some songs or genres won’t be particularly rewarding for them to listen to.

On the other hand, if music is at a pitch dogs understand, you might find them howling along to it. Seeing dogs howl along to music on the radio might seem like a viral fad, but it actually has a very simple explanation.

Because they understand the song’s pitch, they are howling along as a means of communication.

Seeing how their owners react to a song also plays a role in how a dog reacts to it. If you get more animated during certain songs in comparison to others, don’t be surprised if your dog does too in an attempt to mimic the behaviour.

So, it is clear that pitch plays an important role when it comes to choosing the music your dog is most likely to respond to.

But what about the kinds of genres dogs like and, equally, dislike? We will now go through the genres of music for dog owners to embrace and steer clear from…

Research has shown that classical music such as Mozart, Bach and Beethoven can have a positive, calming effect on dogs. If played at a low volume, classical music has been proven to be helpful in getting dogs through stressful situations like storms, fireworks or being left alone for the first time.

However, other studies have proven the effect on classical music on dogs to be transient.

Whilst it may work for a few days, its repetitiveness means that soon dogs will become accustomed to classical music and it will no longer have its desired calming effects, so it is best to use classical music sparingly to relax your dog to ensure optimum effectiveness.

Another surprising study has shown that reggae and soft rock are both popular choices for dogs, with Bob Marley and Fleetwood Mac amongst the names proving to be a popular choice in dog shelters!

So, if the aim of leaving music on for your dog is to specifically make them feel more relaxed reggae and soft rock are your best bet.

In recent years, radio stations, app developers and eccentric musicians have made up a new genre altogether: music for dogs. Dog-specific music takes all the qualities of genres dogs like – such as classical music, reggae and soft rock – and adapt them in such a way that makes them perfect for keeping your dog calm.

Things like the musical note length, tempo, rhythm and the simplicity of tones are all taken into account when making music for dogs, so you can be assured that the music played has minimal potential to either upset your dog or lose effectiveness further down the line.

What music do I leave on for my own dog?

Based on the research I uncovered I put together a playlist of tunes on Spotify then now gets pumped through our Alexa when we go out. If you want to leave music on that your dog is going react well to, here’s a possible mixtape selection.

As you can see, it’s reggae music in the main, but I also put a few classical pieces in there without going too over the top.

What types of music and sounds are bad for your dog?

In contrast to more relaxing musical genres like reggae, soft rock and classical music, studies show that heavy metal rock music can have a detrimental effect on your dog.

The loud noises and tempo changes will upset and distress them the same way other loud noises do and will consequently serve to either raise your dog’s anxiety levels or make them agitated or aggressive if played for a long period of time.

Further to this, if you are leaving the radio on for your dog, you need to be careful that the station doesn’t have too many lengthy segments, interviews or phone-ins. This can cause your dog to become confused and agitated, as they might think these unfamiliar humans are nearby.

To conclude, you should leave music on for your dog if you think they need to be kept calm and relaxed. Playing relaxing music for your dog can be useful in a variety of contexts.