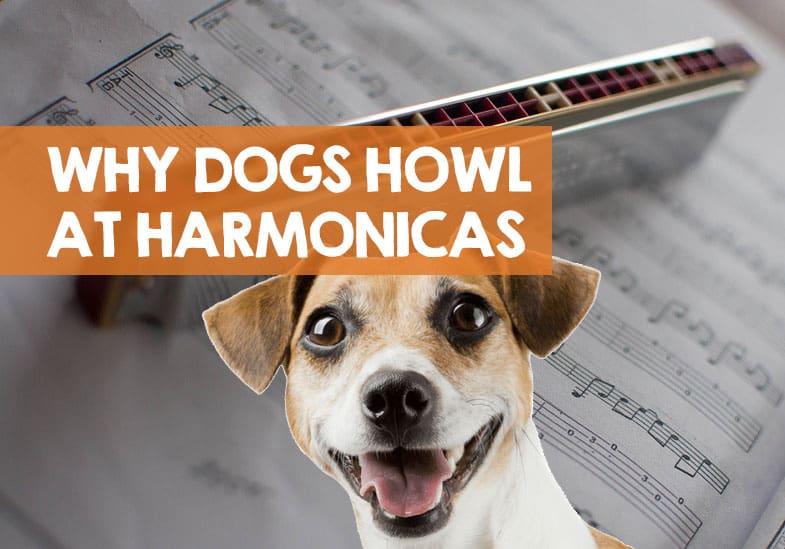 Most of the time your dog will howl because it’s their form of communication, although some people say it’s how dogs sing. I am not entirely sure about that one. One thing that is for sure though, is how dogs will howl when musical instruments are played.

Some musical instruments are more likely to set your dog off howling. These include the clarinet, a saxophone, and even the harmonica. They’ll even howl to certain music being played on the radio or television. But back to harmonicas making dog’s howl… what is it about this particular instrument?

Why do dogs howl at harmonicas? Your dog howls at harmonicas possibly due to wanting to mimic the noise or communicating. Dogs are triggered by the sounds created on reed instruments including the harmonica. They will then howl to join in and singalong with the sounds.

Howling is a form of communication and the dog is responding to the sounds being made by the harmonica. A dog is able to hear high frequencies and the harmonica produces a range of tones and pitch.

Read on to find out more about dogs howling when the harmonica comes out to be played. I’ve also shared some tips on how to stop this noisy form of communication especially when you’re trying to enjoy your harmonica music.

Why does my dog howl?

Howling is a typical doggie trait. They don’t do it all the time but certain sounds or other reasons can set them off in making this woeful noise. This trait can be traced back to their ancestor, the wolf. We’re all familiar with that imagery of a wolf howling at the moon!

Wolves use howling as a form of communication with each other. They do it to let other packs know they’re in the area. The wolf will also howl to warn off other animals trying to take over their territories. A wolf will howl to bring together his pack and to ward off predators.

This behavior is part of your dog’s genetic make-up and often, he or she will respond to another dog howling in the neighborhood because of this instinctual drive. All he’s doing is communicating with the other dog.

Dogs will also howl because:

If you’re unsure why your dog is howling, then take him to your vet for a checkup.

Why does my dog howl at the harmonica?

A certain pitch or tone can set off your dog’s howling which is why the harmonica often gets a dog baying for the moon. He’s responding to a certain frequency which tells him he needs to respond.

And, one of the ways your dog is going to respond to all those sounds coming out of the harmonica is by howling. His natural instinct has kicked in and he needs to talk. Different sounds produce different responses from your dog.

Dogs will respond in different ways to different types of music. They may start barking madly if you get the heavy metal band going or they relax and go to sleep when classical music is played. They’ll howl when wind or reed instruments are played. This includes the harmonica.

Handy Hint: People often ask me whether it’s a good idea to leave music on for their dog when they leave the home. Here’s what I think and why.

Does the sound of the harmonica hurt a dog’s ears?

Does howling mean your dog is in pain or unhappy? Not necessarily. Watch your dog the next time you play your harmonica. Does his body look relaxed even though he’s howling? If his body is not tense and he looks almost joyful while howling, you’ve got nothing to worry about. He’s simply singing along.

If you notice your dog heading for the door to escape the minute you bring out the harmonica, it would be safe to say he’s not enjoying the sounds at all.

But, dogs can pick up much higher frequencies than their human-friends. Most times it’s not painful or damaging for their ears but some pitches may upset your dog. If he starts to whine (which is different to howling) when you play the harmonica, it could mean your dog is feeling anxious.

Tips to stop your dog howling at the harmonica

Sometimes, it can be cute when your dog starts to howl along with your harmonica playing. However, when it goes on for too long, it takes away the pleasure of listening to the music. Your neighbor also won’t appreciate a howling dog for too long.

Here are some tips to help you stop your dog from howling every time you start playing the harmonica.

1. Give him the right attention

Our dogs are geniuses at finding ways to get our attention. They’ll bring their favorite ball to you for a game of fetch or hang around their leash until you take them walking. Dogs will even develop bad habits such as nipping your nose to get your attention.

But how about howling at the harmonica? Is he doing it to get your attention? Yes, it could be one of his sneakier (but noisier way) of getting your attention. If this is the case, then you can choose to ignore him or remove him from the room whenever you play the harmonica.

2. Don’t encourage him whenever he howls

When a dog starts to howl, it often gets his owner laughing. See how it works for getting your attention? A dog howling can look quite funny especially when he’s enjoying himself. So, if you’re laughing every time he howls, you’re encouraging this behavior.

The next time he howls at the police sirens, the dog next door (who’s howling), or when he’s seeking attention, ignore him. Walk away from him and pretend you don’t hear anything. The more he realizes he can’t get a response from you, the less likely he’s going to feel encouraged to howl.

3. Bring in an animal behavorist

Through training, your dog could learn that howling whenever the harmonica comes out is not acceptable behavior. Positive reinforcement with treats is often used with this kind of training.

4. Keep your dog out of the room

Removing your dog from the room whenever you start playing harmonica could be a solution. However, remember dogs have very good hearing and they’ll hear the harmonica even if they’re outside or in another room.

But, you could experiment and see if it works. If it doesn’t and you seriously can’t solve the problem any other way, you may need to soundproof your music room.

Are some dog breeds more prone to howling?

If you own a Basset Hound or a Siberian Husky, you may end up with a dog who loves to howl whenever you play your harmonica. Some dog breeds are more prone to howling and these include the following:

With these dog breeds, a bit more effort may be required to get them to stop howling whenever you’re playing harmonica music. The other option is to accept your dog is simply singing along with you.

If you enjoy playing a musical instrument you might have noticed your dog can howl. Don’t take offense though, it (probably) nothing to do with your playing… you hope.

Bottom line is, harmonicas won’t hurt your dog’s ears much, and he could even be enjoying the sounds you make, however bad they might be!