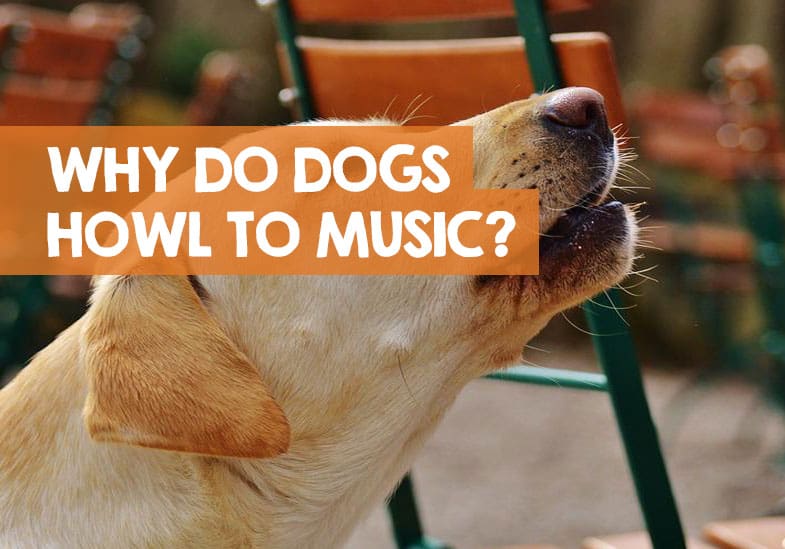 It’s not unusual for your dog to howl when he wants attention. It could also be that he howls and whines when bored, excited, or hungry.

But what seems to get most dog parents puzzled is hearing their dog howl when they hear music… something even certain songs. Yes, they can be that fussy!

Your dog is howling at certain music or songs because there’s something in that tune that reminds them of another dog howling. You dog then whines, cries, or barks to communicate their imaginary dog friend – and they won’t get tired of it as long as the music continues to play.

There’s something about the high-pitched tones in music that set off an instinctive howling response. There’sresearch to suggest that dogs even have a sense of pitch. When there’s a group of dogs howling, they will often change the note to differentiate themselves from the rest of the pack.

There’s more to it though… including what music your dog is most likely to howl to, and what music could calm him down.

Ever heard of a perfect dog-human duet?

Well, that’s what people witnessed in 1968 when the then US president, Lyndon Johnson, surprised them with an impromptu singing performance alongside his beloved dog, “Yuki”.

It all happened inside the president’s oval office. Yuki made himself comfortable on the president’s lap, and as the cameras rolled, President Lyndon went first with an old western folk song, then switched to a classical song (he was badly off key as he sang both, by the way).

All the while, Yuki was already playing his part, making deep, joyful howls as though showcasing his singing prowess to the world!

Many assumed Yuki the dog was seriously enjoying the songs, going by his continuous howling. Others marveled at his singing “talent”.

Truth is, Yuki’s howls had nothing to do with his “talent” or him “having a blast” during the duet performance. And I guess that’s what most of us think whenever we watch those irresistibly cute YouTube videos of dogs howling to music.

If you thought your precious pooch howls because they want to give Adele a good run for her money, sorry to burst your bubble — that’s not it.

Here’s what’s up and why dogs howl when they hear music.

Howling is a communication thing. Besides barking, dogs also say what they need to say to each other through howling. As you may probably know, our canine friend’s ancestry is tied to the wolves. That’s why howling comes naturally to dogs — they inherited this behavior from wolves.

Whenever a wolf in the wild wants to bring the pack together, they’ll howl to alert the rest. And the howling will go on and on until the pack assembles.

Our furry friends also howl to keep in touch with one another. And if you’re keen to listen, just like wolves, dogs’ group howling sessions often involve different pitches. One dog may start with a prolonged, high-pitched howl. Another might go easy on the howling. And so on.

In other words, it’s like each dog opts to start and end their howl on a different note.

Now, back to music.

If your dog howls when a certain song plays in the house, when you sing, or when you’re making music with your piano, guitar, violin (or any instrument you love), there are three main possible reasons behind the howling:

Research shows dogs can sense and react to pitch sounds in music.

Your dog’s howling instincts will kick in because they’re imagining the high-pitched sounds from music are coming from another dog that’s trying to communicate.

So, your dog will whine at the music continually, thinking it’s “responding” to what the other dog is saying.

Your dog also notices the frequent changes in pitch when a particular song or instrument is playing. One minute the music is in a high pitch, then the next minute, low-pitched sounds take over. These changes go on and on until the music stops.

So, according to your pooch, these pitch changes seem like the different pitch sounds that dogs make when a group howling session is happening.

Your dog might be howling to certain music because they think there’s a dog howling session going on, and that they have to participate by contributing their unique howling sound.

Your dog simply doesn’t know the pitch differences are from the music, not from other dogs howling differently.

Let’s just say that your dog may be singing along (in some way) to the music because they’re enjoying the varying pitch sounds and want to participate by making their pitch known.

So yeah, your canine friend can decide to be the four-footed backup singer your favorite musician never had!

3. Or they are uncomfortable with the high-toned music playing

When you make a quick YouTube search on “dogs howling to law and order theme song”, you’ll see many videos like this one here pop up.

As soon as this higher-pitched theme song starts playing loudly, most of the dogs go crazy.

According to experts, the excessive howling observed when this theme song plays suggests that dogs don’t like sounds with an extremely high pitch, which is what this law and order song is all about.

This can’t be far from the truth because we all know how scared some dogs get when they hear an ambulance siren — and one-way dogs express their fear is by howling.

So, it makes sense why your dog might howl louder than usual to music with an abnormally high pitch, like the Law and Order theme song.

It’s not that they’re trying to sing along, but because the pitch sounds are too sharp and freak them out.

Your dog might not howl to certain types of music, experiment shows

Most of us turn to a specific kind of music when we’re in the mood to relax. As it turns out, our canine friends also have a preference.

The researchers observed that the sheltered dogs enjoyed the relaxing effects of reggae or soft rock music because they didn’t howl or bark when songs from these two genres played. They were quiet.

With the other genres, though, the dogs acted restless — standing while howling and barking non-stop. Their hearts also beat faster.

These findings made it clear that the slower tempo in reggae and soft rock music had a relaxing effect on these dogs.

So the next time you play some Christopher cross or Bob Marley, pay attention to how your pooch reacts. Chances are, they’ll have nothing to vocalize.

Your dog’s calm demeanor will be proof that they approve of your playlist!

Why do dogs howl when I play music?

Dogs howl when you play music because the high pitch sounds in songs remind them of the howling noises their canine mates make when communicating. So a dog will howl to respond to these imaginary howling noises.

Why do dogs howl when they hear certain sounds?

They howl because the sounds are high-pitched and are like the high-pitched howling noises they hear from other dogs. Also, they might howl if certain sounds make them uncomfortable.

Why does my dog howl when I play the piano?

Your dog howls because the pitch changes you’re making with the piano sound like the pitch sound changes that other dogs make when howling as a group. They’ll howl to “return” the message.

Why do dogs howl when they hear the guitar?

Dogs howl when a guitar plays because they perceive the high-pitched noises coming from the guitar to be the howling noises their fellow dogs make.

The next time your dog whines, cries, barks, or howls to music, you can laugh it off as you now know he thinks he’s communicating with the pack… you could even leave music on for him to keep him company!