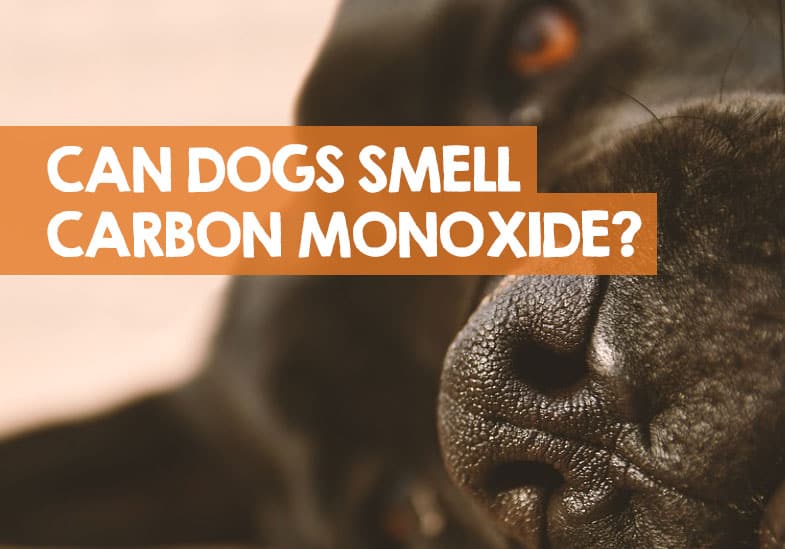 Carbon monoxide is a gas that can rise to incredibly dangerous levels in your home, causing serious harm or death to you, family members and even your pets. As a colorless and odorless gas, it is often difficult to detect when it rises up to dangerous levels.

There’s common misconception that dogs can detect carbon monoxide poisoning, or that they might be more sensitive to the gas than humans. However, this isn’t true, as I will explain now.

Some dog owners think that because dogs have a much more sensitive smell than humans, or some kind of doggy sixth sense, they might be able to smell carbon monoxide and somehow alert us to its presence.

This is not the case.

Dogs cannot detect carbon monoxide as it’s a colorless and odorless gas. It has no smell, so your dog will not know it’s being released into your home at potentially dangerous levels.

This is why it is important to act fast if your dog has strange symptoms (which are listed further down), especially if you don’t have a carbon monoxide alarm (here’s one on Amazon) in your home. By acting fast, you will be able to save both yours and your dog’s life.

Are dogs sensitive to carbon monoxide?

It depends on what you mean by sensitive.

This lack of oxygen in turn leads to severe complications in the dog’s heart and central nervous system. Because of the impact carbon monoxide can have on lungs, your dog may also experience serious respiratory issues and have trouble breathing.

As mentioned before dogs with carbon monoxide poisoning are likely to deteriorate more rapidly than humans, so it is important to get them medical attention as soon as possible in order to ensure their survival.

How you can make your home safer?

If you are wondering how to prevent potential carbon monoxide poisoning in yourself and your dog, here are a few practical steps you can take in order to stay safe:

It is important to be aware of possible carbon monoxide symptoms in dogs, especially since it is hard to tell if the gas itself is present. Although this list isn’t exhaustive, here are some of the most common signs and symptoms to look out for.

Nausea is one of the biggest symptoms of carbon monoxide poisoning not just in animals, but in humans too. If your dog starts vomiting or showing other signs of stomach upset like diarrhoea, it is important to take them to the vet right away – especially if they vomited/had diarrhoea in an enclosed space and you can’t pinpoint any other possible reason why they may have an upset stomach.

Whilst vomiting and other symptoms of an upset stomach are usually nothing serious, it is better to be safe than sorry.

If your dog is usually full of boundless energy, it is completely right to be suspicious if they suddenly seem floppy and vacant. With lethargy also being a symptom of countless serious illnesses out there, getting your dog the right medical care if they’re lethargic can potentially save their life, carbon monoxide poisoning or not.

Dogs suffering from carbon monoxide poisoning often have two very distinct characteristics: red gums and red skin. Whilst the latter might be hard to see due to your dog’s fur, an unusual emergence of redness that can’t be attributed to any underlying skin or gum condition isn’t something to be overlooked.

The faster you catch signs of carbon monoxide poisoning, the better the outcome.

In any case, seizures are a sign that your dog is experiencing a serious medical emergency. Generally, seizures occur as a result of a loss of oxygen to the brain and are a well-known sign of carbon monoxide poisoning. Unless they are in an imminently dangerous environment, it is important to not move your dog if they are having a seizure.

However, if it appears safe to do so, you can move them outside so that they can get more oxygen.

This is usually one of the last symptoms of carbon monoxide poisoning that manifest before the dog collapses, so it is important to take them to vets immediately and, if possible, take them outside so that they can breathe in some more oxygen.

One of the final stages of acute carbon monoxide poisoning, it is important to take your dog to the vets immediately if you find them unresponsive.

Handy Hint: You can read a more detailed guide to print off and keep that explains the signs of carbon monoxide poisoning in dogs, here.

Carbon monoxide is produced when common fuel sources such as coal, oil, gas and wood  don’t burn and break down in the way they should do.

With a lot of household appliances like boilers, central heating systems and cookers relying on these fuels, it isn’t unheard of for carbon monoxide to be produced from these appliances if they are poorly maintained or improperly installed.

Whilst your dog is unable to smell carbon monoxide, their rapid reaction to the substance will definitely serve to alert you of any emergency. If your dog is showing signs of carbon monoxide poisoning, you should evacuate your home immediately and take them to the vets.

Once you know your dog is safe, you should contact a qualified technician to fix the source of the carbon monoxide leak and make your home safe for re-entry.

You should also make time to get yourself checked for carbon monoxide poisoning, even if you aren’t presenting as having any of the symptoms.

Whilst dogs cannot smell carbon monoxide, there are other substances that they really have a nose for including: