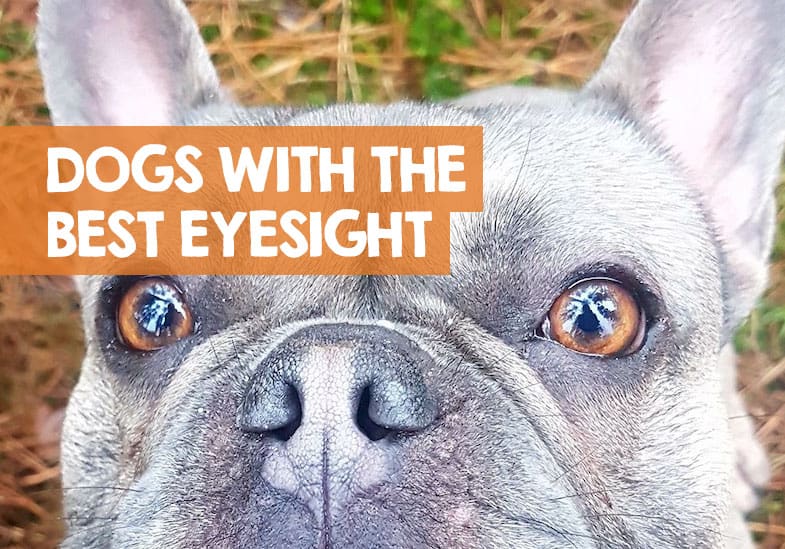 There’s a misconception amongst many people that dogs have great eyesight. It’s not true, as dogs have 20/75 vision compared to 20/20 in humans. And in fact, certain dog breeds have better vision than others. But which dog has the best eyesight?

According to research into what dog has the best vision, Sighthounds have the best eyesight. Any dog that identifies as a Sighthound has better vision than other dog breeds. Sighthounds include the Greyhound, Afghan Hound, Whippet, Irish Wolfhound, the Borzoi, Saluki, Scottish Deerhound, and the Sloughi breeds.

Dogs breeds that are known as Sighthounds have the best eyesight and there are some interesting details about why these dogs have the best vision, much more powerful than other breeds.

Why Sighthound dogs have the best vision

Some call Sighthounds them the “40-mph-couch-potatoes”, and others think of them as the dog version of Ferraris. All because as much as they can hit speeds of nearly 40 mph (and more), their love for cushy sofas never fades away.

If you’re a dog owner to the sweetest and most loyal Sighthound ever, kudos to you for owing one of the oldest dog breeds alive. This athletic breed existed as early as over 5,000 years ago when nomadic tribes would use them for hunting missions.

Any art lover has likely spotted a Sighthound in centuries-old artwork.

It’s not just their unbeatable speed that makes this dog breed famous. Besides being sprinters of the dog world, Sighthounds have the best vision amongst dogs. Way better than what others dog breeds possess.

During historical times, Sighthounds were preferred for hunting because of their extraordinary speed and eyesight. And fast forward to today, a Sighthound’s sight is its most admired sense.

Are you among those dog enthusiasts used to the idea that all dogs only explore their surroundings by their sense of smell? Well, this is true.

But with Sighthounds, things are different.

Just as their name suggests, Sighthounds mostly explore their environment using their sense of sight. This doesn’t mean their smelling skills suck. No.

For as long as they’ve lived, Sighthounds have gone after prey with their sense of sight. Not smell. And even today, their eyesight is their strongest feature (as far as senses are concerned)

A Sighthound’s eyesight is built to fulfill the hunting purpose that this dog breed was initially kept for back in the day. Reason why their sense of sight is way better than other dog breeds.

Let me clarify once again. Sighthounds are dog breeds that use their sight (and speed, of course) to take down prey. They don’t bother using their sense of smell, which is what other dogs rely on.

What Sighthound dog breeds have the best eyesight?

What gives this dog breed such good eyesight

I’ll talk about two aspects that make a Sighthound’s eyesight the best compared to other breeds:

As I mentioned at the top of the article, dog’s vision isn’t actually as good as you might think. They can’t see as far as we can clearly.

The average dog has a 20/75 vision. If your canine companion isn’t a Sighthound, the furthest they can see is something that’s 20 feet away. Yet, for you, you’d easily see this same thing when you’re 75 feet away.

Your daytime vision is much better than your dog’s eyesight since you can clearly spot things from a far distance. All dogs, with the exeption of Sighthound breeds. can’t see that far.

If other dog breeds try checking out something or someone more than 20 feet away, they’d only see a blurry figure.

But night vision is a whole different story. Your four-legged buddy sees better at night than you.

Sighthounds don’t have the 20/75 vision that the average doggo has. Their vision isn’t that limited. It’s much, much better.

Unlike other dog breeds that can’t see past 20 feet, Sighthounds can clearly see anything in front that’s as far as over half a mile away! How amazing is that?

That’s why a Sighthound’s vision is often referred to as “stereoscopic” or “binocular”. They don’t have a hard time seeing distant objects.

Simply put, Sighthounds aren’t near-sighted, as is the case with other dog breeds.

It makes sense why all their hunting missions are always a success. They can spot prey from far away and break into a bolt to secure themselves a meal.

And what makes a Sighthound’s vision that powerful?

According to research, Sighthounds have an elongated visual streak in their retinas. All dog breeds have a visual streak. It’s a part in the retina containing photoreceptor cells (called cones) that support visual acuity during the day.

“We trained and tested whippets, pugs, and a Shetland sheepdog in a two-choice discrimination set-up and show that dogs can discriminate patterns with spatial frequencies between 5.5 and 19.5 cycle per degree (cpd) in the bright light condition (43 cd m-2). This is a higher spatial resolution than has been previously reported although the individual variation in our tests was large. Humans tested in the same set-up reached acuities corresponding to earlier studies, ranging between 32.1 and 44.2 cpd. In the dim light condition (0.0087 cd m-2) the acuity of dogs ranged between 1.8 and 3.5 cpd while in humans, between 5.9 and 9.9 cpd. Thus, humans make visual discrimination of objects from roughly a threefold distance compared to dogs in both bright and dim light.”

In the simplest terms, visual acuity is basically the clarity of one’s vision. This clarity often depends on how many photoreceptors dogs have in their visual streak.

Since Sighthounds have a longer visual streak, that means they have lots of cones (known to enhance daytime vision).

Other dog breeds have a few cones, so there’s no way their overall vision can match that of Sighthounds.

Growing up, were you among those naughty teenagers who’d freak out their younger siblings by telling them you’ve got eyes at the back of your head? That you’re a mini-monster who can see everything behind you?

If you pulled such a prank on a child, you were simply trying to tell them you have awesome peripheral vision (only that you were exaggerating everything). Peripheral vision (others call it “indirect vision”) is what allows us to see from the sides without us turning our heads or shifting our eyes.

Just like humans, all dog breeds have this type of vision.

The extent to which dogs or people can see from the side of the eyes is often described as the peripheral view. Our four-footed buddies are lucky to have a wider peripheral view than us.

And then there’s Sighthounds. They are the luckiest. Sighthounds’ peripheral view goes up to 270 degrees! It’s almost as though they have eyes behind their head to see stuff.

Whatever a Sighthound spots from the corner of its eyes is more than what any other dog breed can. Their exceptional peripheral vision has everything to do with the placement of their eyes. Sighthounds have quite slender faces with widely spaced eyes.

Compared to other breeds, a Sighthound’s eyes are located further to the sides of their narrow head, giving them a better view of what’s happening “behind the scenes”.

Or think of it this way.

If you try to sneak up behind a Sighthound, be sure they’ll quickly turn even before you make the second step. But if you were to sneak up on another dog breed, you’d probably make several steps before they notice you.

Are dogs’ eyesight better than humans?

Do dogs have perfect vision?

It’s only Sighthounds whose vision can be described as perfect. Unlike the average dog, Sighthounds see objects that are far away (over half a mile away).

The furthest other dog breeds can see is just 20 feet away.  Plus, a Sighthound’s peripheral vision stands out from all other dogs.

Do dogs have good eyesight at night?

Yes, that’s correct. Our canine pals see better at night than in the daytime because they have several rod cells in their eyes. These cells get activated when there’s little light, like at night.

Who has better eyesight, dogs or cats?

There is no scientific proof or research I have found that suggests dogs with blue eyes can see better than other breeds.

What breed of dog is prone to eye problems?

Flat-faced, or brachycephalic breeds, such as French Bulldogs and Pugs are more prone to eye problems than other breeds. If you are worried about your dog’s eyesight, here are some tests you can do at home to check for blindness.

When it comes to our four-footed pals and their sense of sight, it’s true that some breeds will have better eyesight than others.