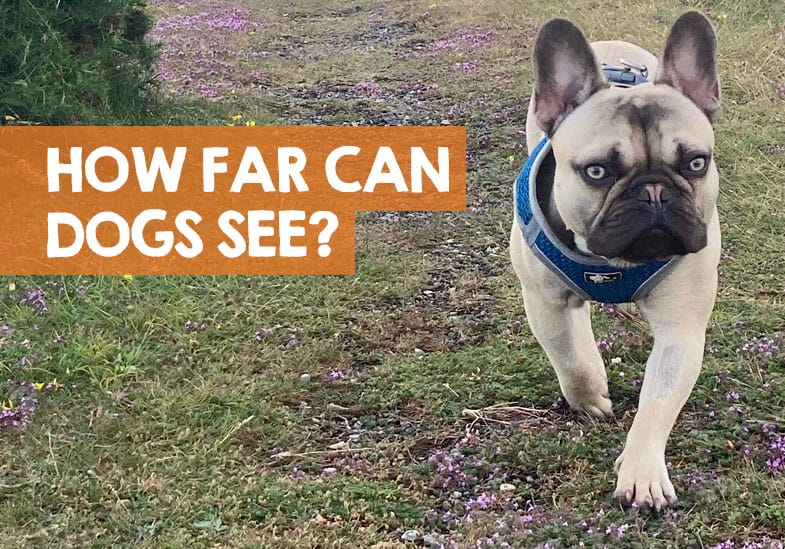 There’s so much hype about our canine companions’ amazing senses. But when it comes to their sight, they need to take a backseat versus humans. Yep, that’s right, dogs cannot see as well as we can, and have comparatively have poor vision.

But that doesn’t mean some dogs can’t see far or in the dark… but just how far is the question here. If you’ve ever waved to your dog in the park when they go too far off leash and notice they don’t quite see you…

How far can dogs see? Most dogs can see as far as 20 feet clearly. Any longer distances than that, and their vision won’t be as good. Anything beyond 20 feet will only appear blurry. Dogs are near-sighted, meaning they can’t clearly see distant objects.

How far can dogs see compared to humans?

In simple terms, your human vision is way better compared to a dog. You have 20/20 vision. Your dog has 20/75 vision. This means dogs can see 20 feet clearly, whereas compared to humans who can see up to 75 feet clearly.

Here’s what it all means and what you can expect from your dog’s eyesight.

Below I’ve collated all the information I can find on how far dogs can see, in the dark, how clearly, or otherwise. I’ve also investigated how wide a dog can see, or in other words, what a dog’s range of vision is.

I don’t know about you, but dogs often remind me of the phrase “you can’t have it all”. And my reason is obvious… we’d expect that since our dogs are famous for their out-of-this-world sense of smelling and hearing, they’d also have a sense of sight like no other.

But reality is that dogs cannot see very far when compared to humans. They quite simply don’t excel in the sight department. In fact, the common acceptance is that their vision is three to five times worse than human vision.

You might be standing on the other side of the road, where you can directly see your dog chilling on your front door. You’ll think they’ll instantly come running to you just because they’re gazing in your direction.

But they don’t, and you end up assuming your dog is probably snubbing you.

Then, as soon as you start walking towards your gate, you’ll see them jumping in excitement to welcome you home.

Why is it that your dog will only see you when you are closer to them and not far away? I mean, if you can see them from wherever you are, they should also see you, right? Wrong.

According to experts, dogs have a 20/75 vision.

“The best set of measures that we have to date on this kind of acuity measure is from a dedicated Poodle, tested in Hamburg, Germany. Still his acuity was quite poor and he was only able to make out patterns that have stripes that are nearly six times wider than the minimum that humans can make out. Converting this result to the more usual measures the dog seems to have a visual acuity of only 20/75. This means that a pattern that a dog can barely recognize at 20 feet (6 meters) is large enough for a person with normal vision to identify at a distance of 75 feet (23 meters).”

Put simply, the furthest dogs can see is anything that’s 20 feet away. Whereas for us, we can see stuff that’s 75 feet far away from us.

Handy Hint: Did you know that dogs can see themselves in mirrors, but won’t understand it’s them staring back.

How far can dogs see clearly?

I’ll use an example to help you understand your dog’s 20/75 vision.

As you continue trekking and your distance from the tree shortens to 20 feet, that’s when your dog will clearly see the same tree you had already spotted several minutes ago.

In short, we are often the first to see an object that’s far away. Dogs, on the other hand, must get a little bit closer to see clearly a distant object (including an animal or a person).

For this reason, dogs are said to have poor visual acuity compared to us.

Don’t feel too sorry for your adorable pooch, though. Their fantastic sense of smell and hearing makes everything easy for them!

What exactly is visual acuity?

When we look at an object that’s 75 feet away from where we’re sitting or standing, our vision isn’t blurry. But a dog’s is. That’s because our visual acuity is stronger than our canine friends.

Of course, there’s a reason behind this.

The human eye and the dog’s eye have what we call cones, a type of photoreceptor cell in the retina. One of the functions of these cone cells is to give a high-resolution vision — that’s why people with healthy eyes can see the finer details of distant objects more clearly.

Research shows that our canine friends have way fewer cone cells than us. Without a good number of these cells, a dog’s vision will be blurry when checking out something that’s far.

Since dogs don’t have a lot of them, they can only see two main colors — yellow and blue (plus the neutral colors, of course: white, black, and grey). So, if there’s a green, red, or orange house 20 feet away from where your dog is standing, all they’ll see is a yellow house instead.

In the context of color, this type of dog vision has a name — dichromatic vision. So, if you thought all your dog could see from a distance was black and white, you’re mistaken.

Although dogs have trouble seeing things from a distance, they are extremely good at sensing motion.

What I’m trying to say is, even if your canine friend can’t see clearly when something is far away, you’ll notice a change in their behavior if that “something” is moving.

If there’s a huge tree several feet away from where your dog is standing, your dog won’t be bothered because the tree is stationary.

But if there’s a raccoon busy digging a hole far away from where your canine buddy is sitting, the raccoon’s movement will catch your dog’s attention — even though they can’t see what exactly is doing the digging.

Like everything else about a dog’s vision, their ability to detect motion (despite not being able to clearly see who or what is moving) also has a scientific explanation.

Remember the photoreceptor cells I mentioned a few moments ago? Cones?

Now, there is another type known as rods, or rod cells. Apart from cones, our canine friends also have rods in their retinas. Lots of them. More than what we have.

Rod cells help in detecting motion. Since dogs have several rods, they can easily sense things moving from a distance — as far as 900 meters!

That’s why you might be playing with your canine friend in the field, and if someone is walking towards where you two are, your dog will suddenly shift their focus away from you. You’ll notice them gazing in the direction your unexpected visitor is coming from, probably trying to figure out who’s the person in motion. You’ll also observe other changes in their body language:

Rods become more active when there isn’t enough light. While we may struggle to see an object that’s 20 feet away at night, a dog will see perfectly fine.

Our dogs might not be able to see far away like us, or far in the dark. They just don’t have the best vision when looking at distant objects straight ahead. Good thing is, they have exceptional peripheral vision — basically what they can see on the sides without having to turn their heads.

Our peripheral vision is around 180 degrees. But for dogs, its much wider — about 250 degrees.

Why is that? Because your canine friend’s eyes are positioned nearer to the head’s sides.

So, the next time you see your dog running after a squirrel you didn’t know was behind you the whole time, that’s their peripheral vision showing off!

Handy Hint: Research has revealed that some dogs have a short-term memory of just 2 minutes, compared to 2 years and up with their long-term memories.

What dog has the best eyesight?

Certain dogs breeds do have better vision, with Labradors, Greyhounds, Rhodesian Ridgebacks, and Basenjis often cited as being dogs with the best eyesight.

In fact, Labradors, which are commonly used by as guide dogs (with good reason), are said to have closer to 20/20 vision, so almost as good as human eyesight.

What dog has the worst eyesight?

Certain dogs breeds are known to be susceptible to vision problems, leading to them commonly being said to be breeds with poor eyesight.

Handy Hint: We’ve compiled a list of tests you can do at home to check if your dog is starting to go blind. If you are concerned, try a vision test then book a consultation.

How far can dogs see at 8 weeks

By 8 weeks of age, dogs will be able to see as clearly as their 20/75 vision will allow. Prior to this stage, newborn puppies open their eyes between the 10th and 14th day of being born.

At this age you will see the eyes start to open, possibly one before the other, taking around 10 days to both open fully. Their vision also won’t be completely clear yet – but it will be at 8 weeks.

What is a dog’s range of vision?

Dogs have a broader and better range of peripheral vision, roughly 250 degrees. This has got to do with how well-positioned their eyes are.

Our canine companions have dichromatic vision. That means they can only see two main colors in objects — yellow and blue.

How far away can a dog sense its owner?

A dog can detect its owner’s movement from as far as 900 meters away.

How far can a dog see in the dark?

Dogs can see as far as 20 feet in the dark because they have several rod cells that support nighttime vision. The average person will struggle to see something that’s 20 feet away at night.

To conclude, dogs can see as far as their limited vision will let them. This means they should be able to see clearly up to about 20 feet away. Any longer distance than that, and their vision will become blurred.

And of course, how far a dog can see at night, will then depend on how much light there is.