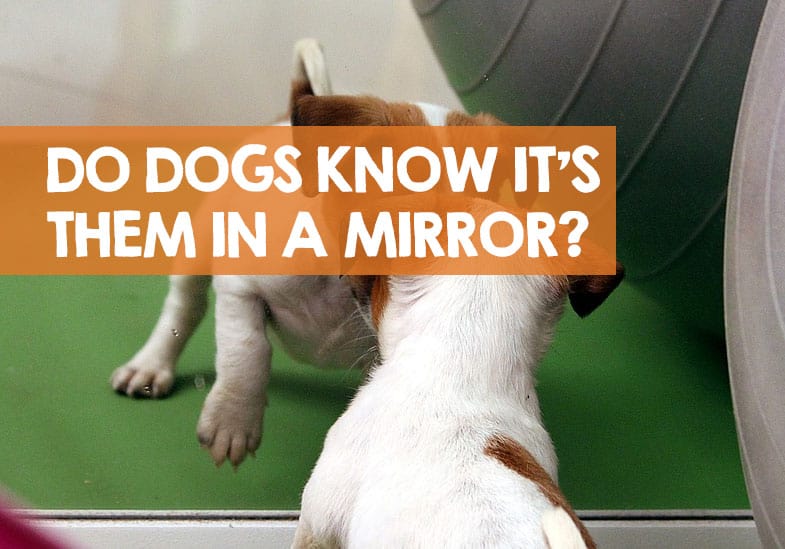 Our kitchen cabinets and are designed with a black gloss finish which show a reflection. Yesterday I caught one of our dogs barking at this dark reflection in the mirrored surface, which amused me on a couple of fronts.

Firstly, the fact he seemed to think another dog was in our kitchen and he was being all protective, but secondly because I’d always assumed dogs recognize themselves in a mirror when they see a reflection… so what is the truth?

But dogs can use mirrors and reflections for other purposes, such as identifying their owners and finding toys and treats. They also seem to be able to recognise their own scent, and on a humorous note, can smell their own farts.

Can dogs see their reflection in mirrors?

We’ve established that a dog can see their reflection in the mirror, but they won’t connect the dots and recognise its their own image in the reflection.

And how your dog responds to what it sees in the mirror depends on other factors, such as age, socialisation, and the environment. Here’s what science suggests (based on this study on Nature.com).

Self-recognition or self-awareness is a complex philosophical concept. A simple test, however, is used to determine whether a subject, human or animal (such as a dog), can recognise itself in the mirror.

It has been shown that plants are drawn to mirrors but not out of a sense of self awareness. They use the reflection from the mirror as an additional light source.

Children up until the age of around 18 months do not acknowledge the person in the mirror as being themselves. They may react with curiosity or friendliness to the ‘other child’ but are unable to process the notion of being the creator of the image’s responses.

If you compare a child of 18 months to a dog, given the child can’t recognise their reflection in a mirror, it’s no surprise that a dog’s brain can’t either.

Incidentally, between the ages of 18 and 24 months, toddlers develop a more accurate perception of their mirror image.

A test known as the rouge or mirror mark test has been used to research this finding. A red mark, that cannot be felt on the child’s skin, is applied to their face or elsewhere on their body that will be visible in the mirror.

An older or more self-aware child will move closer to the mirror to inspect the mark or will attempt to locate or remove the mark on its own body after noticing it in the mirror. This response indicates that the child understands that it is seeing a representation of itself, and not another person.

The same test has been performed on several animal species including dogs to see if they recognized themselves in the mirror. So far, only ten creature types have exhibited self-recognition – but dogs are not one of those animals capable of seeing their reflection and understanding it’s them they are looking at.

Animals that did recognise their reflection in mirrors include some of the great apes, such as gorillas, chimpanzees, and orangutans. Dolphins, whales, and elephants also passed the test. The only birds to recognise themselves using the mirror mark test were magpies.

Surprisingly, one fish species, known as a cleaner wrasse, is also thought to have recognised itself in a mirror.

But back to dogs.

As no dogs have shown self-awareness during test it is surmised that they have too deep a sense of being part of a pack and little notion of individualism. Which leaves me at a loss as to how to explain the behaviour of some of my entitled resident divas.

What do dogs see in the mirror then?

Some breeds, especially those selectively bred and chosen to be seeing eye dogs, have vision that is close to 20/20. But most dogs are short-sighted and have nearer to 20/75 vision.

Their visual ability has been compared to that of an 85-year-old person who cannot find their glasses. This means that dogs cannot see that far compared to most humans.

To compensate for this shortcoming, they do have excellent peripheral vision, and can easily detect movement. Although night vision is often attributed to cats, dogs also see well at night. Their lenses are designed to reflect, and thereby increase, available light.

Dogs are not, as some people think, colour blind. They can see items on the blue, green and yellow part of the colour spectrum but they cannot see the red hues.

Which begs the question: Was the rouge used in the self-awareness tests red, or an appropriate colour for dogs? Surely the scientists thought of this.

Perhaps you can try the mirror mark test at home, using a marker on the yellow / blue spectrum.

Handy Hint: Another interesting topic is how dogs understand (or don’t understand) death.

What happens when a dog sees its reflection?

How a dog responds to its reflection in the mirror is very interesting. Here’s some summaries from the research that has been done to date.

Response to its reflection

What your dog does when it sees its reflection in a mirror depends on the information it receives and the dog itself.

For example, the response to the reflection will depend on the dog’s age, how often it has seen its reflection, how well it has been socialised, and the placement of the mirror.

Why do dogs stare at their reflection?

Initially the dog will see its reflection in the mirror and might stare and be attracted to the movement of the ‘other dog’ in a mirror. Young dogs and puppies may be curious and try to encourage the other dog to play.

Much like Pavlov’s dog, if it does not get the desired reward, it will no longer be motivated to initiate any interaction. After constant exposure to a mirror, your dog will most likely become immune to the stimulus and ignore it.

If your dog has not been socialised or is suddenly confronted by its mirror image reflection in an unexpected place, this could elicit a fright, fight, or flight response. Your dog may be afraid, become aggressive or decide that discretion is the better part of valour and hastily depart the scene.

Your dog may respond negatively if a mirror is placed near its food bowl, or if one suddenly appears in the garden or elsewhere in what is its exclusive territory.

Bears that have unexpectedly been confronted out in the wild, by what appears to be a rival in their territory, become extremely violent and attempt to annihilate the image, along with the mirror.

If you are sure that your dog will not have an adverse reaction to seeing its own reflection in a mirror, you can have some fun. Place two mirrors at right angles at your dog’s level, making certain that they are secure.

Four images of your dog will appear, all behaving slightly differently in response to your dogs’ movements.

Using mirrors to orientate themselves

Observations have concluded that dogs can use mirrors as a tool for processing information. They do recognise their owners or handlers in a mirror, understanding that they are behind them and not in front of them.

They are also able to locate food that is visible only in the mirror. Trials have shown that dogs have double the chances of finding treats when they have the use of a mirror and know how to process the feedback they receive from it.

Another test you can do is to stand behind your dog while it is looking into a mirror. Draw its attention to a toy or treat, without making a sound. Based on visual information alone, your dog should turn away from the mirror toward you and the object of its desire.

Dogs are said to have a sense of smell logarithmically more powerful than that of a human. Which raises another question: Are they responding to the image in the mirror or the scent coming from behind them?

Tests have been done to determine whether dogs recognise their own scent. One diligent researcher tested this theory on one of his dogs.

Each winter, for five years, he collected samples of his dog’s urine from his yard and deposited it surreptitiously on the route they walked together around the neighbourhood each night.

The researcher observed that his dog repeatedly ignored its own scent while showing keen interest in all other scents within range.

The jury is still out on whether the dog recognised its own smell and thought, ‘Ah, this is me!’ or just perceived that its own scent was not a threat or an opportunity for romance and moved on.

The next time your dog stops and stares at himself in the mirror, it’s not because he recognizes his reflection, but because he’s seen something he doesn’t understand. Over time he will get used to it, because he won’t get the response he wants from it.

Dogs do not have the self-awareness needed to recognize themselves in a mirror.