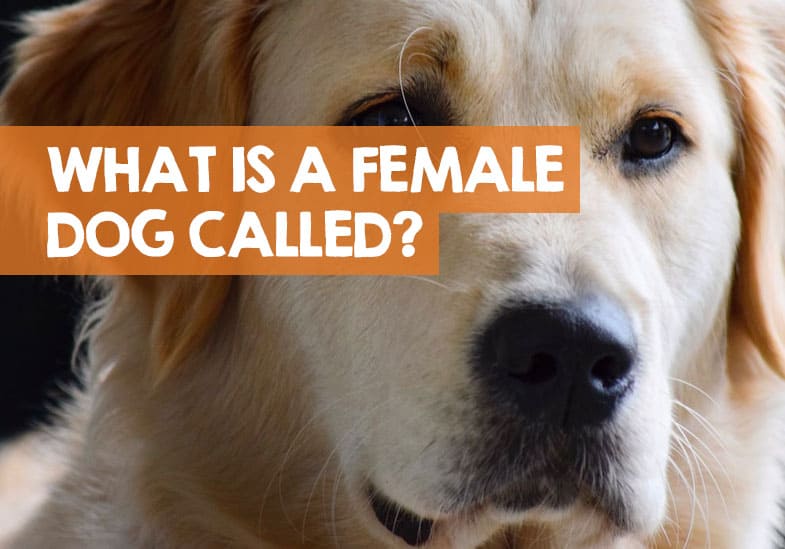 So, what is a female dog called?

Generally speaking, “bitch” is what a female dog is called. This name for a female dog dates back centuries from when the domestication of female dogs began and still applies today. But as you’ll soon see, a dog that’s just given birth has a different name.

Below are some relatively unknown facts about female dogs, including the name given to a mother dog who has had puppies. We’ll also explain about the specific terms used to refer to male dogs, so you’d know how to differentiate the males from the females.

What is the name of a female dog?

Most dog lovers or dog parents call every four-legged furry a “dog,” regardless of whether they are male or female. But like almost all animal species, there are specific names for female dogs to make it easier to distinguish them from the males.

It’s certainly not “she-dogs” or “canine queens” (sounds like the perfect title, though). So, what exactly is a female dog’s name?

The common name for a female dog is a bitch.

While this name hardly pops up during everyday conversations among dog owners, you’ll agree that veterinarians use it without batting an eye. It’s part of their daily language when using the correct terminology for what a female dog is called.

As English advanced, the “Bitch” spelling came into existence.

But in the early 14th century, it shifted to being a popular derogatory slur on women, which is still the case many centuries later.

So, it makes sense why many of us today shy away from calling female dogs bitches. The negative perception surrounding this name for a female dog can make a one-on-one conversation between dog lovers awkward!

On the other hand, a male dog is generally called a “dog.” But this name changes depending on the male dog’s reproductive status, as you’ll see shortly.

What to call a female dog in heat

The heat cycle (or estrus as experts call it) is often a “female-dogs-only” experience. Our male furry friends don’t go into heat. A female dog in heat still goes by the name bitch.

Not all female dogs go through estrus. If you have a spayed bitch, she will never experience heat for the rest of her life…. But can sometimes bleed still.

Spaying removes a bitch’s reproductive organs. So, no sexual organs, no heat.

Several experts agree that this medical procedure should be done shortly before a female puppy hits six months old.

Most female puppies reach puberty at six months. That means their sexual organs have fully developed by this time, and they can go into heat (and get pregnant if they mess around).

There are several health risks that come with carrying a pregnancy at such a tender age. For this reason, a young bitch must undergo spaying before her first heat cycle.

Spaying also saves a bitch from reproductive cancers and other life-threatening reproductive diseases that normally affect unsprayed female dogs — For instance, mammary cancer and pyometra (a potentially fatal infection in a dog’s uterus).

A female dog that is spayed still goes by the name of bitch.

Vulva bleeding is often the most obvious sign that a bitch has entered heat.

She will also display other behavioral changes to show she’s sexually in need. For example, being moody most of the time and trying to escape her home to find a mating partner.

It’s also worth noting that unspayed bitches shouldn’t be bred during their first heat cycle to avoid health complications. Experts often suggest waiting until they’ve at least had their second estrus — which generally happens when a bitch is around 18 months old.

The male mating partner for bitch in heat is called a stud dog.

Put simply, a stud is a male dog that hasn’t been neutered (or castrated), thus suitable for breeding. Since his sexual organs are still intact, a stud dog can impregnate a bitch going through heat.

For a stud to be considered the perfect mating partner, he should tick all the right boxes:

With these qualities (which a bitch also needs to have before mating), a stud dog will produce high-quality sperm when mating. This will ensure a bitch gives birth to a healthy litter with amazing qualities.

What to call a mother dog / what are female dogs called with puppies?

When a dog gets pregnant, she is still known as a bitch. Pregnant bitches normally carry their pregnancy for slightly over two months (roughly 63 days) before giving birth.

An ultrasound or X-ray can reveal the extra number of puppies a bitch is expecting.

A bitch should recieve special care throughout her pregnancy. For instance, she should eat premium dog food to get extra nutrition for the sake of her little ones feeding in the womb.

A pregnant bitch should also engage in gentle but consistent exercises — like short walks — since exercising will keep her muscles well-toned. That way, her delivery experience will be much better.

The entire birthing process for a pregnant bitch is referred to as whelping. This explains why dog parents with expectant bitches are usually advised to prepare a whelping box when their dog’s delivery date nears.

When a female dog gives birth, her title changes from “bitch” to “dam.”  In other words, female dogs with puppies are called dams… aka, female dogs that have given birth and are nursing their puppies are known as dams.

Also, the title of the male dog involved in breeding will change when her bitch finally delivers.

Since the male dog is now a father, the name “sire dog” will be used when referring to this dog’s contribution to the litter’s success. “Sire dog” is only used in the breeding context alone.

And while she is busy taking care of her little ones, you should ensure her whelping station is comfortable and quiet. Doing so will make her feel less stressed, which means she will play her motherhood role pretty well.

Plus, you need to keep a close eye on a dam so that you can contact your vet immediately if you notice anything unusual — like excessive whining, panting, or swollen and discolored teats.

FAQs on what female dogs are called

A female dog in heat is called?

As discussed earlier, a female dog in heat is known as a bitch.

What is a male dog called?

As mentioned before, a male dog has three different names depending on its reproductive status. The general name for a male dog is simply “dog.”

But in the context of breeding, a male dog that’s a potential mating partner to a bitch in heat is known as a stud dog. When he successfully sires a litter, he will be called a “sire dog.”

What is a female spayed dog called?

A female spayed dog is still called a bitch.

Our canine friends are fascinating creatures. There are so many things about them that curious minds want to know, from the complex stuff to the basics — like their specific names.