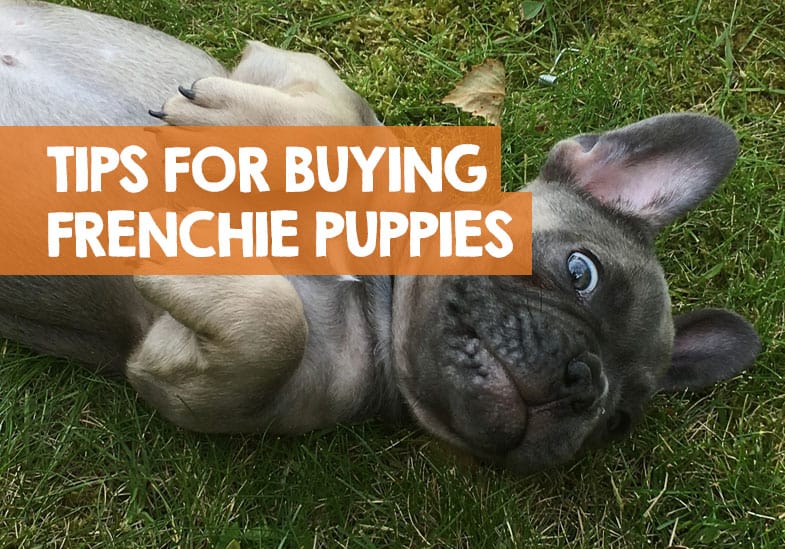 One of the more common questions I’ve seen on social media in recent years is from people wanting to know what to look for when buying a French Bulldog puppy. This question is usually accompanied with wanting a list of questions to be asking the French Bulldog breeder.

Based on this feedback I wanted to give you the ultimate list of questions to ask, plus all the warning signs that should make you walk away. Not just warning sings about the French Bulldog puppy, but also her mother and the breeder too.

Things to know before buying a French Bulldog puppy

The moment you see that adorable French Bulldog puppy for the first time will last with you forever, it certainly did with me when we first met our own dog. You’re bound to find it hard not to completely fall head over heels for them.

But…. Just take a step back for a second as there will be some red flags to watch for.

Yes, you might see one puppy in the litter that you have a particular affinity for, but how do you know it’s the right one for you to take home?

It’s easy to simply say yes, pay your money, and take a French Bulldog puppy home, but in hindsight there’s always thing you should look into.

We didn’t do this when we bought our first ever puppy many years ago. I wish we had, but luckily, our dog ended up being ok, but it could have been very different: French Bulldogs are a notorious breed for health problems and unscrupulous breeders.

With their cute squashed faces and cuddly squat bodies, they will tug at your heart strings. You will be tempted to just take that French Bulldog puppy and go. But please, please, please… before you do that, here are some things you should check before you pay your money.

Here’s my list of questions to ask a French Bulldog breeder when buying a French Bulldog puppy. Read these before you spend the money. By doing this due diligence you should hopefully get a puppy that not only fits your family and lifestyle, but also lives a long and happy life.

I hope you find these questions to ask a French Bulldog breeder helpful. Please do print them off before you visit the litter and decide to buy.

The personality of the French Bulldog breeder

This is so often over-looked, but I wanted to add it on as something to look for when buying a French Bulldog puppy. It’s so important to get a good feeling about the breeder; if they treat you badly and are rude, it could mean they treat those pups badly too!

Only buy a French Bulldog puppy from a breeder who is prepared to take the time to answer any questions and concerns you might have. They should also be happy to give you as much detail as possible about the parent’s history.

Breeders that treat buyers with respect will most likely extend that kindness to the French Bulldog mother and her puppies.

How to buy a healthy French Bulldog puppy

Earlier I explained how you should ask the breeder to show you the parent’s history. This gives you an indication of what health problems could in store.

It’s an unfortunate fact that dogs of a brachycephalic nature such as French Bulldogs, do suffer with some very unique health issues – not always, but the risks are higher. These can include:

As you can see, it’s a very large list, and in truth, I’ve missed some health issues out.

But I hope this at least gives you even more reason than before to make health history one of the most essential questions you ask the breeder when buying a French Bulldog puppy.

French Bulldog puppy health issues you can check yourself

This is one of the most critical sections of what to look for and know before you buy a French Bulldog puppy. Health problems are common, but there are some things you can check, often in the company of the breeder whilst seeing the litter.

Whilst not all health issues will be obvious, there are some which have visible signs. Here’s what you can check for easily:

Is a French Bulldog puppy right for you and your family?

If you have decided to buy a French Bulldog, please make sure that it will fit into your lifestyle, work commitments and family life.

Whilst French Bulldogs don’t need a lot of exercise, they are very clingy and do demand a lot of attention. They are one of those breeds that suffer with separation anxiety and are often better when homed in pairs.

If you are active yourself and enjoy long walks, then a French Bulldog really isn’t the dog for you.

However, if you like a couple of short walks each day, perhaps live in an apartment, and like to have cuddle up on the couch, a French Bulldog’s a great choice.

What age should I buy a French Bulldog puppy?

This is another factor that comes into play when looking to buy a French Bulldog puppy and should never be overlooked: Puppies should not leave their mother before the age of 8 weeks old. If they leave the mother before this, it can affect their health and behavior in the long term.

Never buy a French Bulldog younger than 8 weeks as it won’t have received the nutrition it needs form the mother and will be much harder to train and socialize.

There are so many scams going around with popular pedigree dog breeds that I’ve lost count of the amount of ways people come up with take your money.

There are scammers out there who know how easy it is to pull a fast one on a person who has fallen in love with a puppy.

Here’s a list of the most common scams you might come across when buying a French Bulldog puppy:

French Bulldogs are one of the most popular dog breeds in the country right now, and it’s easy to see why. They suit the lifestyle of owners who don’t have much room or have a more sedentary lifestyle.

However, with this explosion in popularity has also come a downside: unscrupulous breeders looking to make a quick buck.

For first time dog owners, it’s easy to quickly fall into the trap of buying the first French Bulldog you see. I implore not to do that, but instead ask the questions of a French Bulldog breeder I’ve laid out and know what to look for when buying your puppy.

If you do your due diligence, not only can you reduce the risks of buying an unhealthy French Bulldog, but you will also do you bit to get rid of the bad breeders.