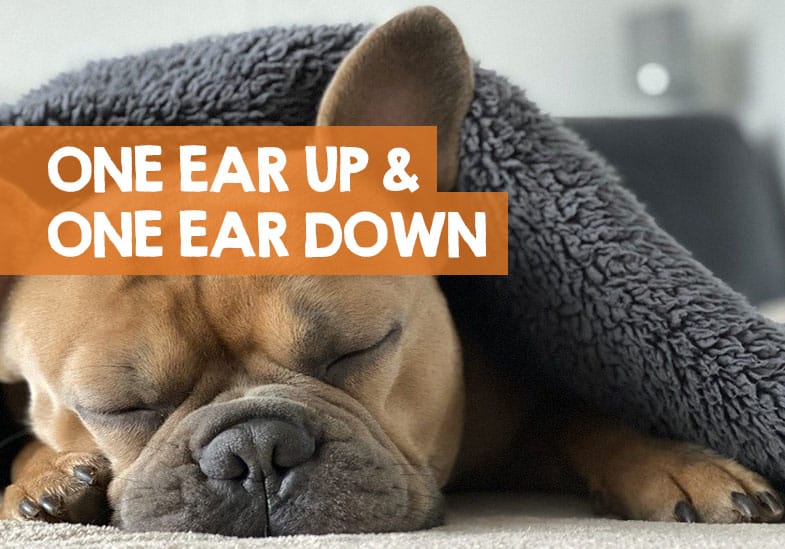 Certain dog breeds do have erect ears while other breeds have floppy ears. But then occasionally you might see a dog with has one ear up and one ear down. It’s cute, but odd at the same time, so why exactly is this?

What does it mean when a dog has one ear up and one ear down? Sometimes one ear on a puppy will remain down until they fully mature into adult dogs and the cartilage strengthens. Other dogs might have one ear up and one down due to injury, health conditions, or attempting to listen.

More about dogs with one ear up and one ear down

Before you start panicking that your dog only has one ear up with one ear down and flopped, read on. I will explain in detail why your dog has one floppy ear down, with the other standing to attention and erect.

Some dog breeds have floppy ears

If your pup is a Beagle or a Cocker Spaniel, then they’re going to have floppy ears. It’s the normal trait of such dog breeds. Other breeds with floppy ears include:

Here’s an interesting fact: According to Darwin, as the natural instincts for survival diminished because of domestication, dogs no longer needed to keep ears erect and alert for any sounds. The result was some dog breeds developing floppy ears.

Which dog breeds have pricked ears?

On the other side of the coin, there are the dog breeds who still have pricked ears with both standing up. This ear characteristic is typical of the following breeds:

These dogs are known to have been hunting dogs or guard dogs many years ago which results in having alert, pricked up ears. These characteristics continue to come through in these breeds to this day.

One thing you’ll notice though is that there’s no dog breed who typically has one floppy ear and one pricked ear.

Puppies are born with floppy ears

All puppies are born with their ears flopping down. If you’re not aware of this fact, you may be alarmed when your litter of Bull Terrier pups is born, and every pup has floppy ears. But rest assured this is normal.

During their developmental stages, the puppy’s ears will start to become erect if they’re meant to be. Sometimes, one ear will stand up before the other, creating an image of a dog with one ear up and one ear down. Again, this is normal.

Depending on the dog breed, some puppies will already have pricked ears by the time they’re 8 weeks old. For other breeds, your puppy may only have fully-erect ears when they’re 7 or 8 months old.

Most dog breeders will tell you that puppies’ ears are fully erect once they’ve finished teething. I can only assume more energy goes into teething than the development of pointy ears!

Your dog is being attentive

Another reason your adult dog could be having one ear down and one ear up is because they’re listening to sounds around them.

If your dog is a particularly curious dog who tunes into every little peep, you may notice he or she listens with one ear fully erect while the other is turned sideways. This may give you the impression that the one ear has gone droopy.

Before deciding there’s something wrong with the physiology of your fur-baby, observe his behavior. Is he being attentive to sounds?

Your dog could have a health condition

If your dog is an adult and is a breed that typically has pricked ears, you can get concerned if suddenly his one ear starts to go floppy. It’s always a good idea to take your fur-baby to the vet for a full examination to rule out any of the following underlying health conditions.

If your dog has been in a fight with another dog, he could have been bitten on his ear. Check out for any wounds on his ear. He could have also injured his ear by going through a thorny shrub, digging under a fence, or even getting electrocuted by an electric fence (like my friend’s German Shepherd).

Otitis media is a bacterial infection of the ear. It causes inflammation of the ear and can be present on the outside of the dog’s ear or in the inner or middle ear canal. Signs of this infection include your dog shaking his head all the time and a floppy ear.

Sometimes, an abscess may form in your dog’s ear. This is often caused by a build up of dirt in the ear. But an abscess may also be the result of an injury to the ear, parasites, or an infection that hasn’t been treated properly. This painful condition leads to swelling of the ear and your dog will scratch frantically.

If your vet diagnoses your dog with ear hematomas, you may be wondering what he’s talking about. In simple terms, this is when a blood vessel in your fur-baby’s ear bursts and the blood flows into the area between the ear cartilage and the skin.

This happens when your dog has a bite to his ear, has an infection and been scratching his ear or punctured his ear somehow. Often, it’s the result of ear mites living in your dog’s ear. Out of frustration, your dog will shake his head violently or start to scratch his ear all the time.

What can I do if my dog has one ear up and one ear down?

The first step to figuring out why your dog has one floppy ear and one pricked ear is to determine if it’s related to certain behaviors such as listening to sounds and commands. You’ve also ruled out that he’s no longer a puppy. This leaves you with a medical condition that may need to be treated.

If your vet does diagnose one of the abovementioned underlying health issues, you could consider doing any of the following:

Whatever the reason for your dog having one droopy ear, I always say have a chat with your vet. This could prevent your dog from having problems in the future and even developing a permanent floppy ear.

One day I was visiting a friend on his farm in the countryside. He had just brought a young German Shepherd pup home and my main reason for visiting, of course, was the pup. She was very sweet and had beautiful, erect ears. That is, until she ran under an electric fence!

All of a sudden, the one ear flopped.

My friend was not impressed but relieved when the vet assured him his puppy would recover and her ear would stand up again, eventually.

Which it did after a few months.

So, whilst you might have a dog with one ear up and one ear down, it doesn’t always mean it will stay like that.

But even if it does, it’s a cute look!