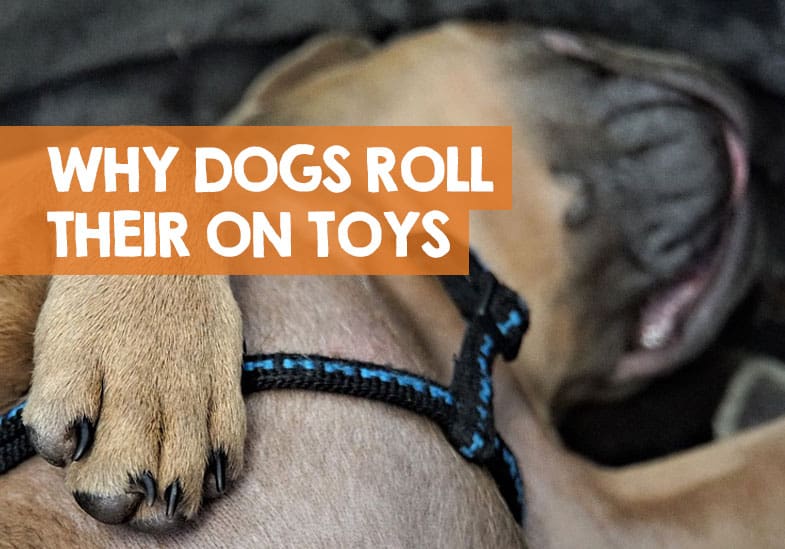 Have you ever noticed when playing with your dog that sometimes they might start rolling around on top of their toys? My dog does this a lot, and it’s like he is trying to hide his toy or even maybe have a good back scratch.

Either way, I wasn’t entirely sure why he did this until I researched it this week. Bottom line is though, he always looks happy enough rolling on his toys!

After speaking to some of my friends, they also reported the same behavior. One even mentioned his dog likes to roll on his kids’ toys! My initial thought was that it could be a show of submission, but after looking into it, here’s what we found.

Why does my dog roll on his toys? Dogs will roll around on top of their toys, a treat, or any other object as a sign of happiness. They could be rolling onto hard toys to relieve an itchy back or they may even be rubbing their own personal scent onto the objects. It could also be a sign of obsession with their toys.

That’s the very short answer, but there is more to it…

If this behavior has been puzzling you, then read on. Let’s talk in more details about why our dogs and puppies like to roll onto their toys. I’ll also mention other objects your dogs may like to roll on and why they do it.

Why does my dog like to roll around on top of his toys?

Dogs are always up to something. They may be mooching around the garden, checking out the smells. Maybe they like to dig under the fence to get to the neighbor’s dog. Your dog could even be gnawing the bone you gave him last night.

These doggy behaviors are the norm and acceptable. We don’t question them too much. But what do you make of your dog rolling around onto his toys?

1. Your dog is happy

The next time you see your four-legged furry friend do a tumble and roll onto his toys, observe his body language. If he looks relaxed and has a “happy” face (we all know what that looks like!), then know your dog is simply happy.

Dogs often roll onto their back and wriggle around because they are content and feeling blissful. When your dog chooses to roll onto his favorite toy, he may be doing it because it’s all feeds into his “I’m feeling so good today!” feeling.

Every dog who has his own batch of toys will also have his favorite ones. It could be the blue fluffy rabbit he grabs every time you come home or the tennis ball he enjoys playing fetch with. These are all associated with happy times and rolling over onto them is just another way of showing his happiness.

Handy Hint: Did you know that some tennis balls can actually be bad for dogs as toys? Here’s why including the unseen dangers.

2. Your dog is leaving their scent behind

Your dog may be rolling onto his toys to leave his personal scent. Dogs will rub against any object as a way to let others know they’re around. It’s also a way of marking their territory without lifting or squatting their legs.

By leaving their own natural scent on their toys your dog is telling other dogs (and everyone else) that this is his toy and best leave it alone. They will also do this with “prey” and dead animals they find.

Dogs are quite proprietorial when it comes to their toys but then aren’t we all?

Often your dog will roll onto his back and wriggle around to scratch an itch. Sometimes, your dog is smart enough to work out that the hard wooden toy she likes to chew on makes a great back-rub too.

Check out what toys your dog is rolling onto. If it’s a hard toy or object and he’s making quite a show of it, you can assume he’s trying to deal with an itch.

If this is happening often, make sure your dog isn’t suffering from a skin allergy. Or, that he’s been bitten by ticks. These bites can lead to discomfort so check his back for any of these conditions.

4. Your dog wants your attention

Dogs love to have the attention of their human friend. They’ll resort to a variety of tactics to get this attention and while some behaviors can be annoying, others are just playful. Rolling onto his toys is a playful way of telling you he wants you to join in with the game.

The next time you’re lounging on your couch and your dog starts to roll onto his toys see it as an invitation to get onto the floor and give your fur-baby some attention.

5. Your dog is being obsessive

Sometimes, your dog could be rolling onto their toys because they’re being obsessive. This kind of behavior can be a sign your dog is feeling anxious or fearful. But it could also be learned behavior associating toys with certain responses.

Most times this kind of obsessive behavior is nothing to worry about. Your dog has simply become attached to his toys and likes to roll on them often.

However, if your dog starts to growl whenever he rolls onto his toys and looks at you fiercely (we know that look) then it’s time to change the behavior.

Dogs may be rolling onto their toys as a way of possessing them. This could turn into an obsession especially if they’re feeling threatened in any way.

Ask yourself: has there been a change to his home environment, a new baby joining the family, or another pet coming into his life?

Why does my dog like to roll on smelly objects?

Your fur-baby is rolling onto his toys because he’s happy, looking for attention, leaving his scent, or getting a tad obsessive.

But how about the times he goes and rolls on smelly objects? This can include toys that have become smelly over time.

Way back when dogs were wolves and still wild creatures, their instincts told them to roll in smelly objects. This could include a rotting bone or carcass, a stinky plant, or even a muddy puddle. Wolves did this to hide their own smells and distract both predators and prey.

While your domesticated fur-baby no longer needs to worry about being hunted down or hunt for her own food, the instinctual desire to roll in smelly objects is still strong.

2. Your dog has been to the pet groomer

You’ve picked up your pooch from the pet groomer and heading on home. She smells delightful (at least, you think so!) and even has a cute pink ribbon attached to her ear. The minute you get home and open the car door she’s off like a shot.

Before you can stop her, she’s rolling on that smelly dead bird you forgot to remove from the garden. Or, taking a good roll in the horse manure you’ve sprinkled in the flower beds. Why?

Dogs often don’t like the scented perfumes of the shampoo and talc powder used while being groomed. The same sentiment applies when you’ve given them a bath at home. The only way they can get rid of the scented smells is to find an offensive smell elsewhere!

The next time you bring your dog home after grooming or given him a bath at home, make sure he’s kept from rolling onto smelly objects including that smelly teddy bear of his.

Dogs do the strangest things; only last week I had to research why my dog was backing his backside into me! Rolling onto their toys is just one more to add to the list.

But bottom line is that a dog that likes to roll on his toys is most likely perfectly fine and healthy!