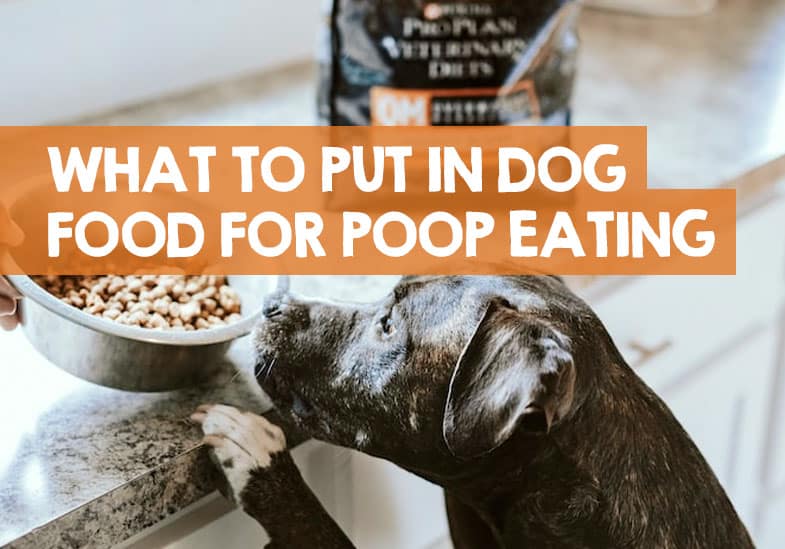 Does your dog snack on poop? If so, you might be wondering whether there’s anything you can add to their dog food to finally stop them from eating feces. It’s not the nicest of topics, but it will explain how to make dog poop taste bad to discourage the filthy habit.

There are a few things you can put in dog food to stop your dog eating poop. This can include pineapples to meat tenderizers, canned pumpkins, and digestive enzyme supplements and powders.

The list is long. But it’s best to chat with your vet before adding any of these new items into your dog’s food. All dogs are different so should have an individual approach as a stool-eating deterrent.

Here’s what your vet could recommend which could include this powder on Amazon.

If you’ve witnessed your dog feasting on poop, you’ll agree that it’s beyond disgusting.

There’s nothing amazing about poop in any shape or form — well, that’s what we humans think. But dogs think otherwise.

Most dogs don’t mind chowing down on poop, whether it’s their own or another animal’s. The scientific name for this bizarre dog behavior is coprophagia.

While not all dogs do this, a good number eat poop without a care in the world.

One study found that 16% of dogs snack on poop several times a week. The worst part? Most dogs that eat poop prefer it fresh, not days old. Yuck!

There are many reasons behind this nauseating behavior.

Your dog could be snacking on poop because: their instinct tells them to, they’re hungry, it’s their way of coping with boredom or anxiety, or they simply love the poop’s taste and flavor.

It might also be an issue of poor diet (lack of enough nutrients or fiber) that drives them to seek nutrition from other “food” sources like poop. Or a digestion problem that makes them defecate undigested food pieces. Most dogs are attracted to the undigested food remains in poop.

Adding some dog-safe edibles to your dog’s regular food can stop them from pursuing their poop-eating behavior.

But as with every other solution involving adding something new to your dog’s diet, it’s best to consult your vet before using any of the items in this list.

Your vet will guide you on the correct quantity to add — moderation is key. They will also advise you on whether whatever you’re considering adding is safe for your dog based on their current health status or medical history.

That said, here’s what you can put in your dog’s food to prevent them from snacking on poop.

Meat tenderizers have a natural digestive enzyme known as bromelain that helps with full protein digestion.

So, when your dog poops, their stool won’t be full of proteins that often give it a yummy taste.

Meat tenderizer also has another digestive enzyme, papain, that can make poop taste awful. Your dog won’t be interested in chowing it down.

2. A few pieces of raw pineapple

Experts say that raw pineapple (not canned pineapple, as the syrup has high sugar content) is a great snack for dogs. So it’s safe to add a few bite-sized pineapple pieces to your dog’s food.

Similar to meat tenderizers, pineapples also have bromelain. It will help break down all the protein in your dog’s food so their poop won’t have that rich, appealing taste.

Thanks to pineapples, your dog’s poop will taste and smell different. They won’t want to eat poop that’s unpleasant to their nose and taste buds.

Most of these supplements come in powder or liquid form, so it is easier to mix the supplement with your dog food.

A digestive enzyme supplement will improve the breakdown of food in your dog’s digestive system, which is a good thing for two reasons.

One, your dog’s poop won’t have the undigested food pieces that your dog often finds attractive.

And two, proper food breakdown will ensure your dog’s body absorbs all the nutrients in the just-eaten food. That way, your dog won’t suffer nutritional deficiencies that can make them crave gross stuff like poop.

Canned pumpkin has a good amount of fiber and nutrients. This can help if your dog’s poop-eating habit is triggered by nutritional deficiency or hunger (the pumpkin’s fiber content will keep your dog full after meals, so they won’t be interested in poop).

It’s also said that the beta-carotene compound in pumpkin (what gives pumpkin the distinct orange color) can make a dog’s poop taste horrible.

Adding only a few tablespoons of plain canned pumpkin to your dog’s meal or homemade treat will do — your vet can guide you on the right amount.

Apple cider vinegar, in its diluted form, is completely safe for dogs to ingest in small amounts.

If your dog doesn’t have enough stomach acid (hydrochloric acid), their digestive system won’t digest food properly and absorb all the nutrients. As a result, your dog will suffer from nutritional problems that will lead to poop cravings.

Diluted ACV has the right level of acidity. Mixing a small amount with your dog’s food will boost the stomach acid levels in your dog’s digestive system and improve digestion.

Plus, their poop will have a weird vinegar smell that your dog won’t want to sniff or taste.

There are many veggies you can add to your dog’s diet to curb the poo-eating habit — like a small amount of plainly-steamed broccoli or zucchini.

Make sure the veggie is finely chopped before mixing it with your dog’s food. These green veggies are high in fiber and will keep your dog full enough not to crave poop.

By adding a dog-safe green vegetable to your dog’s food, you’ll be offering them something that has the same texture as poop. That way, they won’t feel the need to dine on poop.

Most poop-eating dogs like to chow down poop that has traces of undigested grains since they find grains tasty.

By adding a small amount of overcooked dog-safe grains such as quinoa or brown rice to your dog’s food, your dog won’t be tempted to eat other pets’ grain-filled feces.

Tasting grains in their food bowl regularly will make them stop viewing poop that has grains as a must-eat delicacy.

Poop has a bit of fat in it. Most dogs are attracted to the poop’s fatty taste since there’s nowhere else they can get that yummy, fatty taste.

When you mix a small amount of coconut oil with your dog’s food, they will eventually lose interest in eating poop. Reason? They will be satisfied with the appealing taste and flavor of coconut oil in their regular diet.

Make sure to ask your vet about the quantity of coconut oil to put in your dog’s food.

How to stop dog from eating poop home remedies

What to put in dog food to stop eating cat poop

These edible items will remove your dog’s desire to gobble cat poo. But remember to speak to your vet before adding anything new to your dog’s food.

Photo in header from https://unsplash.com/photos/NOBRu2TAqcs