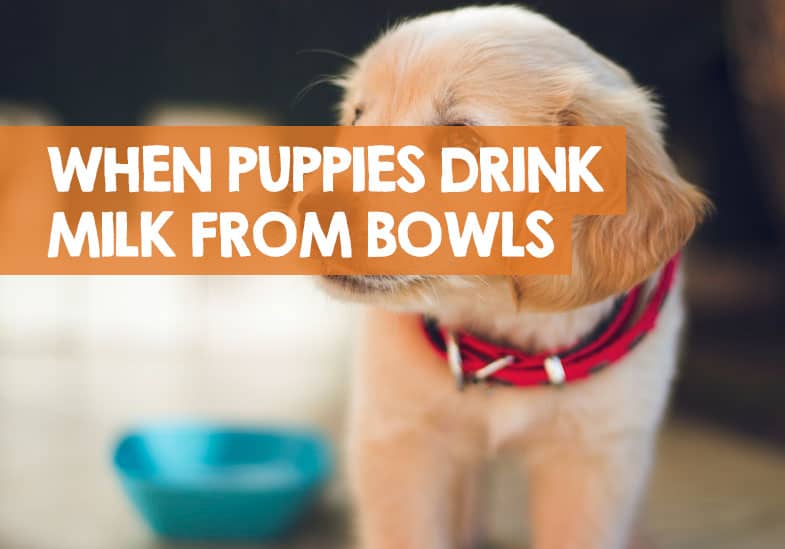 There comes a time when a puppy must quit suckling or bottle-feeding and start drinking milk or water straight from a bowl. This short guide explains what you need to know about puppies drinking milk from a bowl on their own.

Puppies can drink milk from a bowl from three weeks old (the same time they begin weaning). Runts are an exception, though. If you own a runt, the vet may suggest bottle-feeding them a little longer before switching to a bowl.

Having said this, newborn puppies tend to start drinking water around the age of 3 to 4 weeks old, rather than just milk. By the age of 6 to 7 weeks they should be fully weaned from milk and can just drink water from a bowl on their own.

Below explains the idea of introducing puppies to drinking milk from a bowl on their own, why the three-weeks-old mark is the appropriate time, when they should stop taking milk, whether they can have cow (or even goat) milk and more.

Puppies drinking milk on their own

During the early weeks of a puppy’s life, milk is the only food they know.

Some are lucky enough to suckle their mother’s breast milk right from birth. And for those that can’t feed directly from their mother for some reason (say if the mother has rejected them or died), being bottle fed with a quality puppy milk replacer also works perfectly fine.

When a puppy is below three weeks old, they should only feed on breast milk or a milk replacer. They will get all the nourishment and hydration they need from milk.

Water isn’t an option since their digestive system isn’t developed enough to digest it.

But they can’t be “pampered” for too long. As a puppy grows, they need to start learning some independence — like drinking milk from a bowl on their own.

The appropriate time to start serving your puppy milk in a bowl is when they reach three weeks old. Why three weeks, though?

There’s no weaning without bowl-feeding. Your puppy must drink milk from a bowl, so they can also get used to having solid foods from a bowl.

If your puppy is still drinking milk from the bottle weeks after turning three weeks old, this will frustrate your weaning efforts and delay their weaning.

Look at it this way.

If you’re still bottle feeding your puppy when it’s already time to introduce other foods, they will think they have two options: to either feed from the bottle or a bowl.

They will have no interest in trying out the food sitting in the bowl because they’re getting their favorite drink from the bottle.

Delayed weaning isn’t a good thing. It can cause health problems since a growing puppy needs extra nutrients and energy to develop.

So if your puppy begins to drink milk from a bowl, it will be easier for you to quickly transition to weaning. They will have an idea that all their food (including milk) always comes in a bowl and nowhere else. This will leave them with no choice but to drink and eat.

What about runt puppies?

Things may be a little different for runt puppies.

If you own a runt, your vet may suggest continuing with bottle feeding for a while, even after they’ve crossed the three-weeks-old mark.

But this doesn’t necessarily mean that you will put weaning on hold. They will still bottle feed as you slowly introduce solid foods.

Runt puppies have unique nutritional needs compared to other normal-sized puppies, so it’s best if they drink up their milk. Bottle feeding helps with this.

You see, puppies don’t take milk in bowls “seriously” at first. It’s like all they see is a large basin filled with a white plaything.

You will likely see your puppy dipping their paw out of curiosity and splashing milk onto their face. Or worse, flip the bowl over and make a huge milky mess!

Most of the milk ends up on their paws and face — not in their mouth. But don’t stress. It’s pretty normal for puppies to lack “bowl manners” when they’re new to bowl-feeding.

The good news is, these milk-sponsored aerobics only last a few days. Soon enough, your friend will start clearing their bowl of milk even without you pleading with them.

Don’t serve your puppy cow or goat’s milk. Here’s why

While milk will still be a huge part of your puppy’s diet when they start weaning, you should only stick to a puppy milk replacer or water — no dairy milk whatsoever.

The biggest problem with cow or goat milk is that puppies (and even adult dogs) don’t have the enzymes to digest the lactose in this type of milk. Drinking any milk other than a milk replacer will lead to serious gastrointestinal upsets (bearing in mind how sensitive their tummies are).

And even if the milk is lactose-free, its high protein and fat content will cause stomach distress.

Can puppies drink milk replacer from a bowl?

Also, cow or goat milk doesn’t have the same level of nutrients as a milk replacer. So, from a nutritional standpoint, so yes, your puppy is better off drinking a milk replacer from a bowl approved by your vet.

When your puppy will no longer need to milk

Your puppy will still need to take milk at the start of weaning because they haven’t gotten accustomed to solid foods.

Withdrawing milk completely will only leave them hungry most times since they are yet to love eating other foods. That’s why experts often recommend mixing a weaning puppy’s food with a bit of milk (or warm water) to make it more appealing to eat.

Plus, milk will help your puppy stay hydrated if they aren’t drinking their water as expected.

You should place a shallow bowl of fresh water next to their food or milk to help them get used to drinking water.

As days go by, they will start enjoying the taste of solid foods and drinking more water.

Puppies starting on weaning have to first eat small amounts of solid food several times a day (since their stomachs can’t hold more food). Your vet can guide you on the portion.

And as they continue to grow, so will their food demand. That means they will have to eat more portions (but the frequency will reduce). It’s best to consult with your vet before making any changes to your puppy’s food portions and feeding frequency.

When they turn 7-8 weeks old, drinking milk should be a thing of the past.

At this age, they will only need to eat quality puppy food and drink enough water — a milk replacer won’t be part of their diet anymore.

FAQs on drinking milk from bowls

Can puppies drink milk replacers from a bowl?

Yes, that’s correct. Puppies (except runts) that have turned three weeks old should start drinking milk from a bowl.

Can two weeks old puppies drink from a bowl?

The short answer is no. As discussed earlier, only puppies above three weeks old can start drinking water or milk from a bowl.

When can puppies drink from a saucer?

Generally speaking, puppies can start drinking from a saucer when they turn three weeks old.

What can I feed a 3-week-old puppy?

A three week old puppy can have a milk replacer, water, and a vet-recommended puppy kibble moistened with warm water or milk.