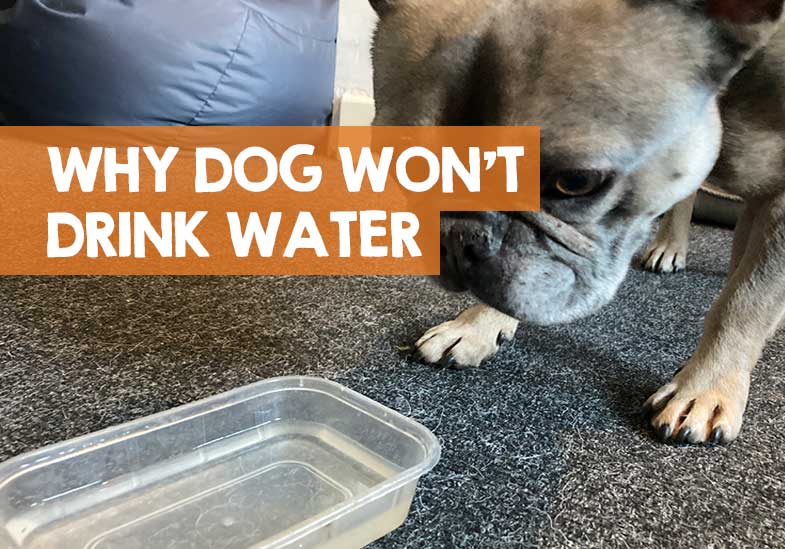 If your dog is refusing to drink water from his bowl, or when you’re out on a walk, then he could become dehydrated and quickly unwell. In some instances, where a dog that regularly won’t drink water, the consequences can turn life-threatening.

I’ve researched and compiled the best results possible that explain why your dog won’t drink water, whether that’s from a bowl, when your away from the home, or when inside.

Why won’t my dog drink water?

Drinking water is an instinct and natural behavior for dogs. Therefore, a dog that refuses to drink water is often a sign of an underlying problem or issue.

First and foremost, you must visit the vet if you are unable to get them to drink over 24 hours, or if you suspect there is something amiss with their health.

In the meantime, here are the most likely reasons why your dog won’t drink water at the moment.

1. Dog won’t drink water due to a mouth injury or dental issue

For most dogs, a mouth injury will cause them to refuse and not drink water. Dogs love picking up and chewing on sticks, chew toys, and other rough items, as all dog owners are aware.

Unfortunately, these objects will sometimes break or splinter causing injuries in or around the mouth area resulting in severe pain for the affected canine.

In most cases, dogs will also refuse food and a speedy visit to the vet is necessary for them to return to their normal drinking and eating habits

Similarly, in older dogs, chewing over numerous years can cause dental issues that are equally as painful meaning they hurt when trying to drink water. Here’s how to recognize tooth ache in your dog, as they won’t be able to tell you.

When left for a long time, these issues can quickly turn serious, resulting in infected gums or broken teeth. If you suspect that your dog is having trouble drinking due to this, take them to the vet immediately.

It is not uncommon for dogs to refuse to drink until they are severely dehydrated because of dental problems.

2. Dog won’t drink water due to a change in taste

Additionally, dogs are smart creatures, and will often detect even the smallest change to their water source. At times, when your dog is refusing to drink water, it can signify that they are unnerved by your choice to swap out their usual source of water with a different one.

If your dog suddenly won’t drink water inside, but will outside, this could be reason. Now, you don’t want them to revert to drinking rainwater, as this can make them ill.

Often, this happens when you are forced to give them tap instead of bottled water, distilled water (bad idea), or when traveling elsewhere in the country and having limited options.

Thankfully, with some encouragement, most dogs will eventually give in and drink when fatigued. If push comes to shove, you can try mixing in some of the old water with the new water to see whether this entices them to drink.

3. Dog won’t drink water due to a health issue

In some instances, diseases can also affect the amount that dogs will drink. For example, kidney disease commonly causes nausea as it progresses, resulting in affected dogs refusing to touch their food and water.

Similarly, diseases that cause inflammation in the intestines, like gastroenteritis and pancreatitis, can also cause symptoms of nausea in canines.

Often, these diseases will be accompanied by other signs, such as vomiting and diarrhea… and your dog won’t drink water from his bowl perhaps due to weakness or nausea.

Therefore, it is important to take your pooch to the vet if you notice this, as dogs can become dangerously dehydrated when exhibiting these symptoms.

Nervous dogs that are prone to anxiety, can refuse to drink when they feel uncomfortable or fearful. If you own a dog similar to this, try finding out what is making them feel uncomfortable and take the necessary steps to reduce their stress.

For example, it is common for dogs to become nervous around other dogs while eating or drinking. If you suspect this is the case, move the competing dogs or provide additional water bowls around the house for your nervous pooch.

It is also a good idea to move the bowl to a quiet place away from any areas where there are loud or unfamiliar noises, as dogs can develop negative associations with areas such as these in the home.

It’s not uncommon to have two dogs in the home, one of which is more dominant. One of the pair can even urinate near or on water bowls for fear or dominance reasons. This will mean the other dog can stop drinking water from the bowl as a result.

5. Dog won’t drink from a water bowl in public for territorial reasons

And similarly, to the last point, do you have a dog that won’t drink from water bowls in public? Mine does this, and I’ve always put it down to him sensing that other dogs have been drinking from it.

It makes sense, that if nervous, the dog might not want to drink from the outdoors water bowl if he thinks it belongs to another dog and doesn’t want confrontation.

Why a refusal to drink water can be risky

To make matters worse, this behavior is especially risky for younger dogs or those with health issues. Therefore, dealing with a pooch who refuses to drink from its water bowl that’s topped up all day, be it a puppy or an older dog, is often a frustrating and worrying experience for dog owners.

However, gaining a proper understanding of why dogs exhibit this behavior can help us to better deal with this problem.

In addition to this, by learning to recognize the symptoms of dehydration can allow us to address the situation before our dog becomes severely ill. Here’s what to look out for:

The symptoms of dehydration in dogs

One of the most reliable ways you can do this is by testing the elasticity of your pooch’s skin. If you suspect your dog is dehydrated, gently pull on their skin and check to see if it returns to its original position quickly.

If the skin stays where it is or takes a long time to return to normal, then your canine friend is likely suffering from dehydration.

Another symptom of dehydration worth checking for is Xerostomia. This condition causes dog’s gums to become dry and sticky and their saliva to thicken, eventually resembling a paste.

Here’s why you should not let your dog’s mouth get dry according to the experts at PetMD.com.

“Drool – it’s one of the less desirable aspects of pet ownership, right? But in reality, saliva plays a number of vital roles. It moisturizes food, making it easier to swallow, is essential to oral comfort, and helps prevent dental disease and infection within the mouth. That’s why dry mouth (xerostomia) in pets can be so devastating.” (view source)

You can check for it by pressing your finger lightly against your dog’s gums and then remove it.

If hydrated properly, their gums will briefly turn white and then return to their normal pink hue within seconds. In dehydrated dogs, this process takes much longer, sometimes up to a minute or more.

How important is water for dogs?

Dogs need to drink water regularly to stay healthy and fit. The reality is, that’s it’s the only drink dogs need as I’ve researched previously.

When compared to us, dogs are at a greater risk of becoming dehydrated due to the way their bodies function. For example, unlike humans, dogs cannot sweat effectively and instead release heat through vigorous panting.

Additionally, it is worth mentioning that dogs do have sweat glands, contrary to popular belief. However, these glands are located in the paws and are essentially useless when it comes to lowering a dog’s temperature.

Therefore, your dog must drink regularly throughout the day, especially during warm bouts of weather.

How much water does a dog need to drink daily?

Before panicking when your dog refuses to drink and won’t take water from the bowl, you should understand the amount of water they need to remain healthy.

Firstly, it is important to note that nearly all dogs forget to drink water from time to time. Although there are recommendations on how much water dogs should drink a day, most canines regularly consume less water without experiencing any issues.

For example, this is normal behavior for older dogs, who are usually less active than their younger counterparts.

Likewise, if your dog has been at home all day, or if he is poorly or nursing an injury, he will probably drink less water than a dog who has been out for rigorous exercise.

Therefore, there is no need to force them to drink if this is the case. Despite this, you should make sure that you are aware of how much they are drinking overall. Less active dogs can still fall prey to dehydration, especially if they forget to drink or have trouble getting to their water bowl.

When it comes to the amount of water recommended for canines to drink, it can vary depending on the pooch’s size, diet, and level of exercise.

Thankfully, there is one rule to follow that enables you to determine this easier. In general, most dogs need around an ounce of fluids per pound of their body weight daily to stay healthy, with puppies and extremely active canines needing a little more on average.

Visualizing this, it would mean that a 10-pound dog needs just over one cup of water per day… so if they are not drinking water at that volume, perhaps talk to your vet.

Similar to humans, dogs need to drink plenty of water to stay healthy, and in most instances that is exactly what canines do. For most dogs, drinking water is completely normal, and they will seek out a water source on their own, especially after a long or tiring walk.

However, it is not all that uncommon for dogs to refuse to drink water, and this can, unfortunately, lead to dehydration.

If you are worried, please call a vet.

After all, if your dog won’t drink from the water bowl, and it becomes a regular occurrence, it’s a significant problem.