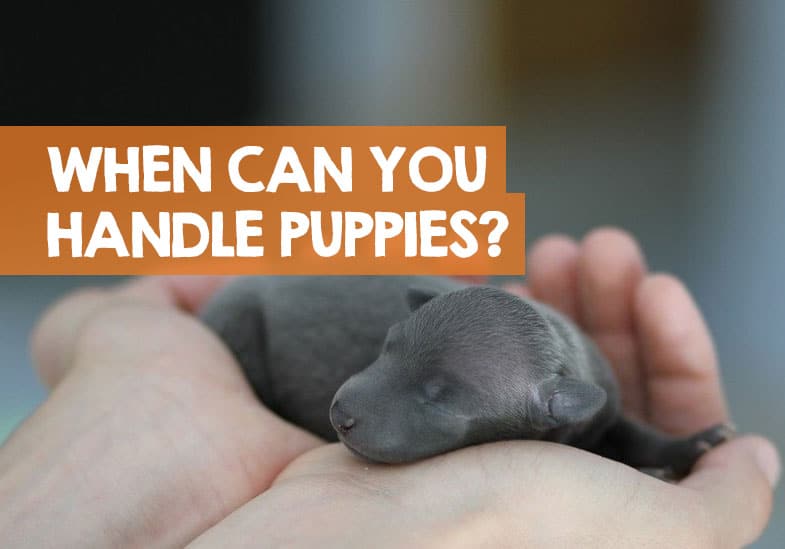 Newborn puppies are the cutest of things. It can be so tempting to want to pick them up, touch them, and hold them close to you. But as newborns they are much more vulnerable to getting sick, are extremely fragile, and there is also a belief that the mother could reject them once you touch them… so what is the truth?

I decided to research into it to find out when can you start handling puppies after they are born; plus, if it’s bad to hold a newborn puppy or not. Here’s what I found out.

When can you handle newborn puppies? You can touch handle puppies 3 weeks after they are born. You should not really touch them before this age unless you really have to. Be careful though, as some mothers can be aggressive particularly it held when being nursed.

That’s a very generic answer, and there will be exceptions to this rule, which I will explain below. I will also put to the bed the myth about mother dogs rejecting their puppies if you touch them after they are born.

When can you touch a newborn puppy?

There are conflicting opinions online, even from vets, about how soon after birth can you handle puppies. One popular time that crops up a lot is 3 weeks as being ok to hold newborn puppies. This is one that I believe holds most credence, and I will explain why.

At 3 weeks old, puppies will be starting to move around by themselves more. Their eyes will have opened (read more), and whilst still completely dependent on their mother, do have a bit more freedom.

I believe at this point in their development, it’s likely that the mother won’t be as protective or tired as she might have been directly after giving birth. That should reduce the chances of her snapping at you when you decide to pick up and hold a puppy.

That doesn’t mean mothers are always aggressive when you handle their puppies, it’s just a risk you need to be consider. The best advice here is to not touch her puppies whilst she is cleaning them, or they are nursing from her.

Most mothers will be able to feed and clean young without your help.

Handy Hint: Newborn puppies will get all the nutrition they need from their mother, but can start to drink water and eat food at 4 weeks of age onwards.

When can you hold a newborn puppy then?

However, that doesn’t mean it’s bad to touch, pick up, handle, and hold puppies before the 3-week point. There will be times when you don’t actually have any choice and need to handle them for their benefit.

Here are some instances when you can touch newborn puppies before they are 3 weeks of age.

All those points above could be cases where you have no choice but to touch a newborn puppy before the 3-week point.

Important: Don’t touch puppies of any age if the mother look aggressive, defensive, or growls.

Will dogs let you touch their puppies?

Providing you are familiar to your dog, and you’re not a stranger, then most mother dogs will let you touch their puppies. When I was a kid, I was there for the birth of my dog’s puppies, and she had no issue with me touching them.

Now I am older, my advice has changed somewhat, but it goes to show that I think most dogs will let owners become part of the process providing you respect the boundaries.

Then of course you have the situation where new owners will start coming to look at puppies from as early as the 6 to 7-week age. Whilst you can’t give puppies to a new home before 8 weeks of age, many people will visit them before that to choose.

At this point, the mother dog will be used to you picking up and holding her puppies, and even letting them get handed to other people without rejecting them afterwards.

How to handle puppies properly

When it comes to the act of handing and touching puppies, there are some important things to consider. These will help to safeguard the health of the newborns and reduce the risk of accidents.

Handy Hint: Did you know that the age you can sell and buy puppies is actually different depending on what US state you are in?

Will the mother reject newborns if you touch them?

I’ve read multiple accounts online which stats this is a myth. In fact, the Cuteness.com website say it best with the following quote:

“There is a long-standing myth that touching newborn animals will cause their mothers to reject them. This is almost never true, and puppies are no exception. In fact, family dogs are often very tolerant of their favorite humans touching their babies.”

But that doesn’t mean you should be touching the puppies all the time.

Earlier I touched in an experience from when I was kid so wanted to share that in more depth… it’s not the 3 week rule, but explains what is possible.

When I was 12 years old, our dog gave birth to puppies in my room. It’s where she felt comfortable enough to nest down in preparation.

Because I was there with her during the birth, I believe it made my smell part familiar to the newborns and made my dog more comfortable with me handling her puppies.

I vividly remember trying to attach a few of the newborns onto her as they struggled to find a space in the litter to get milk.

I wasn’t picking up and touching the puppies all the time but kept a close eye on things to make sure all the newborns were healthy and none were getting neglected.

You will need a lot of self-control to not want to reach out and touch a puppy when it’s born. They are so small and helpless with those closed eyes and cute little pink paws and nose.

However, as they get older and pass 3 weeks in age, touching them will help them to get used to humans. It should help to aid in socialization and prepare them for leaving their mother, which can start as young as 8 weeks of age.

I do believe that you should avoid touching puppies before this though if you can and give mom the space to be a mother.

I frequently write about doggy behavior and my experiences with puppies. Here are just some of the more recent articles.