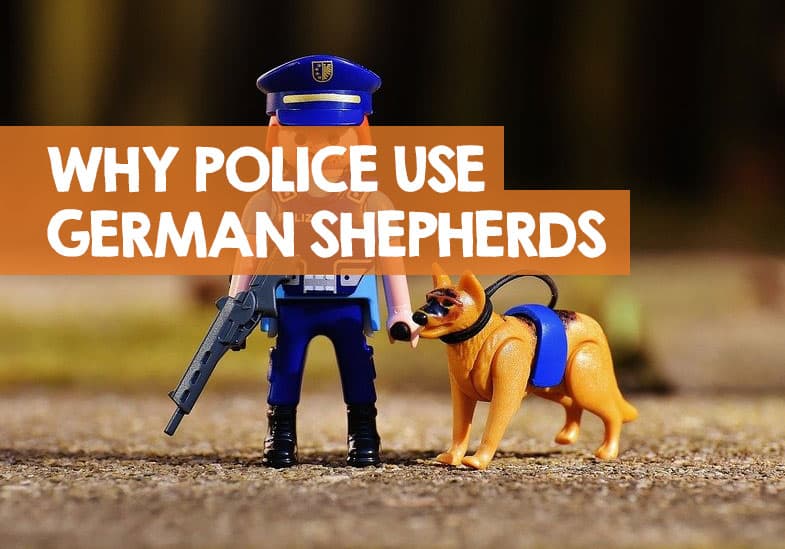 When it comes to working with law enforcement, no other dog has captured the public’s imagination like the German Shepherd. Over countless years, this fantastic breed has gained a reputation as the world’s best police dog.

There are some very good reasons why German Shepherds are good police dogs and why this breed has been used down the years (for example, instead of Pitbulls).

Today I will explore the myriad ways why German Shepherds make good police dogs, as well as the history of the breed – and other equally fascinating questions including why they began working with the police.

First and foremost, German Shepherds are used as police dogs and prized among law enforcement for their confidence and temperament. When highly trained, they are capable of dealing with high-risk situations, remaining calm, alert, and ready to respond and react to their handler’s commands.

For many breeds this line of work can prove stressful, however, this is not the case for German Shepherds, who thrive under pressure.

In addition, German Shepherds are relaxed and well-tempered dogs who will allow strangers to approach them if their handler gives the go-ahead. They will rarely show aggression unless their job requires it, making them a trusted breed for more delicate types of police work, such as detection of drugs, missing people, and search and rescue.

When it comes to loyalty, German Shepherds are second to none, quickly forming lifelong bonds with their owners and handlers. Furthermore, they will defend those they have bonded with fiercely if the need arises, fighting tooth and nail to protect them.

As you can imagine, these characteristics are why police dogs are usually German Shepherds rather than other breeds.

In terms of athleticism, German Shepherds are regarded as highly athletic dogs, being able to perform impressive feats of stamina and endurance when the time arises.

Interestingly, when compared to other breeds, they are not the fastest dogs, however, what sets them apart is their perfect size and stature. Smaller and faster breeds of dogs, such as Greyhounds and Whippets, are not well suited for police work due to their thin and delicate builds.

Whilst larger breeds of dogs are known to struggle with their stamina, limiting the roles they can carry out in the police force.

Lastly, because of their high levels of intelligence, German Shepherds are one of the most rewarding dogs to train. They will listen closely to their handlers, following commands, and showing an eagerness to learn.

With rigorous training, a German Shepherd will quickly turn into an elite and extremely well-disciplined canine, a perfect companion for officers.

Furthermore, German Shepherds are born with a natural desire to work, ensuring that they enjoy their roles in law enforcement. In fact, German Shepherds used as police dogs are purportedly some of the happiest canines in the world.

How did German Shepherds begin working with police?

The history of how German Shepherds began working with the police is a short but extremely layered one. It helps to look at the history of the breed first.

For example, when looking at German Shepherds for the first time, you would be forgiven for thinking that they are closely related to wolves. However, this is not the case. Instead, they are a relatively modern breed of dog, with their origins only dating back to around 1899 – much later than the majority of dog owners would imagine.

Around this time, large, industrialized cities were popping up all over Germany, causing the local populations of predators to heavily decline. As a byproduct of this, the need for sheepdogs, who had previously been used to defend flocks of livestock, began to become unnecessary.

However, this was not the end for the breed, and instead, they became highly prized as strong and intelligent working dogs.

Eventually, a German man named Von Stephanitz developed a keen interest in Germany’s native sheepdogs. You can read more about him on Wikipedia.

However, although Von Stephanitz greatly admired the breeds, he was not completely satisfied, and instead set his sights on finding the perfect working dog. In 1899, he would attend a dog show wherein he was shown a remarkably intelligent canine named Hektor Linksrhein.

Von Stephanitz was so impressed with Hektor that he immediately purchased him, and from there history was made.

Von Stephanitz would go on to create the Society for German Shepherd Dogs, declaring that the newly renamed Horand von Grafrath was the first German Shepherd and adding him to the society’s register.

From here, Horand would go on to be bred with other suitable dogs, resulting in the German Shepherd breed quickly exploding in popularity and abundance. Within a decade, German Shepherds were regarded as one of the world’s most common breeds, with the dogs being employed for various jobs.

Around 1910, after being approached by Von Stephanitz, German police departments began testing the breed for protection, tracking and other forms of sensitive work.

The German police were thoroughly impressed, and shortly thereafter, the dogs were used widely throughout Germany in branches of both the military and police.

From here, the use of German Shepherds as police dogs quickly spread, soon reaching Europe, America, and the rest of the world.

What roles do German Shepherds play in law enforcement?

If you are anything like the average person, you have probably grown up watching German Shepherds in the police on the television from a young age.

Through the collective mediums of TV shows, movies, and books, the image of German Shepherds chasing down and restraining criminals has been burned into our collective minds.

In addition to this, the large presence of police dogs in airports and events has gone a long way in coloring our perception of what we believe the breed, and in extension, police dogs as a whole, do in their everyday lives.

However, contrary to what you might think, German Shepherds are employed in various different roles throughout Law Enforcement.

For example, German Shepherds are often trained for the purpose of finding missing persons. This role, known as Search & Rescue, is often deployed in the wake of a large-scale disaster (such as an earthquake, tornado, landslide, or plane crash).

Together with their handlers, dogs will search for signs of survivors, navigating dangerous and unstable environments in the process.

For this reason, Search & Rescue dogs must be highly agile and able to adapt to different forms of terrain on the fly.

It is common knowledge that dogs trained in sniffing or detection work are regularly utilized in the search for illegal substances and explosives.

However, what you might not know is that they are used to detect organic materials, such as blood and wildlife scat.

German Shepherds make good police dogs as they excel at this line of work and don’t tend to develop weight gain. Due to their excellent sense of smell and are often deployed to help police officers find human remains and other signs of foul play.

Why do police use German Shepherds and not Pitbulls?

Lastly, as we will all be aware of, German Shepherds are brilliant attack dogs. Although this sounds intimidating, it is worth noting that they are only trained to attack on command or when provoked to do so.

Likewise, they will stop when commanded by their handler and only bite when asked to.

This is one of the reasons why police use German Shepherds and not Pitbulls. GSDs are more responsive to commands and training, and will back down when asked in most cases.

These well-trained dogs rarely prove a risk to law-abiding citizens, only criminals, and suspects on the run. Through rigorous practice, they gain the ability to assess a situation and react accordingly, even if their handler is not currently present.

To attain this elite level, they must pass regular obedience tests, proving that they are capable of following their handler’s commands without failure.

Did You Know: GSDs are used as cadaver dogs and can detect dead bodies just a few hours after death.

Do police dogs have to be German Shepherds?

Whilst German Shepherds have all the traits for making good police dogs, they are not the only breed used by police.

Police dogs do not have to be German Shepherds, with other breeds used including:

Hopefully, after reading this article, you will have a new-found respect for your German Shepherd. Not only does your GSD make the perfect loveable, good-natured, and loyal companion, but behind that soft exterior lies a remarkably kind and gentle dog who would sooner perish than allow his beloved owner to come to any harm.

On the other hand, if you do not currently own a dog and are thinking about getting a puppy in the future, perhaps this article will convince you to take a look at GSD’s as a potential option.

Although police and other working-type breeds are sometimes seen as scary or intimidating, they have incredibly strong bonds with their owners and are often great companions for children.

With their high level of intelligence, large stature, and beautiful temperaments, is it not hard to see why German Shepherds are used by police organizations around the globe who will choose this breed as their primary working dogs.

More about the GSD breed below.