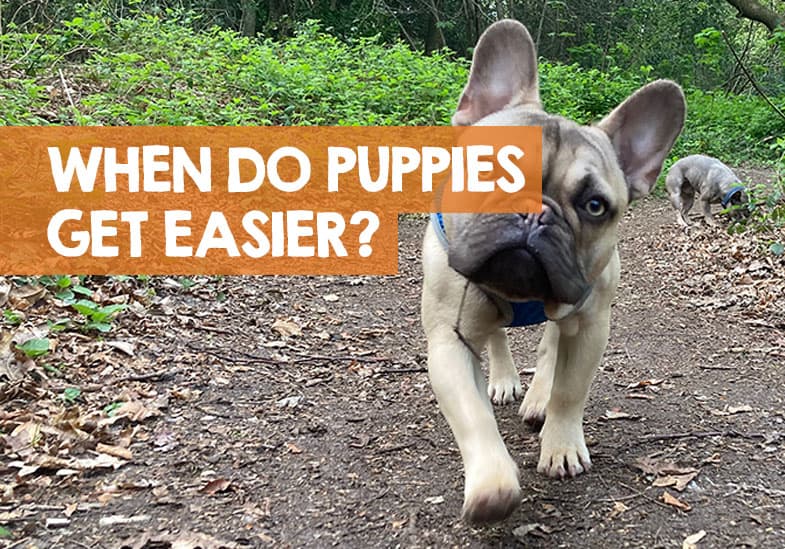 You’re probably here because, like many other new puppy parents, life with your new furry family member isn’t going as you expected. I won’t lie, having a puppy is exhausting and many owners experience what are called the “puppy blues”.

Please don’t worry, it is perfectly normal to regret getting a puppy, but there is hope in sight! Read on, with a short answer first, following by the detail to help you survive the puppy stage.

When do puppies get easier? In my personal experience puppies get easier to look after at around 10 months. By this point they should be toilet-trained, with chew and bite less, and hopefully sleep through the night. Much of this change will be the responsibility of the owner and their training routines.

However, don’t let your guard down completely. Puppies can still be very manic up to 18 months of age and will still be very over the top until this point in time. It’s how you manage and deal with it though.

I promise you; puppies do get easier to deal with… here’s all you need to know.

When do puppies get easier to take care of?

Many puppies will start to get easier to deal with between 4 and 6 months of age. But it is a progressive ladder of development so don’t expect it to suddenly be easier overnight.

That’s why I initially said 10 months… I have always found my puppies a lot easier to care for at this age. But the earlier ages of 4 to 6 months is when things start to get easier.

The reason it will start to get easier at this age is because puppies develop better control over their potty habits during this period. Plus, they’ll can be fully crate trained at this age, meaning they’ll can get used to sleeping alone without causing chaos.

But there’s still a lot of work to do… you still might not be able to get your life back after getting a new puppy. And as I said, it is perfectly normal to regret getting a puppy?  In fact, do you know there’s a term to describe these regretful feelings?

Having a puppy is exhausting: here’s how long it gets before it’s easier

If you’re a new puppy parent, you probably imagined starting life with your puppy was like what you saw in the movies — the happily-ever-after kind of living arrangement.

Then reality sets in.

The puppy you brought home to add meaning and happiness to your life is slowly turning out to be the thief of joy you never had.

Having a puppy is exhausting.

You may think there’s no silver living, but if there’s anything I’d want you to take away from this article, it’s this: raising a puppy does get easier with time.

When your adorable furry friend is 4-6 months old, managing them won’t be as difficult as it is during the early weeks of bringing them home.

Why four to six months? You may ask.

Well, that’s because the worst nightmares for almost every puppy parent happen when a pup isn’t yet 4 – 6 months old. Here’s what I’m talking about:

So, it’s safe to say that things get much, much better when you put in the effort to ensure your new pup:

But even as you focus on these three, make it a priority to get your puppy on a routine and consistently train them on good manners. This will ensure you have less headache managing your pup even before they hit four months.

If you don’t crate train your fur baby as soon as you bring them home, they’ll suffocate you with their constant whining for attention day and night.

As I mentioned earlier, it takes almost six months for a pup to be fully crate trained.

In the beginning, have the crate (make sure it has comfortable beddings inside) in your room when it’s time to sleep so your pup can feel secure knowing they are in the same room with you at night.

Once you notice they’ve grown fond of the crate as their favorite sleeping den, you can permanently move it to another area of your choice.

When its daytime, place them inside the crate for short periods. Be sure to fill it with their best toys and special treats your pup doesn’t get as often. That way, you won’t have a hard time making them stay in the crate when you have other things to do in the house.

I guess you’ve heard this a million times, but I don’t mind repeating it one more time.

Puppies are routine-oriented creatures. They behave well when there is order in their day-to-day life.

So, what does that mean for you?

You must introduce your new pup to a routine as soon as they come home. A routine, in this case, means scheduling their feeding time, exercise/play time, potty time, and sleeping time.

There’s no fun dealing with an uncontrollable puppy that’s stressed out because they don’t know what to expect when they wake up.

No one prepares a new puppy parent for the stress that comes with handling their pup’s inappropriate potty habits.

That’s why more than anything, you must have a strict feeding routine for your pup. You’ll be able to predict when they’ll need to pee or poop.

Make sure your fur baby relieves themselves at the same time, same place every day after their meal. Also, reward them whenever they do the right thing.  You’ll make great progress in the potty-training process.

All in all, make peace with the fact that no puppy adopts proper potty behaviors overnight. It takes 4-6 months for a pup to fully control their bowel and bladder. Until then, expect toilet accidents to happen.

Introduce your little canine friend to training so you can lay the right foundation for proper manners early enough. Plus, be consistent with training, so you’re pup eventually fully understands what you expect of them.

The goal of training is to make your pup familiar with instructions. When you’re consistent, you’ll be able to deal with those annoying behaviors like a pro!

The teething phase, which often ends when a pup is six months of age, is one of the most dreaded parts about puppy parenting. That’s because your adorable fur baby turns into a little monster right before your eyes.

A pup that’s going through teething tends to chew and bite anything they find.

That said, correct unwanted chewing and biting behaviors as soon as you spot them. Make sure there are lots of assorted chew toys in your home so that your pup has plenty of alternatives to chew on.

And most importantly, be consistent in issuing commands to stop your pup from pursuing the destructive chewing behaviors that annoy you.

Another thing to also mention is neutering. There is some belief that neutering and spaying can calm down puppies. Many vets won’t do this until a puppy is nearer to 9 months though.

Is it normal to regret getting a puppy?

Yes, it is normal to regret getting a puppy, I think this happens to all new owners who’ve not owned a dog before.

Raising a puppy is anything but easy. It’s a full-time job. If you find yourself wishing you didn’t bring your pup into your life, you’re experiencing what we call the puppy blues.

That’s when the excitement of having a fluffy bundle of joy wears off after a few days, and all you’re left with is regret at getting a puppy.

Many new puppy owners get hit by puppy blues. You’re not alone. And no, you aren’t the worst puppy parent alive. It’s perfectly normal to have these feelings.

Truthfully, there’s no specific time frame as to how long puppy blues last. Everyone’s experience is different. But it mostly depends on how soon you are able to control the puppy habits that drive you nuts.

Take comfort knowing that the regretful feelings are only temporary. Soon enough, you’ll reflect on the nerve-racking times with a smile.

Don’t be afraid to reach out to a professional puppy trainer for better perspectives on some of the puppy parenting challenges you’re facing. It also helps to have a support system, particularly friends who are dog parents.

When you have a constant source of encouragement, you’ll slowly overcome the horrible feelings of regret… but please be rest assured: puppies do get easier.

At what age are puppies the most difficult?

I believe that puppies are the naughtiest at their most difficult stage of 2 to 3 months old. They are not fully potty and crate trained. They will want to roam the house, chew your shoes, and destroy everything in sight!

At what age do puppies start settling down?

Puppies tend to be calmer when they are around six months of age. That’s when they’re almost approaching maturity.

At what age are puppies the naughtiest?

A puppy is most naughty when they’re going through teething — between 3 to 6 months of age.

The frustrations of raising your new pup are more than the beautiful moments you anticipated, and all you may be thinking about is when things will get better. If this is your situation, you’ve come to the right place.

It might not seem it now, but puppies will get easier.