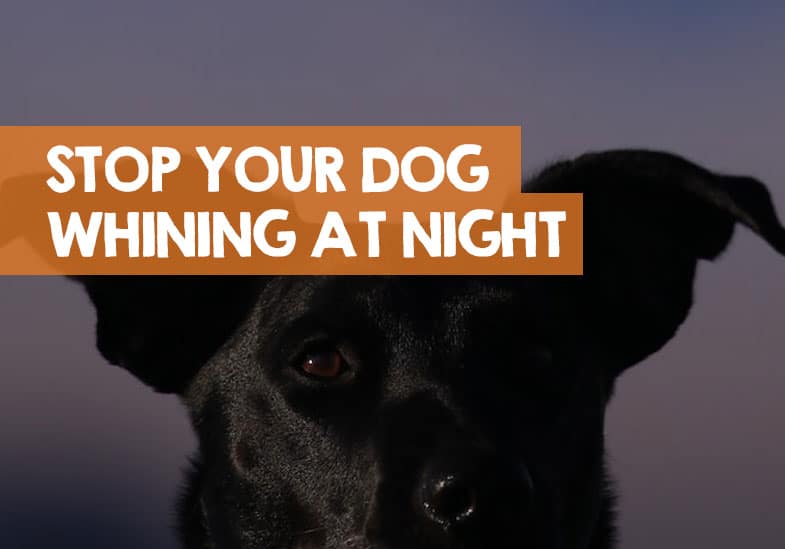 We all cherish a good night’s sleep. But if you have a dog who serenades you after dark with a series of whines, the night might be something you dread. It’s not just you though, there are also concerns over how a dog whining at night will impact on your neighbors.

There are some things you can do to stop a dog whining at night which I’ve detailed below. These are followed by me also explaining why your dog may be crying at night in the first place.

How to stop a whining dog at night

Thankfully, there are solutions to night time whining. But to tackle the late-night whining problem, you first need to know what triggers it.

While it may seem like your four-legged companion cries at night for no apparent reason, there’s always something triggering the habit.

It can be any of the following reasons:

It sounds simple I know, but if you can identify why your dog is whining at night, you’re already halfway there to stopping it.

Now that you know your dog’s whining at night isn’t without a cause, let’s explore seven useful tips to help you resolve this problem of bedtime hyper-ness.

1. Take them to the vet for a check-up

You must first rule out the possibility of a health issue being the trigger for your dog’s constant whining at night.

Think of excessive whining as a symptom of an underlying medical issue. Even when dogs are ill, they will rarely tire of barking and whining.

If you don’t treat the health problem, the symptom (whining in this case) will only persist. And other solutions won’t work.

So if your dog is unwell, the whining will go on every other night until you take them to the vet.

Sickness-related whining at night is usually prolonged and has a deeply distressing tone to it. Plus when you notice other subtle signs of illness during the day, that’s a cue you need to head to the vet.

2. Crate train and potty train, if you haven’t already

If you don’t plan on sleeping with your dog every night (that’s great since it’s not even recommended), introduce them to crate training soon enough.

With crate training, your dog will cry for a while but will eventually get used to spending the night alone and not whine out of loneliness.

It’s a good idea if your dog is still a newcomer to your home. The whining at night may be because they’re struggling to adjust to their new environment.

You can start by bringing the crate over to your room. That way, you’ll kill two birds with one stone. How so?

However, if your dog is still whining at night and it persists even after pouring your heart into crate training, consider speaking to your vet.

As for potty training, ensure that your canine pal does their potty business before entering their crate. Unlike puppies, adult dogs can go the whole night without needing a potty break — but only if they relieve themselves right before bedtime.

Also, avoid offering them any food or water when their bedtime is fast approaching.

If you’re a puppy parent, it helps to prepare yourself psychologically that toilet breaks at night are unavoidable. Your little furry friend will likely wake you up a few hours after bedtime (and probably more than once) because they want to potty.

To stop the whining at night extending until the morning, head over to their crate if the crying doesn’t disappear after a few minutes.

Even better, set a potty break alarm so the whining doesn’t catch you off guard.

And it’s best not to be too chatty with your dog during these nighttime toilet trips. Conversations can build excitement, and your dog may start acting up once they return to their crate.

4. Exhaust all the pent-up energy in the evening

Before taking your dog to bed, it’s advisable to give them a proper “workout.”

A dog that doesn’t have an active evening will be up at night whining since they want you to help them utilize the excess energy.

If you keep your dog busy with evening games that involve a lot of movement, they will be super exhausted by the time you take them to sleep. Here are some tips you can follow to tire your puppy out before bedtime.

Your dog will sleep soundly at night rather than go on a late-night whining session. Don’t give in and let him sleep in bed with you!

5. Be consistent with their night routine

Consistency is everything, especially with our canine companions. This is the key if you want to stop a whining dog at night.

If you are consistent in your approach, it helps them feel at ease, so they won’t have reasons to make a fuss at night. And it’s the simple things that count.

Tuck them to bed at the same time every day. If they like to sleep with a specific toy or rug in their crate, honor their wish even before they ask (through whining, of course).

If you usually switch off the lights in their sleeping spot, keep it that way every night.

6. Don’t give in too easily when the whining starts

I know. Telling you to ignore your canine pal’s heartbreaking cries, especially if you’re a new dog parent, sounds harsh.

But the truth is, that might be the only thing you need to do for you to enjoy a peaceful night. Our four-legged pals are good at reading reactions and drawing crazy conclusions.

If you’ve run a checklist in your mind and confirmed you’ve sorted your dog’s needs before tucking them in bed, for example

…….. then you have no business showing up at their crate immediately the whining starts.

The moment your dog realizes you always avail yourself when they start crying, they’ll automatically think your presence is the reward they get for whining at night.

So, ignore them first. If the issue isn’t that serious, they’ll doze off after a few minutes of crying.

7. Try to minimize the distractions

Another tip you can try to stop a dog whining at night is to keep your TV sounds low if you’re still up hours after taking your dog to bed. Loud sounds can interrupt their sleep, leading to unnecessary whining – and barking at the TV.

And remember to close the curtains in their sleeping area. That way, your canine friend won’t feel the need to check out and whine at the animals scampering outside.

Why does my dog whine for no reason at night?

For starters, your dog doesn’t whine and bark for no reason. There’s always a trigger. Your dog might be sick, bored, lonely, wants your attention, needs a potty break, or there’s a distraction.

Should I ignore my dog crying at night?

Yes, you can. But only if the whining is purely an attention thing, as explained earlier. Your dog will tire eventually, and possibly even get a sore throat – but it will take hours to get to that point.

How do I force my dog to stop whining?

While you can’t force your dog to stop whining (since they’re expressing a need while doing so), there are several ways to address the problem.

You can take them to the vet for a check-up, crate train and potty train them, stick to a routine, eliminate distractions, tire them out before bedtime and sort out their potty break request.

So, how can you stop a whining dog at night?

There are plenty of solutions to help you resolve your dog’s whining habit at night. You can tire them out every evening, ensure they are well crate-trained and potty-trained, ignore the whining, take them for a checkup, and maintain a consistent routine, among others.