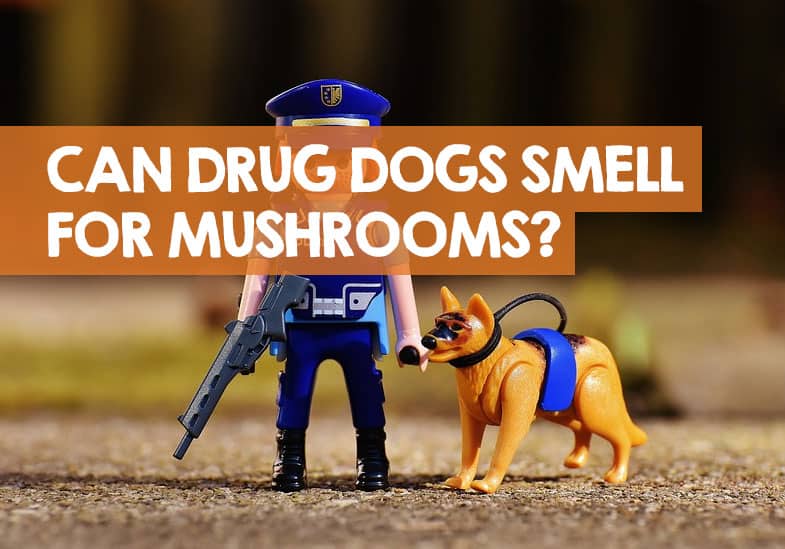 Dogs have 300 million olfactory receptors in their nose. This is what gives them such an amazing sense of smell, estimated to be 10,000 times more accurate than us humans. Their sense of smell coupled with their ability to be trained, makes them a key tool in the arsenal of law enforcement, being used to smell and sniff out drugs.

You will commonly see crime fighting pooches working at airports, festivals, or with police handlers to help sniff out a wide range of narcotics. But given the variety of drugs in the modern world, can drug dogs smell mushrooms, in particular spores and psychedelic ones?

To find out, I spent some time watching videos and reading articles by professionals who work with sniffer dogs. It was interesting to find out whether dogs can detect mushroom spores, and how the police train them to sniff them out. Here’s what I discovered…

Drug dogs can smell mushrooms, but whether they have been trained to sniff them out and alert their police handlers is another matter. It’s unlikely and uncommon for police and airport authorities to train their drug dogs to detect for mushrooms.

The bottom line is, police dogs can smell anything they have been trained to. For example, research published in 2019 found they dogs can accurately sniff out cancer in blood. If dogs can smell cancer cells, they can certainly smell mushrooms.

Are drug dogs trained for mushrooms?

But whether drug dogs are trained for mushrooms is another matter.

The reason being, it takes effort to train a dog to detect drugs, with patience and time needed until the dog consistently alerts to the drug correctly.

There’s also the consideration that training a police dog to smell mushrooms is a potential waste of resources. Given the demand for certain drugs and their impact on society, it’s fair to assume that the majority of police sniffer dogs would be trained to smell for amphetamines, cocaine, and heroin.

Did You Know? There’s a lot of confusion and debate on whether dogs are able to smell edibles. See what you think.

Based on my research, I would conclude that it’s unlikely that most drug dogs have been trained to sniff out mushrooms. There will be some that have been of course, by the vast majority probably not.

If they were trained, they would make a great job of it. After all, dogs are trained to sniff out truffles underground, which are a kind of mushroom.

Police dogs might still detect the smell of magic mushrooms

But that doesn’t mean that police dogs won’t smell and alert on magic mushrooms.

For example, I found a news report on the Irish Times from 2009

“Customs sniffer dogs stopped almost €20 million worth of drugs being smuggled by sea, air and post into Ireland last year. The dogs also stopped would-be users or suppliers sneaking in a punnet of magic mushrooms worth €90 and six hash cakes.”

The report doesn’t detail whether the dogs were trained to smell for magic mushrooms. I expect they probably weren’t but could have alerted on a drug they were trained for that the users had cross-contaminated the mushrooms with.

Did You Know? Dogs have a such an amazing sense of smell that they are said to be able to sense when women have periods!

Dogs can smell out and signal for anything they are trained to do – particularly clever ones like German Shepherds. If police or airport wanted to train their sniffer dogs to smell for mushrooms it would require the following process:

In the training game, actual drugs are used, but incredibly low amounts used in training due to their amazing sense of smell. Dogs are trained to locate the smell, sit down and point with their noise where it is.

Did You Know? Beagles have long flappy ears to help them smell better. As they walk, their ears sweep the floor, kicking up scents towards their nose. Find out more about this amazing talent Beagles have for sniffing out odors.

Given that we now know that is it possible for dogs to be trained to smell for mushrooms, plus how powerful their sense of smell is, then of course they could smell psychedelics. But, again, it comes back to the argument of whether they have been trained to do so, given the importance of other narcotics to police and customs.

I would imagine that if they had been trained to smell out mushrooms, then they could also be trained to detect the difference between psychedelic mushrooms containing psilocybin and normal ones.

The reason I believe sniffer dogs could make this distinction is because they can separate odors that are mixed up together. For example, when a human smells stew, they just smell stew. When a dog smells stew, he can differentiate between the odors of all the ingredients mixed in together.

This shows the power of a dog’s sense of smell, so it stands to reason they would be able to smell psychedelic mushrooms versus non-narcotic types.

Handy Hint: Despite what many criminals think, putting substances into vacuum packed sealed bags will not be dog proof. Find out why drug dogs can still detect through vacuum seals.

Whilst most probably aren’t trained to sniff out mushrooms, that doesn’t mean they won’t smell them, given how some can also alert on unusual odors.