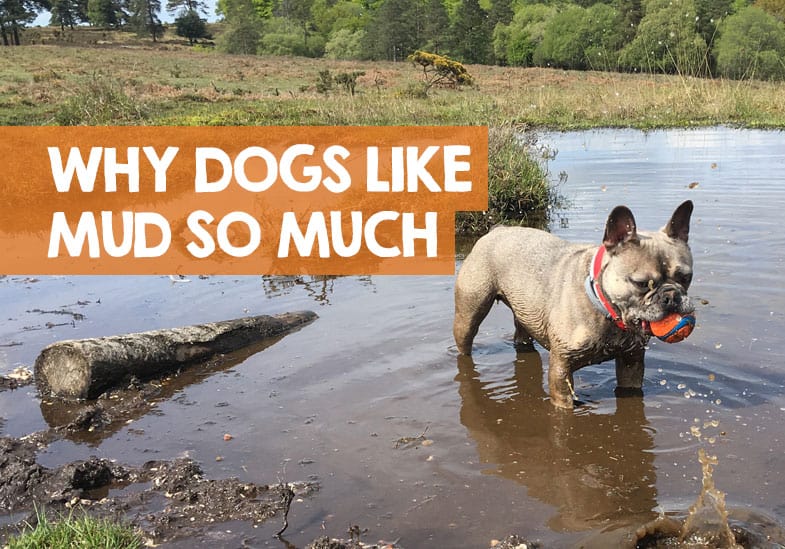 There are some things I notice whenever I go into the forest with my dog in the winter. Firstly, my dog loves mud. He will love to roll in mud, sit in it, and even progress to eating it. Our family call him Bruce the Bog Trotter when he does this… we don’t enjoy having to bath him after!

But why do dogs love mud so much, be it rolling in it or just having a sit down? It can be muddy water, the park dam, a puddle or the duck pond. I wanted to get to the bottom of the issue, so hope my research below helps you – here’s the short answer first.

Why do dogs like mud? Dogs like mud as it has a cooling effect, they can lie in mud or roll about in it to cool down. Dogs also play in mud when they’re bored or get excited and want to investigate smells. An instinct to hide their scents is also why reason dogs like to roll in mud so much.

That’s the short answer, I’ve detailed more reasons why dogs like mud so much lower down the page. Bottom line is though, there’s something about mud and dogs (and children to be honest) that you can’t seem to separate.

Let’s talk about why mud is such an attraction for dogs and what you can do to avoid it becoming a problem for you.

Why do dogs love mud so much?

Whether you like it or not, if your dog eyeballs a puddle of mud on the path ahead he’s going to make a beeline for it. There’s a number of reasons why your dog simply can’t resist mud.

When your dog gets overheated and there’s mud nearby, he’s going to roll in it. Mud is known to cool down your body and your dog knows this instinctually.

Mud is moist and it feels cooler so a coating of mud will help to cool your dog down.

2. Your dog needs some excitement

Remember when you were a kid rolling in the mud? It was exciting and fun. So, when your dog is looking for some fun and excitement he’s going to run through that mud. He’s going to roll in it and he’s going to lie in it.

Nothing quite beats a good pile of mud for your dog to chase away the boredom!

3. Your dog is masking his scents

Dogs also like mud due to how it has an ability to tune into their instincts. Wolves have been known roll in mud to mask their natural scents during a hunt.

While your dog may not need to go hunting anymore, his instinct still tells him that mud equals masking his scent. He can’t help himself but to roll in that mud.

Did you use to squeal in delight whenever your puppy ran through mud? He looked so cute and then you would reward him with a bath. All that laughter and cooing plus a dunk in that bath tells your puppy that rolling in mud is good behavior.

When he becomes an adult dog, his habit of running through mud is based on learned behavior.

5. He prefers a more natural smell

Do you tend to wash your dog often? If you’re using your favorite lavender-scented soap or the baby’s mild shampoo, your dog may not like the perfumed smells. The same goes for dogs who go to the pet groomer often.

They come back smelling like roses and they don’t like it. So, to get back some of their natural smells, they dive into a pool of mud. If they get to choose, they’ll pick mud over talcum any day.

For some dogs, they love a mud bath and it’s far more preferable to your bathtub.

6. It tastes so good

If your dog is one of those dogs who like to eat mud, then don’t feel alone. It’s quite common for a dog to start munching mud or dirt and there’re some good reasons they’re doing it. Here’s a shortlist, followed by a little more detail.

It could be because old food or a dead bird has ended up in the mud. A dog may eat mud because they’re stressed or bored.

But they could also be lacking some vital nutrients and minerals. You can read more about this particular and strange habit in this guide to dogs that eat dirt.

Show me a dog who doesn’t love a good romp in water. Most dogs will gladly dive into the dam or your kid’s play pool. My friend’s Great Dane is always in the pool and Labradors are known for wallowing in any water they can find.

Dogs associate water with mud or mud with water. Whichever way round, your dog is going to play in that mud puddle if he gets half the chance.

Be warned though, there can be some risks with this play, particular if you have a dog that likes to drink muddy water. Read more here about what to be wary of.

Handy Hint: On a muddy walk your dog might also want to carry a big stick all the way home. I decided to find out why dogs like to carry sticks like this, and here’s what I discovered.

How can I stop my dog liking mud?

Okay, I don’t think you can ever get your dog to stop liking mud. But you can train them to stay away from it. At least most times anyway. Here are some ideas for keeping your dog out of mud.

1. Keep them away from mud after a bath

This may seem obvious but sometimes we forget that our freshly groomed dog is going to head to that mud puddle in your garden as soon as he can.

You can either keep him locked up in the house until the mud puddle dries out. Or you can fill in the mud puddle with sand or rocks. The key is preventing your dog from having access to mud after being bathed or groomed.

2. Distract them with toys and games

Playing in mud is a game for dogs. But it’s a dirty, messy game so you want to keep it down as much as possible. Your other option is to distract your dog from muddy areas by giving them other games to play.

A good tug-of-war with his owner will tire him out before he thinks about heading over to the mud. You could also make sure he’s got enough toys to play with.

3. Use positive reinforcement to break a bad habit

With any bad habit your dog has, positive reinforcement is good way to help him break it. Running and rolling in mud could be considered a bad habit if he’s doing it too much.

Try telling him “No” in a firm but gentle tone every time he heads to the muddy area. He’ll soon learn it’s not acceptable behavior.

Reward him with his favorite treat when he stops heading into the mud.

When you and your dog have been cooped up all day inside the house because of rain, a walk in the park seems like a good idea. Which it is until you see all the puddles of mud on the path ahead!

So, either stay at home or walk around your neighborhood instead of heading to the local dog park. You can also keep your dog indoors until the puddles in the garden have dried up.

5. Give him a balanced diet

If your problem is your dog eating mud or dirt, then you may want to have him checked out with the vet. He could be lacking some vital nutrients or minerals and this can cause unnatural cravings.

Anemic dogs are known to eat soil to try and replace deficiencies in their body. Make sure your dog is getting all his required nutritional and mineral needs from his food.

Do you remember being a kid and running in the mud? I do and would get my ear chewed out every time I did that as my folks would go ballistic.

I kind of understand it now whenever my dog comes into the house after a good roll in the mud. Not only do I need to clean the floor, but I also have to give him a bath.

However, it’s hard to be too mad with your dog, as they don’t really understand the consequences and like the mud for some very good reasons.