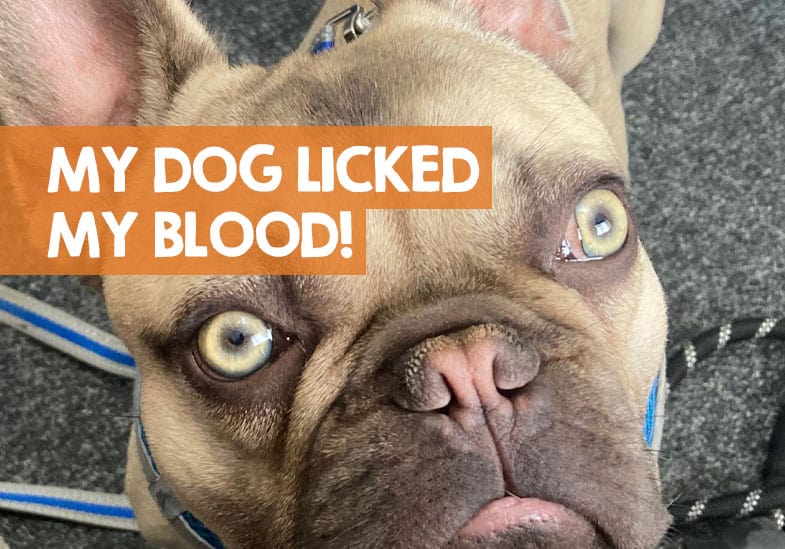 Dogs like to lick just about anything that has a taste to it. That could be their toys, other dogs’ butts, the feet of those they love, or your face. What is more disconcerting though is how dogs lick the wounds of humans.

If your dog has ever done this, you probably have two questions: one, can dog get diseases from human blood, and two, what happens when a dog licks human blood to your own health.

When dogs lick human blood, they are risk of contracting diseases including the human flu virus, SARS-CoV-2, mumps, a blood infection, or get a gastrointestinal upset.  Dog saliva can also infect human wounds with bacteria.

Whilst the risks of a dog getting ill from licking human blood, there still is a possibility it can make them ill. They risk catching diseases if the blood is contaminated with a blood-borne illness.

I’ve briefly touched upon what happens if a dog licks human blood, and I will explain that in more detail shortly. But first I wanted to explain why dogs lick wounds of humans  and can have a taste for blood.

Whether it’s blood dripping from your finger after a minor cut or a serious injury pouring blood, the dog will be interested. It will smell the blood, and naturally come over to lick at the wound.

It’s certainly a worrying sight for any dog owner since there’s nothing “cuisine-ish” about human blood. But one thing is for sure, dogs don’t have limits to what they can or can’t lick

Why do dogs like to lick human blood though?

Turns out, there are a few interesting reasons why dogs don’t mind licking human blood.

For starters, dogs know blood when they smell it as I explained. They often sniff it on their wounds whenever they have an injury, so the scent of human blood isn’t anything out of the ordinary.

And with their super sensitive noses, it’s no wonder there are blood detection dogs used by law enforcement to help locate crime scenes.

Dogs also lick human blood because their instinct tells them to. You see, licking bleeding wounds is the only first aid tip dogs know. They lick their own injuries because they are aware of their saliva’s healing powers. It contains pain-relief agents and anti-bacterial compounds called histatins that stimulate the production of healing tissues.

Your dog thinks a few slobbery licks on your bleeding wound can help you heal quickly. What they don’t know is that trick only works on their wounds, not on human wounds.

That’s not all. Your dog could also be licking human blood for the following reasons:

What happens if a dog tastes human blood?

Ever heard a myth that dogs can suddenly develop a taste for human blood when they taste it for the first time? Well, that remains just that: a myth.

There’s no scientific study showing that tasting human blood can make a dog feel bloodlust. So no, your dog won’t turn into a blood-thirsty monster when they lick your blood.

What happens if a dog licks human blood?

With that in mind, here are some of the health problems your dog risks experiencing if they lick human blood:

Human blood is like a cocktail of many things: minerals, nutrients like proteins, blood cells, hormones, salt, waste products, sugars, and a lot more.

Your dog’s digestive system can’t handle all these extras. When your dog licks human blood, they are ingesting a foreign substance that their system will have a rough time breaking down.

Your dog will likely develop a nasty stomach ache accompanied by uncomfortable symptoms like diarrhea, nausea, vomiting, or bloating.

Human blood isn’t always pure. It can be contaminated by disease-causing bacteria or viruses, especially if you have a disease.

Sometimes, these pathogens might still be present in your blood despite you not having any signs of sickness.

There are a couple of human diseases whose pathogens live in the bloodstream — for example, bacterial infections like Salmonella, Tuberculosis, and Methicillin-resistant Staphylococcus aureus (MRSA).

Research shows humans can pass these diseases to dogs.

“There are some illnesses you can potentially pass to your dog, causing them to become ill. These include things like salmonellosis, MRSA, and ringworm. Research indicates that dogs can sometimes contract human flu viruses, SARS-CoV-2, and mumps. However, they often don’t appear to become ill due to these infections.”

Sure, you might be healthy and not have bacteria in your blood. But when you have an open wound that’s bleeding, bacteria will settle on the wound surface.

It can be bacteria on the object that’s caused the injury or bacteria in the air. Yes, there are many harmful microorganisms in the air looking for a wound to attack.

Your wound can have more than one type of bacteria — and lots of them, for that matter. Wounds give bacteria all the nutrients they need to reproduce and multiply.

As your dog licks the blood in your wound, they are unknowingly taking in harmful bacteria into their system. Your dog will eventually become sick.

Ever had a small cut and licked a tiny amount of the blood oozing out?

If so, you might have realized the blood has a metallic taste. What you tasted was iron, often present in human blood (and in high quantities).

When your dog licks a lot of the iron-rich human blood, they may suffer from iron toxicity. It’s a potentially fatal condition since too much iron in your dog’s body damages the tissues.

Some of the symptoms of iron poisoning include rapid heartbeat, extreme fatigue, bloody diarrhea, drop in blood pressure, vomiting, and even seizures.

Don’t let a dog lick human blood from a wound

Just as your dog can get sick from licking your blood, you can also get seriously sick if you allow your dog to have their tongue all over your wound.

You see, your dog has bacteria in their mouth. It’s a balance of good and harmful bacteria. Their body has already adapted to this balance, so bad bacteria (the most common in dog saliva is Capnocytophaga canimorsus) can’t cause any harm to your dog.

However, C. canimorsus becomes dangerous if it’s outside your dog’s mouth — like on your open wound they have licked. Your dog’s saliva can make your wound prone to serious bacterial infection.

In rare cases this infection can cause death.

Handy Hint: Dogs are always curious of human babies and will want to lick them. Never let them do this as babies have weak immune systems and can get ill from a dog lick due to the bacteria in the saliva.

Besides infection, your dog’s licks can also slow down your wound’s healing process. So, no, dog licks are not helpful for healing human wounds.

ogs often put their mouths on pretty much anything, so they collect dirt from many places.

When they lick you, they will transfer germs to your wound, creating an unhealthy environment for healing.

Also, rubbing their rough tongue against your sensitive wound can open up parts of the skin that have already started healing. That means your wound’s healing will prolong if your dog constantly licks at it.

For this reason, it’s important for you to always wrap a bandage loosely around your wound.

And if you cut yourself, remember to immediately wipe any blood that’s dripped on the floor, so your dog doesn’t get a chance to lick it.

FAQs on my dog licked my blood

What happens if a dog licks human period blood?

Dogs are known to be able to sense a woman’s period. If they then go the next step and manage to lick human menstruation blood, then the risks outlined above also apply.

The dog could get ill.

It could be that they like the blood’s salty taste, they want to clean and heal your wound, they are investigating your health status, and they want to keep predators away.

What happens if a dog tastes human blood?

Truth is, nothing will happen. There’s no evidence showing a dog can develop serious human blood cravings when they taste human blood for the first.

Can dogs get diseases from human blood?

Yes, that’s right. As discussed earlier, there are certain bacterial diseases that normally spread to the human bloodstream.

A dog’s saliva for sure has healing powers. But letting your dog lick your wound is risky since they will introduce harmful bacteria into the wound.

My dog licked my blood once. My immediate reaction was revulsion. I needn’t have felt that way though, he was curious – and more importantly did not get ill.

Whilst dogs can get ill if they lick a small amount of human blood, it will be low on the possibility scale.