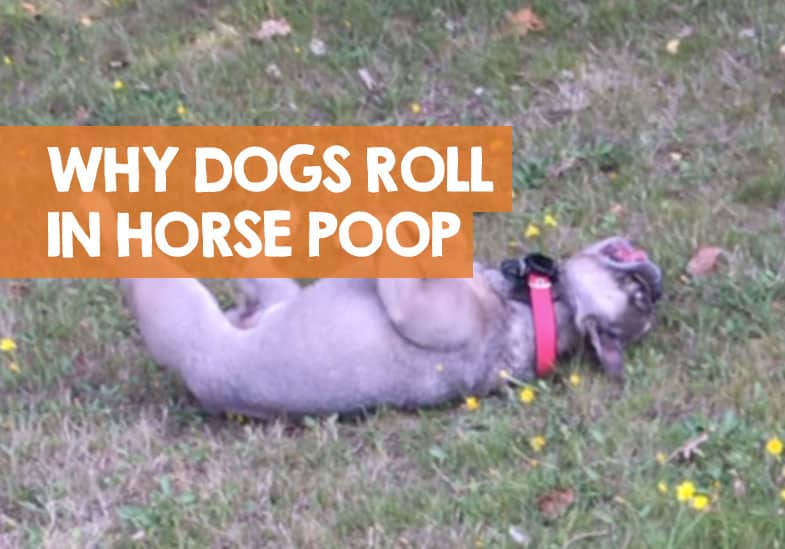 We’re lucky enough to live near a large forest where various animals roam free. It makes for some amazing walks with our dog Claude, but there is one stinky consequence; our dog loves to roll in horse poop and manure left by the wild horses.

I’ve always wondered why dogs roll in horse manure, because quite frankly I can’t think of anything more disgusting. It stinks and makes my dog reek of smells I do not want in my house.

To get the bottom of issue to see if I can actually stop it, I’ve done some research into what scientists say. In this helpful guide I will explain what I’ve learned about dogs rolling around in horse poop, the theories behind it, and some advice on preventing it.

Why do dogs roll in horse poop?

The short answer is that we don’t actually no for certain why dogs like to roll in horse poop. Scientists have never been able to exactly pinpoint the reason for dogs rolling in the horse manure, but there are some theories that are more likely than others.

I’ve listed those theories below, starting with the one that is probably the most likely reason why your dog rolls in horse manure.

1. To mask their scent to help with hunting prey

Now obviously dogs don’t have to hunt anymore because they always get their dinner given to them by us caring owners. But it wasn’t always this way for their ancestors who had to get their own meals!

One of the more likely theories behind horse poop rolling is that dogs do it to camouflage their scent to help them hunt prey. With it of course, being an instinctive action from their past rather than serving any practical sense in the modern age.

If you can imagine, your dog (or wolf) would be able to creep up on their prey a lot better if their smell was disguised with some stinky horse poop.

Dr Stanley Coren PhD shares this theory on the Psychology Today website when he says:

“The explanation which makes the best evolutionary and adaptive sense is that this stinky behavior might be an attempt at disguising the dog. The suggestion is that we are looking at a leftover behavior from when our domestic dogs were still wild and had to hunt for a living.”

This makes total sense to me because you can picture an antelope smelling a wild dog and running away. However, if that dog in pre-domestication times was covered in antelope poop smell, it’s the perfect disguise – as Dr Coren says: “for this reason wild canines learned to roll in antelope dung or carrion.”

You might think that the smell would make dogs worse hunters because they cannot track as well with their sense of smell being affected, but according to another researcher, that’s not the case.

Simon Gadbois (view profile) from Dalhousie University in Canada has conducted studies with wolves, coyotes, and domestic dogs to see how they track in the wild. He told the BBC that one of his prized sniffer dogs loves to roll in beaver poop and:

“You would think it would interfere with her ability to smell and track other animals, but remarkably it did not affect her performance one bit.”

The second most likely reason why dogs roll in horse poop is simply because they like it. Just because we think the smell is terrible, that doesn’t mean they do!

Dogs have an insane sense of smell which is said to be between 10,000 and 100,000 times better than ours. We have around 6 million smell receptors in our nose, dogs have around 300 million… so just think how appealing that horse poop must smell to a dog!

Handy Hint: Talking of weird dog behavior that we can’t get our head around, what about the reasons why they love to eat goose poop so much?

3. To communicate with the pack

The idea is that by rolling in horse manure, a dog (or wolf) will return back to the den and the rest of his pals will be able to smell that he found something interesting.

Wolves and wild dogs weren’t just hunters, but also scavengers and would eat poop to get nutrients from other animals. You can imagine the wolves being able to smell their peer and then follow the scent back to find the source of the food or prey.

Pat Goodman, a research associate and curator of Wolf Park in Indiana says this:

“When a wolf encounters a novel odor, it first sniffs and then rolls in it, getting the scent on its body, especially around the face and neck. Upon its return, the pack greets it and during the greeting investigates the scent thoroughly. At Wolf Park, we’ve observed several instances where one or more pack members has then followed the scent directly back to its origin.” (view source)

4. As stimulation and for kicks

Another theory from the Dr Stanley Coren is that dogs like rolling in horse manure because they get a kick out of it! Here’s what he says:

“For human beings our dominant sense is vision while for dogs it is their sense of smell. Dogs, like people, enjoy sensory stimulation and may well be prone to seeking such stimulation to an excessive degree. Therefore, I believe that the real reason that canines roll in obnoxious smelling organic manner is simply an expression of the same misbegotten sense of aesthetics that causes human beings to wear overly loud and colorful Hawaiian shirts.”

Dr Coren isn’t the only dog specialist to have this theory. Muriel Brasseur of the Oxford Animal Behaviour Centre told the BBC the following:

“I suspect they get a great big rush of dopamine, a neurotransmitter involved in reward and pleasure. If it is a behaviour from their evolutionary past that was linked to survival, it could be reinforced by being extremely good fun.”

5. To show off to other dogs

One theory I really like is that dogs roll in horse manure in order to show off to other dogs. Kind of like how we might wear aftershave and perfume, dogs know that stinky smells will possibly attract other dogs or even make them jealous!

I can just imagine my own dog Claude rolling in the smelly stuff and then thinking:

“Hey, check me out other dogs, I got some really cool smelly poop near where I live. You want to be like me and live near me, cos its’ really smelly and amazing!”

6. To leave scent behind and be territorial

And finally, it could even be that your dog likes to roll in horse poop to leave his own scent behind. It’s very similar in fact to how dogs will urinate as a signal to others.

How to stop your dog rolling in horse manure

If you want to stop your dog from rolling in horse manure then you could try some of the following tips, but I wouldn’t hold your breath with them working – if a dog wants to roll in the poop, you will have a hard stopping him!

Dogs do the funniest things, much of which we can never truly get our head around. Rolling in horse manure being one such thing! To date, we don’t really know why they do this, so all we can is make educated guesses.

Talking of stinky things, here’s some other things you might find interesting about your dog.