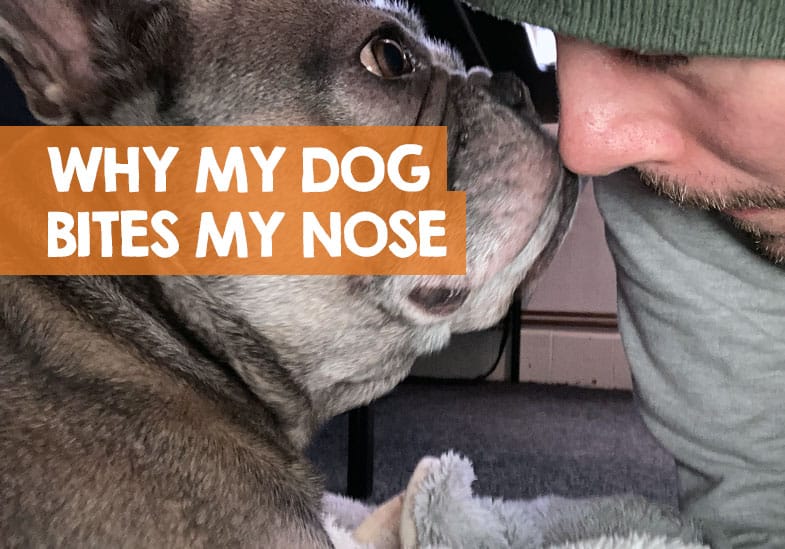 Has your dog been gently biting your nose recently? You know, like those little cute nibbles and chews they do with their front teeth, sometimes combined with little lick too?

It’s something my dog does too, but I’ve never known why. That was until this week when I spoke with a dog behavior specialist, and here’s what they told me, plus my own research and observations.

Why does my dog bite my nose? Your dog bites your nose gently to get attention. It can also be because they want you to play with them, and they know the game starts with a little nose nibble. It could also be teething behavior in young puppies.

Some owners also describe these little nose nibbles as love bites from your dog. As in, their way of showing you love like they might with a puppy or sibling.

Whilst it might be cute having your dog nibbling you on the nose, a fully grown Alsatian doing it may not be so cute. In fact, it could become downright dangerous, particularly if you have young children in the house who might cause a reaction in the dog.

With so many reasons causing your dog to chew you on your nose, I’m going to dive deep into this topic. So, read on and discover why your dog does it and some tips on how to stop this (mostly) “love” biting behavior.

Why does my dog like to bite my nose?

There are a number of reasons why your dog appears to be play biting or licking your nose like this, all of which are detailed below.

1. Your dog bites your nose to initiate play

Have you ever noticed how dogs like to bite at each other’s necks and ears, but never do it hard enough to hurt? Well, this is very similar to what your dog is doing when he starts nibbling your nose with his front teeth.

Dogs do this, in the main, to initiate play. It’s something that they learn as puppies, with little bites often the way to start a game off or bring the other participant to submission.

2. Your dog bites your nose because of teething pains

If your fur-baby is still a young puppy and has starting to teethe, they’re going to look for anything to relieve the pain. Instinct drives them to chew on whatever they can find (think of the human baby who will chomp on a teething ring, your finger, a hard biscuit – the list goes on).

Your puppy will chew on table legs, toys, bones and if they discover it, your nose! And your puppy will also chew your nose if you cuddle him often or let him lay on your lap or chest. If it’s in sight, it’s fair game.

Is it a good idea to let your nose become your pup’s teething ring? No, of course not. Encouraging dogs to get too close to faces could lead to problems further down the line. If you haven’t got a teething toy, here’s one on Amazon.

This is only relevant to puppies that are still teething, which typically be over by 8 months of age at the most.

There’s also the consideration at this age, that puppies are starting to interact with the world through their mouths and noses. A young dog might lick and bite at your nose because he’s exploring and thinks it’s one way of talking to you… or figuring you out!

3. Your dog bites your nose to get attention

Hey, give me some attention!

Have you noticed when your dog thinks it’s time for his owner to pay him some attention, he always finds ways to get it? Whether that’s peeing on you (yes, this does happen), barking, or bringing you a toy, they have their ways!

And biting your nose is just another way for your dog to get that attention. It could be that he or she is getting bored or needs some extra attention.

Aside from nose nibbing, other times a dog will grab your attention will be by using the following sneaky tactics:

4. Your dog bites your nose when things get out of hand

Okay, now you’re giving your dog all the attention he wants, and you decide to play a game of “rough and tumble” on the lawn. This is so much fun until your dog suddenly bites you on your nose.

When dogs get excited, they forget what they’re doing and biting your nose could happen because it’s simply happens to be there. But it can become a bad habit every time they do get excited.

Your dog gets excited when you come home, and they bite you on your nose. They’re excited when your baby nephew comes to play. And nips him on his nose. Not such a great idea especially if baby nephew’s starts to cry and mom gets mad (rightly so).

Handy Hint: Here’s what you can do about a dog that gets jealous about a new baby coming into the home.

Excitement levels in your dog could make them do things they shouldn’t do and one of them is biting noses.

5. Your dog bites your nose because you’ve encouraged it

If you own a small breed dog, biting or nibbling of your nose may seem harmless and you may actually like it. When it happens, you reward him either by giving him treats or cooing him with loving words.

But, if you encourage this behavior from young and your dog thinks it’s normal, it may get out of hand. Other people may not appreciate it so much when visiting you especially if your dog is a slobbering Great Dane.

Nibbling noses could turn into some nasty bites especially if the dog feels he’s not getting the attention he wants. Or the excitement levels get too high.

It’s very tempting to reward your dog for this kind of behavior especially when its gentle nibbling and he’s doing it because he loves you so much. Or, as I already mentioned, it’s your pup’s way of interacting with you.

What do you do if your dog bites your nose?

It’s a good idea to teach your dog from young that biting your nose is not acceptable. It could become a dangerous habit and as its owner, you need to stop him from doing it.

Here are some tips to help you stop your dog from biting your nose.

It’s always a good idea to find a local dog trainer or animal behaviorist to help you with training your dog from young. You can also turn to these experts if it’s a habit your dog develops when they’re older.

These experts know all the tricks of the trade and will teach your dog (and you) the right behaviors through proper reinforcement training.

Teach your dog they’ll only be rewarded for good behavior. Every time they nibble or bite your nose, walk away from them. Avoid saying anything when they bite your nose. Simply get up and walk away.

Your dog will learn that biting your nose is not acceptable when you no longer respond to this behavior.

3. Give your dog toys and bones to chew on

Make sure your dog has enough toys and bones he can chew on. This is important from puppyhood as it’ll teach him to know what he’s allowed to bite. And it shouldn’t include your nose.

Toys and bones can be used to take his focus away from your nose. You could ensure they’re around at times when he’s likely to nip your nose such as when you’re playing a game of rough and tumble.

4. Give your dog the attention he needs

Your dog needs attention. They feel secure and loved when their owner acknowledges them. So, make sure you’re giving them enough of this by playing games, taking them for walks and giving them regular cuddles.

Of course, your dog needs to learn they can’t get attention all the time. But, by knowing they’re loved and cared for will help them stop using unhealthy habits to get your attention.

Little doggy love bites are nice to get but when it’s your dog nipping you on your nose, it can become problematic. I suppose it depends on why they’re doing it, as to how you react… but if you suspect it’s problematic, nip the nose chewing in the bud as soon as you can.

If you don’t, puppies will grow up thinking it’s acceptable behavior, and there will be times when it’s absolutely isn’t.

Your dog’s mouth near your face is always a risk.