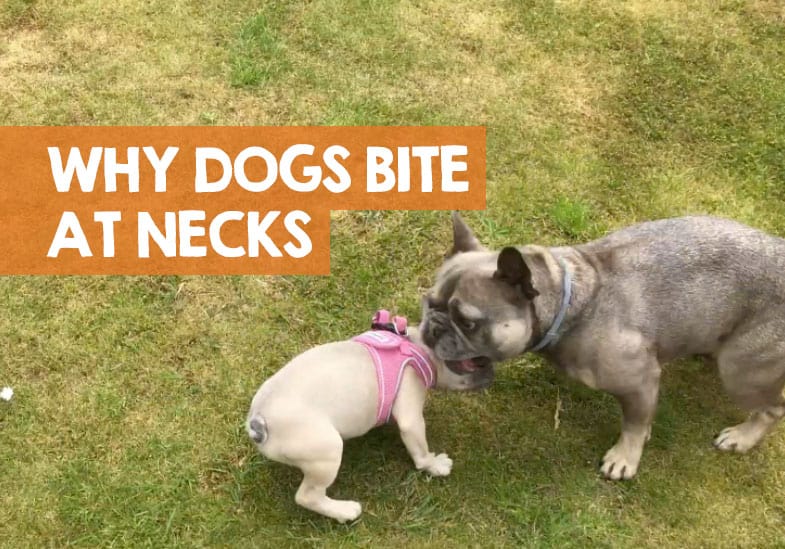 When two dogs are playing with each other, it can be hard to figure out whether you need to step in and stop what looks to be aggressive behavior. This is especially true if you find that the two dogs are grabbing and biting at each other’s necks when playing.

With the neck being an extremely sensitive area, you might be worried that a dog’s neck might come to harm – especially if you are worried that the neck-biting is done as a form of aggression. The good news is, you probably don’t need to worry.

Why do dogs bite each other’s necks? Neck-biting is a fairly normal behavior in dogs and is usually means a sign of play. However, you should also be aware that neck-biting in dogs can, in some cases, be a mode of aggression so watch for tell-tale signs both before and during play.

The key in understanding why your dog might be biting another dog’s neck (or vice versa) is being able to pick up on subtle behavioural cues and body language that might indicate how the dog is feeling.

Today I wanted to help shed some light on what it means when a dog puts its mouth around other dog’s neck. It includes my view on whether you need to make a distinction between a little mouthing or nibbling and grabbing or shaking of the neck area.

It offers valuable insight into the reasons why dogs bite each other’s necks (according to what I’ve researched and found).

Is it normal for dogs to bite each other’s necks?

If you come across dogs biting each other’s necks, you can assume that it is for one of two reasons; playtime or aggression. It is entirely normal for dogs to bite at each other’s necks and providing it is playful, you should not worry.

Whilst it may be difficult to understand the difference at first appearance, an understanding of your dog’s body language will be able to help you tell the difference and decide whether or not it is necessary for you to intervene on the neck biting and grabbing.

The main way that dogs interact with each other is through play fighting. This is an important part of any dog maturing because it teaches them how to use bite inhibition, respect boundaries and helps them to understand when aggression is and isn’t appropriate.

Handy Hint: Dogs will also bite at each other’s ears during play which I explain in this other guide to ear biting behavior.

This is why more socialised dogs are easier to train, because they effectively learn their own ‘social’ skills from interacting with one another. Actions like chasing, wrestling, growling and neck-biting are all part of this harmless play.

It is easy to see when a dog is biting another dog’s neck as part of playtime by studying their body language. If both dogs appear to be smiling, leaning into the action, bowing to the other dog and appear to be ‘frolicking’ and ‘bouncing’, you can assume that any neck-biting is nothing more than harmless horse – or ‘dogplay’!

There are many reasons why your dog might be acting aggressively towards another dog. Some of the most common ones include feeling afraid, feeling territorial, being overprotective over you or another human/dog or having misdirected aggression.

You can tell neck-biting between dogs is aggression-based by considering some of the following signs: the dog is repeatedly being mounted, the dog is being bodily held down and the dog seems to be getting bitten roughly.

Handy Hint: If the dog fight develops into something serious, here are ways you can break it up even if you’re alone.

Further to this, the dog being bitten may start exhibiting aversion tactics such as yelping, lying down, running to hide behind you or looking away from the other dog.

Many owners describe aggressive neck biting as a dog grabbing the other dog’s neck and shaking.

If you suspect a dog is being attacked, it is important to intervene immediately to avoid the risk of dogs getting injured. Do not step in between them though; many owners use the wheelbarrow technique where you grab your dog’s rear legs and pull them backwards.

Aggression and neck biting could be a result of:

If you see these signs of aggression and blood is evident on the neck or other areas of the dog, then you should look to separate both dogs immediately and work on correcting the behavior.

If you were wondering why a dog biting another dog’s neck during playtime isn’t a cause for concern, the answer is simple: it’s all about your dog’s intelligent ability to control the force of their mouth.

Indeed, the habitual biting behaviour in dogs is something that is rooted in them from a young age. A crucial skill that a puppy will pick up within their first 12 weeks (with the help of their mother and littermates) is something called ‘bite inhibition’.

Bite inhibition, essentially, refers to a dog’s ability to control the force of their mouthing.

Similar to babies, puppies tend to explore the world through their mouths. They’ll often engage in playfighting with their littermates, and it is through these formative, early days of playtime that they will learn bite inhibition.

They will be able to see from other dogs’ reaction how much biting is too much, and from there they will learn how to adjust the force of their neck biting in contexts like playtime accordingly.

By learning an instinctive skill like bite inhibition, puppies are able to do things like carry items in their mouth without breaking them and play with humans or other dogs without causing them any harm through biting, particularly the neck area.

They’ll learn to understand how to adjust the force in which they use their mouth depending on the context they’re in. For example, your dog will not carry a tennis ball in their mouth with the same force they use to chew a bone.

Consequently, if your dog is biting another dog’s neck as part of playtime, there is no need to worry about the other dog getting hurt.

This is because your dog will be utilising their skills in bite inhibition to ensure that even if they’re biting the other dog’s neck, they are not biting it hard enough to break the skin or harm them.

Handy Hint: Did you know that many people believe the bite force of a Chihuahua to be more than that of a Rottweiler, but just how true is this?

How to stop your dog from biting other dogs’ necks

If your dog is being uncharacteristically aggressive, it is important to take them to the vets immediately. Sometimes, a dog might start acting out or being more aggressive than usual as a result of an underlying health issue.

You can also try working with a dog trainer in order to curb some of your dog’s aggressive behaviour patterns to help them act more socially around other dogs.

As a temporary solution, it is worth trying to separate your dog from other dogs where possible and to have them wear a muzzle in public in order to prevent any harm coming to another dog’s way if your dog chooses to attack them.

The level of roughhousing, growling and neck nibbling involved can be both puzzling and concerning for a dog owner, as these behaviours are indicative of both a serious attack and harmless play… your dog might even start chewing at your nose for the same reasons.

There are many reasons why dogs bite each other’s necks. For the most part, it is nothing more than a bit of playtime for the dogs involved. However, it is important to be vigilant and to stay attuned to your dog’s body language just in case things turn nasty.

I frequently write about the behavior of dogs. Some of the following guides might be of interest to you.