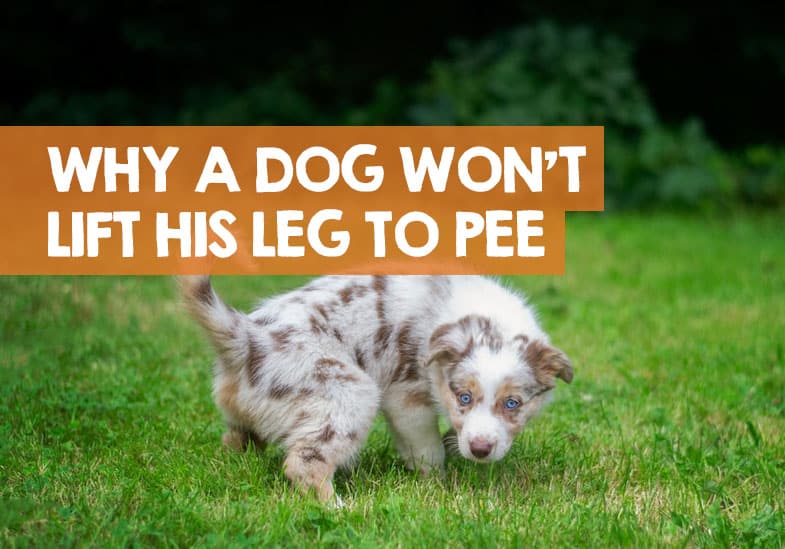 Like most dog lovers, you probably have the mentality that leg-lifting while urinating is a male dog’s thing, and squatting is for female dogs. If you’ve noticed your dog doesn’t raise his leg while urinating and instead squats or takes other weird peeing postures, you might be wondering why.

Reasons why your dog does not lift his leg when he pees could be because he has been neutered, perhaps he hasn’t been trained how or has the instinct, or maybe leg-lifting isn’t his preferred peeing style, and he isn’t dominant by nature.

Why your dog does not lift his leg to pee could be for a very different reason though. Below I will explain why this happens as well as how you can get a male dog to lift his leg to pee. It also explains why in some circumstances your dog will be lifting his leg but not peeing at all.

Male dogs and the lifting of legs to pee

Let’s talk about male dogs and their habits in the peeing department. We all expect that since they bark the same, walk the same, yawn the same… they should all pee the same, right?

Well, no, not really.

It’s widely believed that male dogs must do the leg lift pose when peeing, and that it’s not normal for a male dog to squat to pee. Then the opposite being that only female dogs should squat when peeing.

If you’ve held this belief for a while, guess what? It’s a myth!

Do all male dogs lift leg to pee?

The thing is, raising the leg when urinating is typically a common habit in male dogs. But that doesn’t mean that every male dog lifts his leg to pee. If your male dog pees in any other position, it doesn’t mean there something wrong with him.

Similarly, while most female dogs squat when peeing, it’s not unusual for a female dog to do her potty business in a different posture.

Why does my dog not lift his leg when he pees?

With that in mind, let’s explore potential reasons why your dog isn’t a leg lifter during potty time:

1. The outcome of neutering

Sexual maturity comes with sexual urges (due to the male sex hormones in a dog’s body) and odd sexual behaviors – like urinating with the leg raised to spread urine everywhere. A sexually mature dog’s urine is full of pheromones that attract female dogs in heat.

Neutering, often recommended when a male dog reaches six months, not only removes the sexual organs but also stops the body from producing sexual hormones for life. That means a male dog won’t feel the need to urine mark and send sexual signals to the females.

If your dog was neutered before he ever got a chance to raise his leg to pee, this might be why he doesn’t. He’s simply peeing like how he was before he reached sexual maturity.

Also, experts say that neutering significantly reduces urine marking desires in over 80% of male dogs and completely eliminates this desire in around 40% of male dogs.

“Neutering will reduce male marking behavior in more than 80% of male dogs but will only eliminate it in about 40% of dogs. Neutering is also recommended for female dogs that mark during estrus. Remember that virtually any vertical object that your dog might sniff and investigate could be a target for marking.”

Chances are that your dog falls under the latter category — his urine-marking desires completely disappeared after neutering. He no longer has the sexual urge to attract female dogs in heat by lifting his leg to spread pee all over.

What if I told you there are twelve common peeing positions that dogs use to urinate?

Believe it or not, there’s more to a male dog’s peeing style leg lifting. In some cases, a male dog’s failure to lift his leg when peeing has nothing to do with neutering.

It could simply be because he finds his current peeing posture more comfortable than the leg lift.

If your dog used to squat to pee as a puppy, then tried the raised leg position when he became sexually mature and found it’s not as comfortable as squatting, he might have decided to do away with leg lifting and stick to what’s comfortable.

3. No motivation to be territorial or dominant

For some male dogs, urination isn’t just about emptying the bladder. To them, every potty session is an opportunity to mark their territory and exert dominance.

Dogs that lift their leg when peeing for territory marking purposes often do so because this pose sprays out pee to a wider area. That way, their strong urine scent will remain in different spots.

He may always pee in the yard while lifting his leg to scatter urine as far as possible so that other dogs nearby can sniff it and know your property is taken.

If your dog isn’t territorial, peeing with his leg raised might be the least of his concerns. He simply has no motivation to territory mark, so he sees no need to constantly lift his leg to spread urine everywhere.

The same goes for dogs with dominance tendencies.

You know how motivational speakers tell you to aim higher?

Some dominant dogs take this advice to heart. If a dog is dominant, he may use every slight opportunity — like potty breaks — to inform other dogs of his dominant status.

Raising the leg makes it easy for a dominant dog to exaggerate his size. If there are dogs watching him pee, they will be convinced that he (the dominant dog) owns the “boss” title.

If your dog is submissive in nature and has zero interest in dominating other dogs, this might be why he doesn’t raise his leg to pee.

4. You’ve not trained your dog to lift his leg

Interestingly, there are dogs that raise their leg to pee because their owners trained them to.

Some dog owners simply prefer watching their neutered dog pee like a typical male dog, and positive reinforcementtraining can make this possible.

This training involves consistent use of commands and treats to make a dog learn to raise his leg each time he pees. So, it’s possible that your dog doesn’t lift their leg to urinate because you haven’t trained him to.

And while training can work, it’s worth noting that it’s much harder to train a dog to raise his leg when urinating if they’ve been peeing using a specific style since undergoing neutering.

This type of training is more effective if it’s done shortly after neutering, not later in life.

5. Your dog had no one to learn from

Leg lifting when urinating is sometimes a learned behavior.

Some male puppies pick up the leg-lifting habit by watching and mimicking other older dogs doing their potty business this way.

If your recently adopted dog didn’t grow up around male dogs that raised their leg when peeing, not having “role models” is probably why your dog doesn’t urinate with his leg up.

He likely learned his current peeing style from the dogs they grew up around.

You need not to worry if your dog isn’t raising his leg to pee if he is doing his potty business in the right location.

But if your dog has been doing the leg-lifting pose all his life, then suddenly switches to other different positions when urinating, consider speaking to your vet.

Your dog could be in pain or suffering from an underlying health problem like an orthopedic condition that needs to be addressed.

How do I get my male dog to lift his leg to pee?

You can get your dog to finally start raising their leg when peeing through positive reinforcement training. The Wag Walking website have put a guide together. It includes three different methods:

Visit the website to see which method suits your dog best.

At what age do male dogs lift leg to pee?

Most dogs start to raise their leg to pee when they turn six months old.