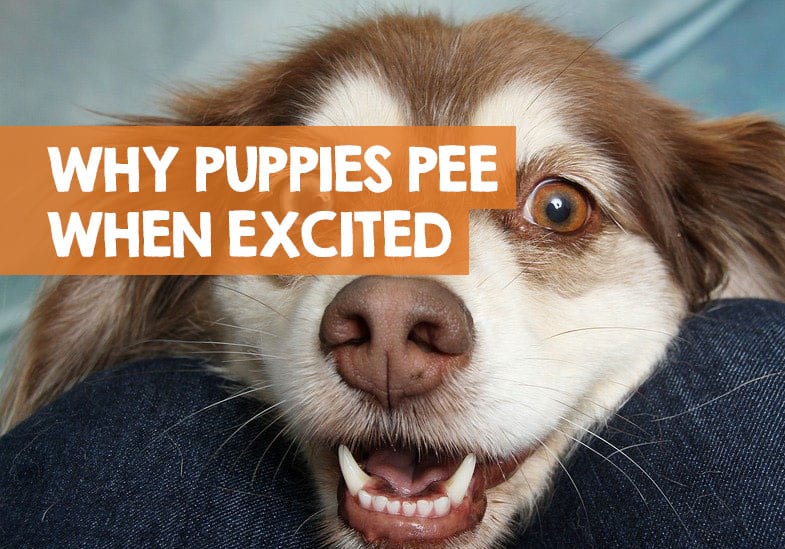 A puppy has a tiny bladder that fills up easily. They have little to no control over when they urinate. They need to pee frequently. Any pet owner who has owned a dog from puppy age will know how much peeing there is. It’s a constant stream of having to mop up their tiny mistakes.

In addition, when puppies are very young, many situations overwhelm, excite, and scare them. Many occasions and emotions from external stimuli can make puppies pee when excited of scared.

Read on to find out why puppies pee when they are scared and excited, when they will grow out of it, and how you can help to stop it with some simple training tips.

Why do puppies pee when they get excited? Puppies pee when excited, scared, and also to show submission. Very much like small children, they don’t yet have the bladder control to stop themselves letting out a little pee when scared or if excited to see someone and during play.

That’s the short answer, but here’s more on the topic which makes for interesting reading and will help you better understand how to stop the peeing problem.

Why do puppies pee when excited or scared?

Puppies don’t develop full bladder control until they are 6 to 12 months old. Because of that, puppies will pee when scared and excited.

Puppies can also pee when acting submissively towards you or other dogs. In this case, it can be that they are peeing due to being scared of a potential threat.

Unlike the smallest kitten that will arch its back to make itself look bigger when threatened, puppies seem to take the opposite approach and instead will act submissively.

Little droplets of urine, especially if the dog is allowed on the bed or furniture, could start to cause a hygiene problem. Fortunately, most puppies will stop peeing due to excitement as they grow older.

Do puppies grow out of peeing when excited?

Most puppies will start to grow out of peeing when excited by the time they reach 6 to 12 months of age. More likely, nearer being one year of age. Dogs grow out of these behaviours naturally.

There are other bad behaviours which will need a more patient approach to training and preventative measures to stop bad habits from forming longer term. I’ve listed those lower down the page.

Why do puppies pee when they see someone?

Puppies get a lot of attention, and none more so than when they meet people. Whether it’s you coming home, or a friend visiting, your puppy knows there’s a lot of fun and attention in store.

This obviously means they will then pee due to the excitement of seeing whoever that person is.

How do you stop a puppy from peeing when excited?

There are a few things you can try to get your puppy to stop peeing when they get excited.

Training a puppy where and when to do its ‘business’ is an art form. It should be started as soon as the pup arrives home. It is a wonderful opportunity to bond with your pet and build its confidence.

1. Managing excitement when you return home

Dogs, much less puppies, seem to have no concept of time. If their owner has been gone for an hour or three days, the welcome is the same. Excitement is at a fever pitch and will result in a lot of pee.

Often the dog’s owner is complicit in causing mayhem because the feeling is mutual. There is nothing more festive than coming home to a cuddly puppy.

Puppies also do not distinguish between your leaving the house or leaving the room. The joy and excitement at seeing you again is the same.

In general, this behaviour by both parties should be discouraged, but even more so when a dog or pup urinates. Below are a few suggestions for lowering the excitement levels.

If these measures prove difficult, perhaps a more practical approach is called for.

Puppies will pee when submissive, many times out of fear of other older and larger dogs.

Puppies that have been adequately socialised will understand their place in the doggy dominance hierarchy. They will submit to larger and older dogs, in order to indicate that they are not a threat, and thereby escape aggression and injury.

They do this by rolling over and exposing their underbelly. They may even urinate a little if the other dog gets closer and they get scared.

The hormones in the urine send out signals that the puppy is immature and does not warrant closer inspection. Hopefully, the older, wiser dog will respond appropriately.

Puppies, and even timid, older dogs may be submissive when confronted with a human being that they perceive to be a threat. This could be just about any person when the dog is young.

Constant verbal reassurance and non-threatening body language will build the dog’s confidence, and should cause it to change its behaviour. Try to view encounters from the pup’s perspective. Below are some tried and tested techniques.

Handy Hint: You need to show your puppy at a young age that you are the pack leader in order to head off dominance issues in the future.

Other possibilities for your puppy peeing when excited

It might not always be due to excitement. Here are other reasons why puppies will pee for no apparent reason.

Physiological reasons for being submissive

Some dogs have nervous dispositions due to trauma or physiological reasons, and need to be handled with kid gloves, possibly for their entire lives. These reasons can be many and varied. Learn to recognise the triggers and respond appropriately.

One of my aunt’s Jack Russell dogs was the runt of a litter of four. From the moment the pups started playing, she would be traumatised and scream like a banshee.

She didn’t learn to play because she was always on her guard. Touch seemed to be a trigger and her ears were particularly sensitive.

She was separated from her littermates and let her be alone with her mother. Eight years later, she still shows signs of submission to us when she has been separated for a while, even peeing a little if scared.

She does not interact easily with strangers.

She appears to have an abundance of confidence in the morning but less as the day wears on. She is very vocal and demands affection but responds erratically when she is not the initiator.

My aunt has learned to wait for her to make the first move and try not to surprise her or touch her ears.

Dogs that have suffered abuse

A friend of mine owns a rescue dog which had ten strikes against her when found her on the side of the road. Not least of these was a broken leg that was infected, and ultimately had to be amputated. The vet estimated that she was around six months old.

For the most part, she is a happy, bouncy dog but she cannot cope with being reprimanded. Unfortunately, she has the memory of an elephant and if she has once heard you raise your voice, she expects it to happen again.

In the first year, after they found her, she would go into ‘fright mode’ at any notion of a threat, and completely empty her bladder. Even overt affection would trigger an episode of peeing.

They have learnt to pre-empt this and to coax her to do what they need her to do, rather than to command her. They do this by talking softly to her and stroking her until her mood lifts. They have been known to offer the odd bribe or two.

Dogs do mark their territory, and like rhinos, will return to the same spot repeatedly. If any urine has fallen on a spot, do the following:

As soon as the pup is old enough, have it neutered to remove the urge to leave its mark.

Handy Hint: I was once asked whether dogs pee out of spite; what I discovered was very interesting and provides great insight into the canine mind.

If all other factors have been discounted, it may be that your pup has a urinary tract infection or problems with its bladder. This warrants a call or a visit to the vet to determine the cause and to get treatment.

All puppies let out a little pee when they get too excited due to play or seeing someone. Some will pee out of fear too, and this aspect can continue into doggy adulthood.

However, the excitement urination is something most puppies will eventually grow out of.